John McMullen: Eagles lack the political capital to go after Trey Lance (or any other QB) in NFL Draft 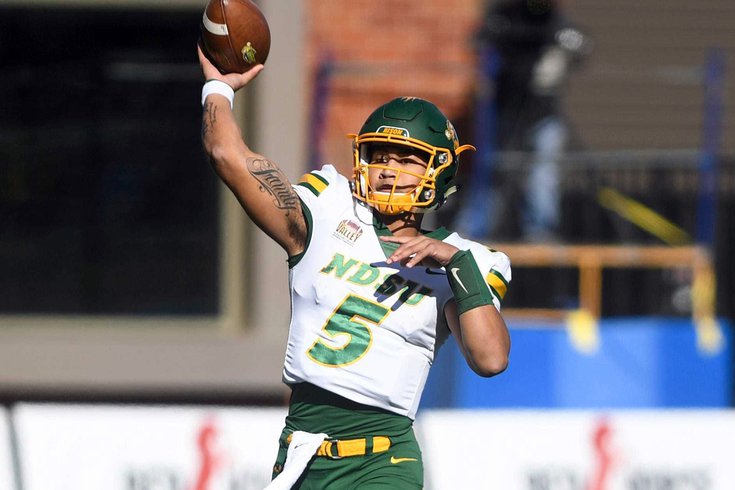 Jeffrey Lurie has already reportedly instructed his personnel department to take Lance — and the other quarterbacks who might be available at No. 6 in April's draft, like Ohio State's Justin Fields and Alabama's Mac Jones — out of the equation.

The intent is to build around second-year signal caller Jalen Hurts, to both avoid the tricky political winds in the wake of the Carson Wentz divorce and inject some calm after the upheaval of opening up a quarterback factory with no emotional intelligence.

In the case of Lance, that tact only becomes problematic if the latest North Dakota State product becomes a real star at the professional level over the next number of years.

The odds are always against that. For every Patrick Mahomes, there are a dozen Wentz-types who show flashes only to flame out for a variety of reasons.

Here in Philadelphia, Wentz looked like a superstar early in his career until a torn ACL and LCL was followed by stress fractures in his back and a scary concussion. Couple that with personality quirks and a tendency to rely on God-given ability rather than the tedious fundamental work, sprinkle in a little resentment toward Lurie and Howie Roseman for taking Hurts in the 2020 draft, and voila, you have the toxic cocktail of Wentz to Indianapolis for pennies on the dollar, along with a historic dead-money hit that will become official on Wednesday.

However, Lance’s grade as a prospect has nothing to do with Wentz unless you believe the two being friends due to their NDSU roots is meaningful. And if you do, the new flavor of the month from Fargo has something in common with Hurts as well in the form of their relationships with personal QB tutor Quincy Avery.

The Eagles played the game at Lance's high-profile Pro Day at the Fargodome last Friday, sending offensive coordinator Shane Steichen and quarterbacks coach Brian Johnson to take everything in. That's a far cry from 2016, however, when the real brass was there and Lurie himself was spotted taking Wentz out to dinner.

Having a presence, though, brings plausible deniability to the table just in case Lance reaches the high ceiling and not the low floor of a prospect who only played in 17 career college games, all of them against FCS-level competition. The Eagles can just point back to the Pro Day, say they kicked the tires and felt [insert name] was the better prospect.

That's standard operating procedure around the NFL, where everything from groupthink to recency bias to yes, owner autonomy, is thrown into the same pot of stew defined as due diligence — but is perhaps better described as covering one's ass.

In the wake of Wentz leaving Philadelphia, and Lance preemptively disqualified from taking the baton with the Eagles because both players happened to wear the same college helmet, it was interesting to get Randy Hedberg's take on both players as we speed toward the draft.

Hedberg, now 66, was a former NFL quarterback with Tampa Bay for a short stint in 1977 and coached both Wentz and Lance as the QB coach with NDSU.

Following the Bison Pro Day on Friday, Hedberg was asked about both his former prodigy and current wunderkind.

“I think the biggest thing I saw in reference to Carson [in 2020] is I didn't think you got protected very well up front, so when you don't get protected well up front it's hard on quarterbacks. I've been there, so I know how that works,” said Hedberg, who was dumped 15 times in limited action in what was the second year of an expansion team.

Wentz was buried 50 times in his 11-plus starts with the Eagles playing a record 14 different offensive line combinations last season.

When comparing his two top-of-the-draft students and what differentiates them, Hedberg pointed to experience.

“The major difference is, Carson was a fifth-year senior, and Trey is a third-year sophomore,” the coach explained. “So, there’s a little difference in age. But I think they both have the ability to throw the ball with some accuracy. I think Trey is really advanced in his knowledge of defenses, just like Carson. So, I think there are some similarities there.”

Lance is the more athletic player, however, and perhaps fits in a little better when you factor in the evolution of the modern NFL game.

“We didn’t run the ball a lot with Carson – the quarterback run game – quite as much with Carson as we did with Trey,” Hedberg admitted, noting the 30 runs for 166 yards and one touchdown Lance had in the 2020 FCS title game against James Madison. "Trey was a little bit better runner in our minds than Carson was at that point. That’s a major difference. I think the age is the major difference I see, but I also see a major upside for Trey Lance going to the next level.”

Lance will turn 21 in May while Wentz, now 28, was 23 when the Eagles made him the second overall pick in 2016. Reaching back to his experience with an awful Bucs team, Hedberg noted the best option is always a little bit of time to get acclimated.

“I’m going to say this because when I was a rookie in the NFL, I played, and I wasn’t ready to play,” said Hedberg. “And I really think it affected me. I said the same thing when Carson came out – I would hope that he was able to sit back and learn from a veteran player."

That wasn't the case, of course, and Wentz was forced into action after a devastating injury to Teddy Bridgewater in Minnesota caused the Vikings to overpay for Sam Bradford, opening the door for Wentz to take over Day 1. Wentz persevered and played well at times before taking off in 2017 until being derailed by the injuries and then off-the-field concerns.

None of that would be the case for Lance in Philadelphia, where Hurts is just learning himself after taking over for Wentz for the final month of last season.

“The biggest thing for me is just controlling what I can control and not worrying about what I can’t,” said Lance. “I played every game I possibly could in college. It would’ve been great, I obviously was anticipating (playing) last year and win another national championship in January. But it didn’t work out that way.”

The lack of playing time was not Lance's fault. He led NDSU to an undefeated 2019 season and another FCS National Championship. Lance would have been raring to go in 2020 but the school decided to not play a full fall season due to the pandemic. By that point, a spring season was off the table for Lance because he had to prepare for the draft.

“The biggest thing is, they [NFL personnel] wonder if just the 17 games — does that give him enough pictures that he’s seen? Different pictures from defenses. That’s the biggest question I’ve gotten from different people," Hedberg said. "It would have been nice to have a full season for him last fall, so he could have potentially played 15 more games. But that didn’t happen – that’s not how it worked out for him. That would have helped him in the long run.”

The silver lining to the pandemic was Lance finding Avery in Atlanta, the same personal tutor of Hurts, Deshaun Watson, and many others in an effort to get ready.

Instead of game-planning for the next opponent he was going to beat by 40 at what is essentially the FCS version of Alabama, Lance was honing in on himself for eight hours a day Monday through Friday. It was footwork, eye placement, combine throws and film study.

While NFL coaches typically lament that you can't replicate live reps, they also tend to gripe about the mechanical deficiencies being ignored at the college level.

In theory, Lance has a leg up on correcting issues like that and Avery was front-and-center Friday, scripting the 66-throw session in which the ball rarely hit the turf.

“The footwork was outstanding," former Eagles scout and NFL Network draft analyst Daniel Jeremiah noted. "… The other thing (they) wanted to showcase was his delivery. There are times he can get a little elongated and the ball will drop down a little bit, I thought he was more consistent with that."

Of the top QBs in this draft after Clemson standout Trevor Lawrence, the consensus No. 1 overall pick, Lance is right there with Fields as the options with the highest ceiling. Most scouts also claim he has the lowest floor. In other words boom or bust.

That story will ultimately be told in another town, however. The Eagles are booting up on safe mode these days. There have been too many busts to bet on a boom.