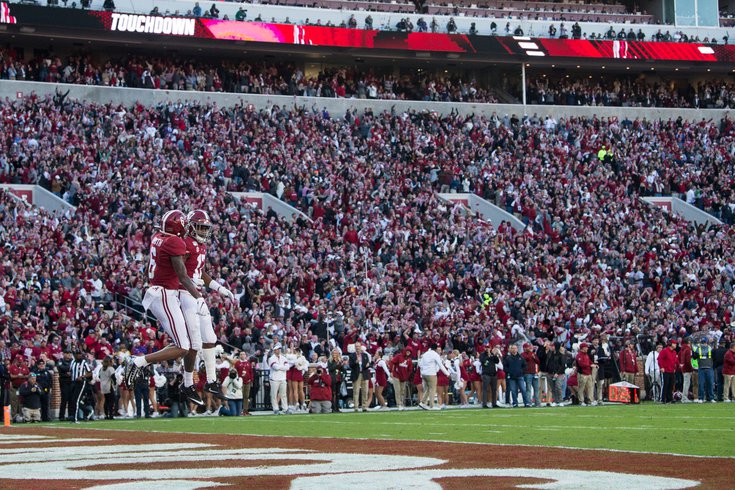 The Eagles need a quarterback and maybe the better plan for finding one lies in their supporting cast.

Think of it this way — instead of searching for Superman how about outlawing Kryptonite?

In that Bizarro World, whenever the Man of Steel actually does show up in the form of Jalen Hurts or the more likely TBD (to be determined), opposing defensive coordinator Lex Luthor won't have multiple plans in the can to derail him.

When the autopsy is finally finished on the Carson Wentz Era in Philadelphia, the cause of death is not going to be cut-and-dry. There are plenty of co-morbidities to report, everything from injuries to the coaching changes to the signal caller’s personality. Deep into the explanation, however, you should certainly find at least some discussion on the supporting cast the soon-to-be Indianapolis Colts’ QB had to endure in the 2020 season.

Everything on the Eagles’ offense underperformed last season, creating a circular firing squad of catch-22s that resulted in the tortured experiment of Doug Pederson, Press Taylor, Rich Scangarello, and Marty Mornhinweg being replaced by the more targeted offensive brain trust of Nick Sirianni, Shane Steichen, Kevin Patullo and Brian Johnson.

As bad as Wentz was, the offensive line he was playing behind went from top 10 and often top five to bottom 10. The receivers continued to put up historically poor numbers in the most pass-happy era in NFL history, Zach Ertz had a career-worst year in what’s sure to be his last in town, and even explosive running back Miles Sanders engaged in a Wentz-level regression as a receiver and pass protector during his second season, typically when players are expected to take major leaps forward.

With the Eagles having so many issues and so little money from a salary-cap standpoint, they will not be able to fix all the problems during one offseason, but the landscape foreshadows the ability to close the book on one — the WR issues.

The answer will almost assuredly lie at No. 6 overall because it involves multiple options with one almost sure to be available with no wrangling or crossed fingers needed, a group that includes LSU’s Ja'Marr Chase, and the Alabama duo of DeVonta Smith and Jaylen Waddle.

Addressing WR is probably not what Howie Roseman wants to do for two reasons: the Eagles have already invested significant assets at the position over the last two drafts — second-rounder J.J. Arcega-Whiteside in 2019 and Jalen Reagor as a first-rounder in 2020 — and the organization typically only values certain positions that high in the process, most notably QB and the offensive and defensive lines.

The problem is that there is no guarantee a QB will be available at No. 6, and there are no defensive linemen graded that highly. The O-Line features two possibilities — Oregon OT Penei Sewell and Northwestern OT Rashawn Slater.

By picking a WR at six, the Eagles would be admitting past failures and straying from organizational DNA that has been proven to be a successful formula over the past two decades. Countering that argument is the number 539, Travis Fulgham’s team-leading receiving yards in 2020, something that is also the high-water mark at the WR position over the entire 2019-20 span.

Last season, 18 NFL players reached the 1,000-yard barrier, including TEs Travis Kelce and Darren Waller, and 82 total players managed more yards than Fulgham, including 15 TEs. In other words, 2.65 players per the NFL’s other 31 teams had more receiving yards than the Eagles’ top producer, a late-August waiver-wire pickup.

The empirical evidence pales in comparison to the eye test DeSean Jackson provided us in the rare moments he was healthy during his second stint with the Eagles. In practice, the now 34-year-old, who was released earlier this month, looked like he invented route-running when compared to everyone the Eagles ran through this offense at WR. Jackson’s big plays during his rare cameos also highlighted what was missing.

When Chase runs his 4.45 at LSU’s Pro Day on March 31, he likely becomes the one player out of the Eagles’ reach, leaving two debates for Roseman and vice president of personnel Andy Weidl: do they stray from conventional thinking, and if so, what’s the favorite flavor at The Baked Bear in Tuscaloosa? Heisman-level production from an undersized playmaker or the ceiling of scary traits coming off a broken ankle?

A true WR1 would then allow the pieces already on hand like Reagor, John Hightower, Quez Watkins, and yes, even JJAW, to fit into more comfortable roles resulting in more production for a young QB who is going to need plenty of help.