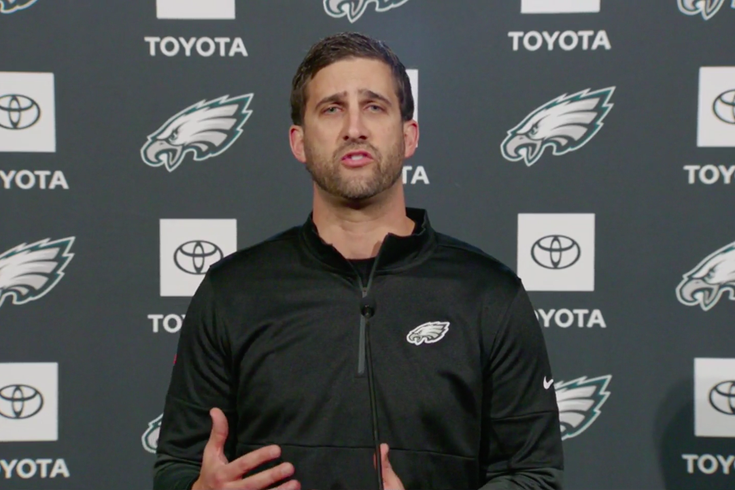 This question always has a high possibility of landing you in an @OldTakesExposed tweet. A lot of folks had Doug Pederson as the worst hire during the 2016 cycle, like ESPN here. Oops!

1) Brandon Staley, Chargers: I like Staley as a young up-and-coming coach, but also, the Chargers might actually be good. In the short term, it'll be hard not to improve on a 2020 season that started at 3-9. Long-term, Justin Herbert will keep them competitive.

2) Robert Saleh, Jets: The Jets have a buttload of picks, and Saleh feels like the right man for the job to get the most out of what will be a very young roster.

3) Arthur Smith, Falcons: The Falcons are in a similar situation as the Eagles, in that they require a bit of a teardown before they can rebuild, but I'll give a slight edge to Smith over Nick Sirianni.

4) Nick Sirianni, Eagles: The bet here is that the first two seasons won't be pretty, but it appears that Sirianni will be given a bit of time to turn things around. An unexpected decent season in Years 1 or 2 would exceed expectations.

5) Urban Meyer, Jaguars: Bad guy, and I hope he fails miserably. He's off to a bad a start.

7) David Culley, Texans: This is nothing against Culley. That Texans organization just looks like it's an impossible situation.

Question from Dan: About how much cap space do the Eagles need strictly for signing the number of draft picks they have?

The short answer? Not much. OverTheCap.com has a projection of the salary cap numbers for every draft slot, and even with the sixth overall pick, if the Eagles "stick and pick," that player's cap number in 2021 will be a projected $3,376,576.

But the reality is that you don't need an extra $3,376,576 to sign him. Because only the top 51 cap numbers count, whenever that sixth overall pick is signed, whoever was 51st highest contract on the roster won't count anymore. Let's just say that player has a cap number of $850K, for example, the Eagles would only need an extra $2,526,576 to sign that top pick.

The rest of their scheduled picks would have projected Year 1 cap numbers of under $1 million. The Eagles shouldn't need more than an extra $5 million or so in cap space to sign all their picks.

Question from cormeagles: Col Kempski, say we roll with Hurts, he doesn't look good, Eagles go 3-13 and have Top 4 pick next year. What is the early projection for the 2022 QB class?

This time last year, there were three quarterbacks – Trevor Lawrence, Justin Fields, and Trey Lance – who were all likely going to be high picks. Zach Wilson was the surprise guy to emerge in 2020.

Looking forward to 2021, there are zero quarterbacks who are slam dunk future first-round picks. I would say that Ben Fennell of NFL Network hits on the four most commonly mentioned guys here:

Peeking down the road, 2022 doesn't appear to be a strong QB Class. Could impact decisions in the 2021 cycle

...but remember, Zach Wilson & Joe Burrow weren't considered Top 10 picks before their seasons. A lot can change in a year

That would be Sam Howell of North Carolina, Kedon Slovis of USC, Desmond Ridder of Cincinnati, and Brock Purdy of Iowa State. My favorite of that group is Ridder, who I profiled a couple months ago, and who I thought would go Day 2 or early on Day 3 if he declared for the 2021 draft.

But overall, as Ben notes, at this stage it's not looking like a strong group overall.

Also from cormeagles: Col. Kempski, with the Eagles being at least 2-3 years away from competing, I don't see a reason to keep anyone on the roster over the age of 27 or so. But which 27+ players are the Eagles practically stuck with due to contract structure?

To begin, I think your threshold for what is now an old player is skewing a little too low. I mean, Dallas Goedert is 26, and he's only been in the league three years. So let's just do 30+ year olds. The Eagles would have huge dead money cap hits on the following players if they cut or traded them:

And that list doesn't even include a bunch of other 30-somethings like Alshon Jeffery, DeSean Jackson, Zach Ertz, and Malik Jackson, who are all almost certainly gone this offseason, all with sizeable dead money hits.

Question from SPQR13: Which player in the draft is most likely to win the award of "Highly rated, looks talented, had good college production, but as soon as the Eagles draft him he will suck" award?

That’ll pretty much be whatever Pac-12 player they take on Day 1 or Day 2. For the sake of being able to link back to this mailbag in three years to point out my amazing call if I get it right (and completely forgetting about it if I don’t), I’ll go Paulson Adebo, CB, Stanford.

Question from Mig: Who is more likely to go from worst to first this year? Jaguars or Eagles?

The Eagles are a year behind the Jaguars. They still have to tear their roster down before they can rebuild. The Jaguars are going to draft a no-brainer No. 1 quarterback prospect in Trevor Lawrence, while also having over $82 million in cap space, most in the NFL.

The Eagles play in the trash NFC East, which means that anything is possible, but it's not exactly as if the AFC South is any good either. The Eagles should envy the position the Jaguars are in.

Question from Arby1: Who's the better draft prognosticator: Rich Gosselin or Daniel Jeremiah?

Gosselin doesn't do them anymore, but when he did he was the 🐐. That dude would just journalize the crap out of the draft. I remember that during the first Combine I ever covered (2011, I think?), he had his recorder in on every possible prospect he could interview, and always had a relevant questions. I respected that energy.

There's actually a site called The Huddle Report that tracks writers' final mock drafts. I'm in there. They call me "Jim" Kempski. That'll happen sometimes when people (I think) feel a little weird calling a grown adult "Jimmy," lol. I have a 37 in 2016 that I'm looking forward to getting off of my five-year average this year. If I can get something in the 40's I'll climb the ladder a bit.

They've only been tracking Jeremiah for two years, but he's off to a good start with a pair of 43's.