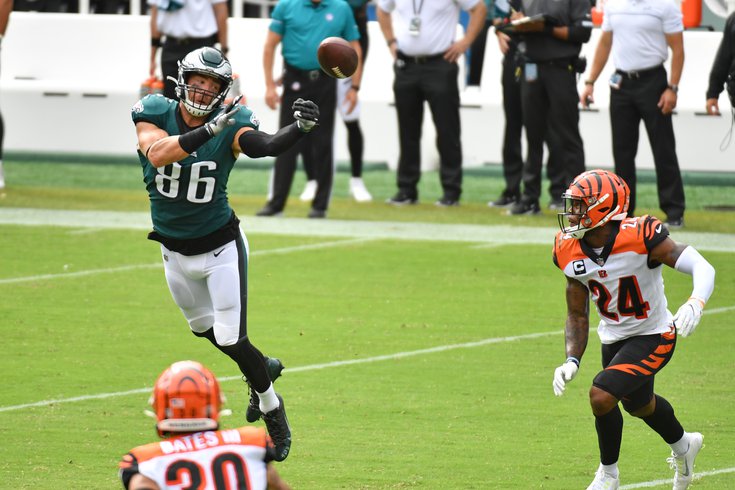 In 2015 and 2016, one of the biggest issues for the Philadelphia Eagles' lack of success was the play of the wide receivers, specifically, their penchant for dropping catchable passes. They corrected that issue somewhat in the Super Bowl season in 2017, and then again in 2018, at least during the regular season. In 2019, drops in extremely inopportune times helped cost the Eagles games against the Falcons, Lions, and Dolphins.

In 2020, Eagles receivers and tight ends weren't good, collectively, and they had their share of drops, but there were really only a few egregiously harmful ones. Dropped passes were somewhat of an issue, but they were very far down on the list of reasons the Eagles went 4-11-1. Here they are:

For some reason, as heavily as the NFL is covered from a statistical metric standpoint, there are no reliable sources for drops. While drops are subjective to some degree, the following is a representation of the number of drops by each Eagles player in 2020.

The following players had no drops in 2020, and at least one catch (number of catches in parentheses):

The biggest offender, from a total number of drops standpoint, was Sanders, with seven. Sanders also led the team in 2020 in drop percentage among players with at least 20 catches, with a bad drop rate of 20 percent. That puts him second in single-season drop rate during the Doug Pederson/Carson Wentz era. Zach Ertz also made the leaderboard, but we'll get to him momentarily.

Sanders was very effective as a runner in 2020, averaging 5.3 yards per carry and breaking off several long runs, but his regression as a receiver in 2020 was surprising and disappointing. As a rookie, Sanders had 50 catches for 509 yards (10.2 YPC) and 3 TDs. He was a weapon as a receiver both on short throws, and down the field. We had him down for 3 drops that season, or a drop rate of 5.7 percent.

But beyond just the drops, the Wentz-Sanders connection just wasn't there in 2020. Even when Sanders got open, Wentz often didn't hit him, with the most damaging miss coming against the Bengals Week 3:

Whether it was a sharp decline in skills or unhappiness over his contract situation, or both, Ertz just wasn't himself last season.

Hightower made play after play after play in training camp. It didn't translate to the real games. He had two of the most egregious drops in the video above, and only had 10 catches on the season.

On paper, Reagor's drop numbers (1 drop vs. 31 catches) look good. However, in watching every incomplete pass on the season, he lost more contested catch opportunities than he won. We didn't count those as drops, but he has to start making more catches while battling with opposing corners.

This year was different, as Wentz had an extraordinary number of easily completable throws that he simply missed, and often wasn't even close, whereas in other years, his incompletions were more "normal," if that makes any sense.