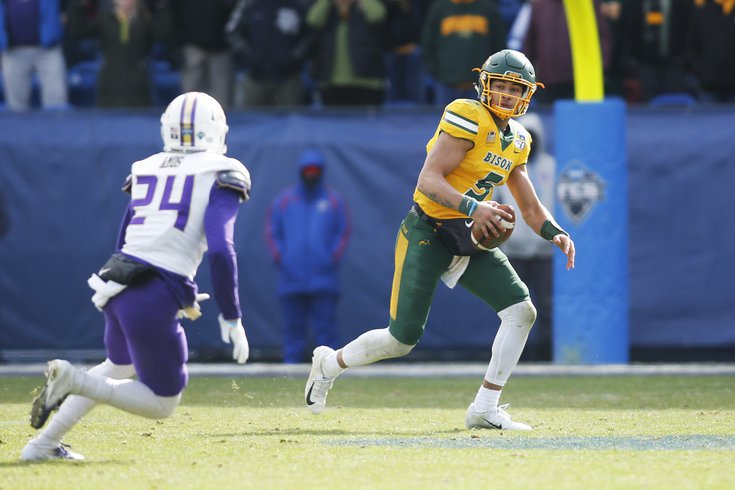 The Philadelphia Eagles will surely add quarterbacks this offseason, with Jalen Hurts currently serving as the only one on the roster. It's really only a matter of what kind of resources they will put into the position. Would they take one with the sixth overall pick, or even trade up for one? That will depend heavily on what the Eagles think they have in Hurts. In case you missed our review of Hurts' rookie season, you can find that here.

On Wednesday we started with Wilson. Today we'll cover Lance.

For this exercise, I watched Lance's four playoff games in 2019, against James Madison, Montana State, Illinois State, and Nicholls.

In 2020, Lance was poised to build on his 2019 campaign and steamroll toward another chip, but COVID hit, and NDSU only played one game, a win over Central Arkansas. Lance threw his first and final college INT in that game.

Back in 2016, the Eagles had to wrestle with how Carson Wentz would transition from Division 1-AA football to the NFL. On the one hand, obviously he was playing against a lower level of competition. On the other hand, he was coming from a college offense that employed its share of pro-style concepts, which arguably put him in a better position to make the jump to the NFL than guys like Ohio State's Cardale Jones or Memphis' Paxton Lynch, to name two examples, who ran more basic offenses.

But then on top of worrying about Lance making the jump from NDSU to the NFL, you also have the fact that Lance only attempted 318 passes in college (vs. 612 for Wentz), and he only started 17 total games. If you're drafting Lance, you're doing so because you're willing to take a big leap of faith on his physical traits.

Lance is listed at 6-foot-4, 226 pounds, and is built like a brick house. The comps you'll see for him include Steve McNair and Cam Newton. On the field, he can run by you, or run through you, and he is likely to test well at his pro day.

Lance's physical profile – his size, strength, and speed – is his biggest appeal.

Lance completed 65.4 percent of his passes and only threw 1 INT over his college career, so his accuracy looks good on paper. However, I wouldn't exactly call it a strength, especially on deep throws down the field. While Lance did connect on his share of bombs (sometimes right on the money), he also left a bunch of big play opportunities on the field, and he misses in all directions. He'll overthrow, underthrow, he'll throw too far inside, and he'll throw the ball five yards out of bounds.

But he'll also miss his share of layups too, in which he'll either short hop the ball to receivers in the flat, or his ball placement will be a little off on completions to receivers on the run, causing them to slow their strides, thus limiting YAC potential.

No concerns there. He can rip it.

Lance's running style is similar to that of Jalen Hurts', in that he's a competitive runner who can break tackles, and is willing to initiate contact with defenders.

More often than not, the first defender couldn't bring Lance down. That'll change some in the NFL, but the point remains that getting him to the ground isn't easy. Lance had more than his share of pile-moving runs, like the one shown here at the 2:02 mark:

Of course, there's a downside to that, as quarterbacks with that kind of style tend to have far shorter shelf lives than pocket passers. He's going to have to be more judicious about when to get extra yardage and when to give himself up in the NFL.

Lance's actual arm release is fine. However, he has a quirk that will have to be fixed by whoever drafts him. When he throws deep or puts something extra on the ball on tight throws in the intermediate part of the field, he'll dip his back leg, and explode with his lower half to get more juice on the throw. For example:

That's gotta go. In the NFL, you don't have time for that added hitch, and that extra movement is likely affecting his accuracy on power throws.

I didn't think Lance bailed from the pocket too early when the rush was closing in, which is a plus. The concern for me would be that he was too reliant on being able to shake off pass rushers because he has the physical ability to do so. As Eagles fans saw repeatedly throughout Carson Wentz's tenure, that approach led to a lot of fumbles. Lance had four fumbles in 2019, which isn't a huge number, but they don't make pass rushers at Montana State like they do in the pros. In the NFL, those guys will get the ball out.

Lance commonly converted third and long plays with his legs, and as you would expect from a player with his athletic profile, he was able to escape the pocket and make off-schedule plays. (I will note here though that throwing on the run did not seem to be the strength that I had anticipated.)

Throwing 0 INTs in 2019 sort of speaks for itself. Lance is clearly a good decision-maker. He also never looked rattled in any of the games I watched (all playoff games), though to be fair, the Bison just about always had the lead. There is virtually no tape of Lance playing from behind. Obviously, winning every game is great, but it would be nice to see how he would have dealt with more in-game adversity. As for his toughness, watch any game of his and note how he pops right back up after every big shot he takes as a runner.

But Carson Wentz came from North Dakota State, and that eventually ended badly. Should we put any stock into that? 🙄

It depends on how patient you're willing to be with him. If you want immediate results from a positional player, you'll get that from guys like Penei Sewell, Ja'Marr Chase, or DeVonta Smith.

However, if you really value the quarterback position (as the Eagles do), and you're not sure of what you have in Hurts, Lance is a more physically gifted player with a higher ceiling. He's just going to need time to iron out the kinks, and become a more accurate passer.

You draft Lance if you think he can be the next Josh Allen, who was another physically gifted quarterback with accuracy issues coming out of a small school. Allen had a spectacular 2020 season, but he went through bumpy times before he got there.

Whether the city of Philadelphia will have the patience to allow a guy like Lance to succeed is a debate for another day, but if you're the Eagles, you better feel good about his ability to shrug off criticisms and stay off of social media as he grows as a player.

Spoiler: The Eagles are not going to be good in 2021, and they probably won't be good in 2022 either, so they feel like a reasonable landing spot for a quarterback who may need a few years before he can really begin to shine.