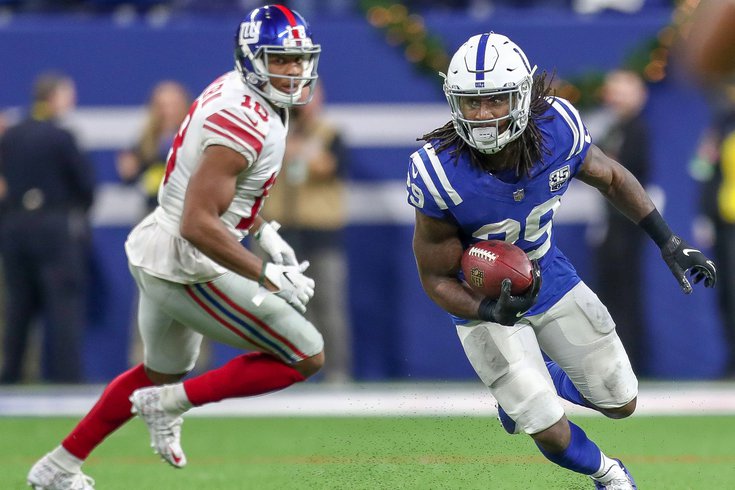 Here are three free agents that I believe make sense for the Eagles in free agency this offseason. Yes, I'm aware they're underwhelming. Here was version 1.0, in case you missed it.

Hooker was a very talented prospect in the 2017 NFL Draft who went a pick after the Eagles selected Derek Barnett. He got out to a fast start as a rookie, picking off three passes in his first four games. In his seventh game with the Colts, Hooker tore his ACL and MCL, ending his season.

He recovered in time to start the 2018 season, and had a pair of solid seasons both in 2018 and 2019, though he missed the Colts' Divisional Round loss to the Chiefs after the 2018 regular season, with a foot injury.

In 2020, Hooker tore his Achilles Week 2. Add in a pair of surgeries during the 2017 offseason for a double sports hernia and a torn labrum in his hip, and he has quite an extensive injury history. As such, he could be an affordable option for the Eagles this offseason.

When healthy, Hooker is a good starting NFL safety, and he's still only 24 years old. A look at a highlight reel from the 2018 season:

Hooker would make sense as a replacement for Rodney McLeod, who is recovering from his second ACL tear in three years, and who could end up starting the 2021 season on the PUP list.

And of course, stating the obvious, Hooker played for new Eagles defensive coordinator Jonathan Gannon in Indy, and could serve as a player who who already knows the system and can help his defensive backfield teammates during the offseason.

Witherspoon is a former early third-round pick of the Niners, who showed intermittent moments of promise over his four years in San Francisco, but was never really able to keep a starting job on lockdown. He had a good rookie season in 2017, followed by a disappointing 2018.

In 2019, Witherspoon started strong, but would eventually be benched during a Niners playoff win over the Vikings in favor of Emmanuel Moseley, who would continue to start at corner opposite Richard Sherman through the remainder of the Niners' postseason run. It should be worth noting that even after Witherspoon got benched during that Vikings game, he asked if he could take Moseley's special teams snaps so that he could help out in any way.

In 2020, Witherspoon was a bench player for the majority of the season, and was even a healthy scratch for three games in November. However, he started three games late in the season when the Niners suffered some injuries, and played well. In one of those starts, he had a red zone INT of Kyler Murray that helped seal a win.

At 6'3, 195, Witherspoon has the size to play on the outside, and he also has some appealing athletic measurables:

Witherspoon shouldn't cost much, and he is a young player with some experience who finished his final season on an upswing.

Ross was the ninth overall pick of the 2017 NFL Draft, and he has been a bust. For his career, Ross has 51 career receptions for 733 yards and 10 TDs. Of course, Ross went top 10 because he ran the fastest 40 time in NFL Combine history:

If you'll notice, Ross injured himself running that record-breaking 40, and injuries continued to follow Ross throughout his four-year tenure in Cincinnati. He missed 13 games as a rookie in 2017 (though some of those were as healthy scratches), 3 games in 2018, 8 games in 2019, and 13 games in 2020. All told, Ross only played in 27 of a possible 64 games (42 percent). He also requested to be traded during the 2020 season, but the Bengals didn't appear to have any takers.

So why should the Eagles have interest? Well, most importantly, he should be a cheap buy this offseason. But there was also at least of glimpse of what Ross could be during the 2019 season, when he had 28 catches for 506 yards (18.1 YPC) and 3 TDs in 8 games, putting him on pace for over 1000 yards. Here's what some of that looked like:

If Jalen Hurts is the Eagles' starting quarterback in 2021, I would expect them to be a run-heavy offense. In the way that Marquise Brown helps keep opposing defenses honest in Baltimore, allowing Lamar Jackson room to operate as a runner, Ross can potentially have a similar effect for Hurts.

Of course, the Eagles spent three picks on speedy receivers during the 2020 draft in Jalen Reagor, John Hightower, and Quez Watkins. But Ross is actually only 6 months older than Hightower, so why not also add possibly the fastest player in the NFL to the mix, and see who emerges?