From a trade request to a ticking clock, NFL insider explains how (and why) the Wentz deal went down

And it all apparently started back in April when the Eagles drafted Jalen Hurts... 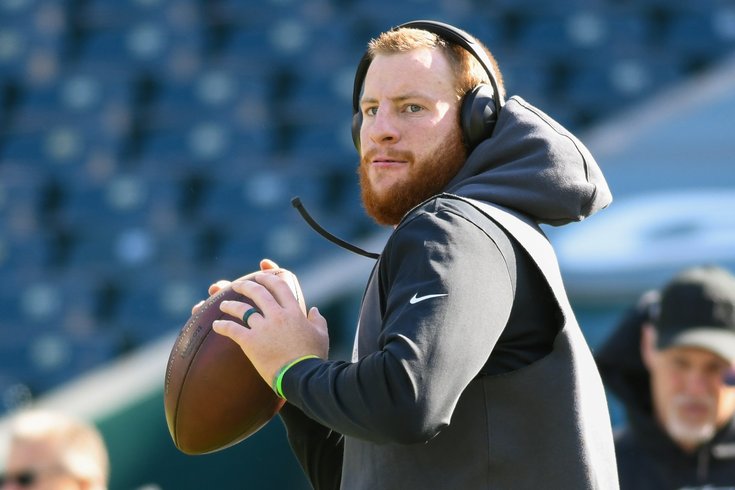 Carson Wentz's fate was sealed the minute the Eagles selected Jalen Hurts with the 53rd overall pick in the 2020 NFL Draft. Not because the team was overly enamored with Hurts or even took him to be Wentz's replacement at quarterback, but because it seems like Wentz thought that's what was happening.

Less than a year after handing their young quarterback a massive four-year contract extension that should have solidified his place under center for the next half decade, the Eagles decided to spend valuable draft capital on a former Heisman runner-up, and that seemed to rattle Wentz.

Right there, the minute he let that doubt creep into his mind, it was over. In order to be an elite quarterback in the NFL, you need to have supreme self-confidence, the kind that would come off as arrogance in any normal person. It's not a bad thing — it's actually part of what makes the good ones great. Look at Drew Brees. Do you think he's looking over his shoulder at Taysom Hill? The Packers went and drafted a quarterback in the first round and all Aaron Rodgers did was go out and win the MVP award. Wentz, meanwhile, went the opposite way.

Maybe the cracks in his self confidence started years earlier when he watched backup Nick Foles come on to finish what he started and bring Philly its first Super Bowl.

Maybe drafting Hurts was just the final straw that bust open the dam.

And that brings us to the latest Monday Morning Quarterback column from Albert Breer, in which the NFL insider offers up an in-depth breakdown of not just the Wentz trade itself, but some of the contributing factors that led to the Eagles absorbing the largest dead cap hit in NFL history.

Let's take a look at some of the biggest takeaways from Breer's piece as well as how they line up with our own reporting and some of the other reports that have been out there in recent days/weeks/months, and we'll start back in April 2020, about 10 months ago, when Roseman and Co. decided to take a QB out of Oklahoma in the second round of the draft...

Wentz indeed felt threatened by Hurts, even with that massive contract. And it dates back to early in the season, long before anyone was seriously considering a move to the rookie, when Hurts was simply a gadget quarterback brought in to mix things up.

Things worsened in 2020. The Eagles took Hurts 53rd in April, a move that completely blindsided Wentz. And, as I understand it, the pick was taken by him, right or wrong, as a message that he might not be quite as secure as he thought he was when he signed his four-year, $134 million extension a year earlier.

Then, the season played out and, with an aging and injured offense around him, Wentz cratered. Hurts was elevated to backup in Week 2, and put on the field in a Wildcat package, which only led to Wentz asking more questions, since he ran the same zone-read concepts Hurts was running both at North Dakota State and in his early days as a pro. And by then, Pederson and Wentz’s relationship—remember, Pederson had been the good cop—was fracturing.  [si.com]

There were reports that Wentz and Pederson didn't talk for months. And while that seems impossible while Wentz was still the starting quarterback, the belief here based on our own reporting is that Wentz and Pederson did speak while he was still the starter, but only when it was necessary, like during meetings or on game days. However, whatever previous personal relationship there had been between the two no longer existed.

And according to Breer, once he got benched, the two only communicated via text message.

Wentz was benched in a Week 13 loss to the Packers, after posting a 57.4 passer rating through three and a half quarters, and didn’t play another snap for the Eagles after that. He and Pederson communicated only via text after the coach made the benching permanent later that week, and Wentz didn’t address the Philly media again.  [si.com]

I've never heard a player or colleague say a bad word about Doug Pederson. He's the definition of a players' coach. But he also seems to be liked by ownership as well, as Lurie sung his praises on his way out the door, even going so far as saying that he didn't "deserve" to be fired. So, what the hell happened between him and Pederson? Was it just the benching? Was it bringing in Hurts to run gadget plays? Was there some other feud going on between the two?

It seems like every new answer we get only brings out more questions, questions that can only be answered by Pederson and Wentz themselves. And unfortunately, we'll likely never get the full explanation, only the one they want to give us.

There's been a lot of back and forth about whether or not Wentz actually requested a trade. Breer shed some new light on that on Monday.

Soon after the season ended, Roseman and Wentz’s agent, Ryan Tollner, got on a call. Tollner and Wentz had debriefed, and Tollner passed along his own feelings on the situation, that he wasn’t sure Wentz would be at his best, for a multitude of reasons, in Philly anymore—and that the time might be right for the Eagles to get value for Wentz in a trade and Wentz to get a fresh start elsewhere.

Roseman responded that he wasn’t sure if he was open to it yet. But he gave Tollner the authority to feel out potential suitors. Tollner’s first call was the easiest one to make. Based on Wentz’s relationship with Colts head coach Frank Reich, forged by their two years together in Philly, the agent didn’t hesitate to reach out to Indy before anyone else.  [si.com]

At this point, saying Wentz didn't request a trade is semantics. Asking for a fresh start and having your agent be allowed to start exploring trade interest is the same thing as requesting a trade. Just because he didn't stomp his feet and threaten not to report if he wasn't dealt doesn't mean he didn't request a trade. People seem to think that saying a player requested a trade is a slight on the player, but there isn't anything inherently wrong about asking for a trade. And Wentz at least seems to have gone about it the right way, keeping things behind closed doors.

Of course, we don't know what would have happened if Roseman told Wentz and his agent to kick rocks. Then maybe things would've escalated, but fortunately it never came to that.

Then came the trade itself, which according to Breer the team finally acknowledged was the best course of action, in no small part because of feedback they were getting during the coaching interview process.

Roseman, as highlighted above, didn't appear to enter the offseason with any plans on trading Wentz. And even after getting that call from Tollner, they weren't sure that moving on was in their best interest. They were already moving on from Pederson, whose relationship with Wentz had reportedly become an issue, so maybe he believed there was a chance they could be the team to fix the struggling QB, especially after they already had invested so much in him.

The timing here is certainly interesting. When did this call happen? Was it before they decided to fire Pederson? And if so, was this call from Tollner the final straw for Pederson, with the team hoping to stick with Wentz over their coach and that firing Pederson would help him fall into line? Or was this call completely independent, possibly coming after Pederson was fired?

All we know is that it was "shortly after the season" and that at that time, despite numerous reports already out suggesting Wentz wanted out, Roseman appeared to want to try to make it work. But he and Lurie soon learned they might not have any other choice if they wanted to give their new hire a chance at success..

First, by interviewing a slew of candidates, the Eagles’ brass got outside affirmation that they had two quarterbacks, both Wentz and Hurts, who NFL people thought they could potentially win with. Second, saddling a new coach with all that would come with an attempt to reestablish Wentz as the face of the franchise would be a tough ask.  [si.com]

Breer pointed to the good cop-medium cop-bad cop dynamic (with Pederson, Reich and DeFilippo) that helped Wentz be so successful early on, and the fact that Wentz in recent years has reportedly struggled accepting tough coaching. He also mentioned Wentz's issues in the locker room connecting with some players and his Type-A personality.

Those things are fine when your quarterback is backing it up with strong play, which Wentz clearly wasn't.

Perhaps for those same reasons, there was very limited interest in Wentz once Roseman started officially shopping Wentz, which according to Breer came after the Matthew Stafford-Jared Goff trade was completed. But it was only ever really the Colts that were interested — John DeFilippo reportedly put in a good word with the Chicago brass, but the team never actually put forth an official offer for Wentz.

And that left the Eagles GM in a tough spot, although it was one largely of his own making.

That left the Eagles and the Colts in something of a stalemate, where Indy had made clear how far it would go. The trust between the two sides—the Eagles obviously know Reich well, and Colts GM Chris Ballard and Roseman have a strong relationship—kept that stalemate from ever becoming contentious. Still, more than two weeks had passed since the Stafford trade, and plenty of back-and-forth had happened. That led Ballard to tell the Eagles early last week that he wasn’t willing to wait forever. His offer had an expiration date.

It still remains hard to believe that Roseman was able to get two picks, let alone one that will likely convert to a first-rounder.

Then again, it's even harder to believe that the Eagles are in this position in the first place...