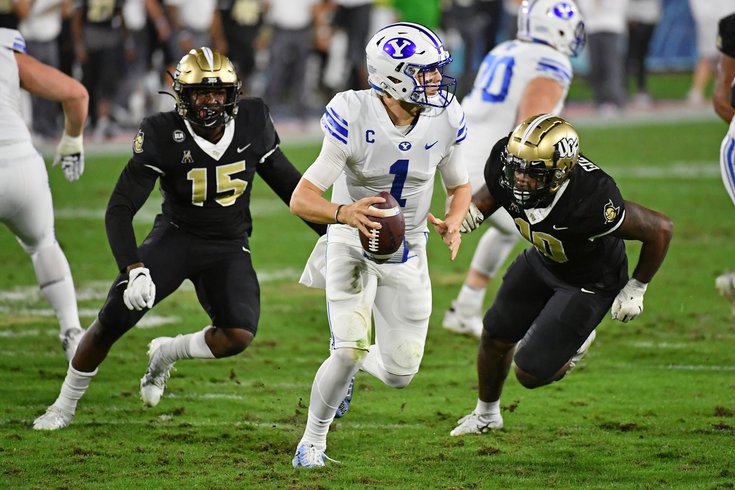 Jalen Hurts is the only Philadelphia Eagles quarterback currently under contract through the 2021 season. So, uh, spoiler: The Eagles are going to sign or draft at least one quarterback this offseason, and probably more.

The question isn't whether the Eagles will add quarterbacks. Rather, it's what kind of resources will they put into the position. But would they take one with the sixth overall pick, or even trade up for one? That will depend heavily on what the Eagles think they have in Hurts. In case you missed our review of Hurts' rookie season, you can find that here.

Because I was least familiar with Wilson, I started with him. The following is a library of Wilson's season, in chronological order, in case you're interested in taking your own look:

For this exercise, I watched his games against UTSA, Boise State, Coastal Carolina, and UCF.

Before the start of the 2020 season, nobody was thinking of Wilson as a first-round prospect. He was coming off a 2019 season in which BYU had a 4-5 record and Wilson had thrown 11 TDs vs. 9 INTs. In 2020, however, it all came together for Wilson, as he posted some pretty incredible statistics.

In 12 games, he completed 73.5 percent of his passes (second in the country), he averaged 11.0 yards per pass attempt (third in the country), and he threw 33 TD passes vs. 3 INTs, while adding another 10 TD runs in 12 games. He also only fumbled 3 times, and two of his interceptions weren't his fault. One was a Hail Mary, and on another, his WR tripped. So that's all pretty good, right?

His rise from afterthought to potential top 5 pick was reminiscent of Joe Burrow's rise the previous year. Burrow won a national championship while playing in the most difficult division in college football. Wilson's BYU team went 11-1, though they did so against a very weak schedule of opponents.

There's an argument to be made that there should be as much concern about Wilson's level of competition as there is for North Dakota State's Trey Lance.

Wilson is listed at 6'3, 210. If he is indeed 6'3, then great. If he is actually 6'2 or even 6'1, that's less ideal, but there are plenty of quarterbacks in recent years that have excelled in the NFL despite prototypical height. That would not be a big concern.

I do wonder about Wilson's hand size. In the four games I watched, the ball squirted out of his hand twice, without a defender affecting him. Once was a fumble, once was while he throwing. Just something to look for whenever official measurements are available, I suppose.

Also, while Wilson was able to make plays with his legs, I'm curious about his 40 time and his other athletic measurables. As noted above, BYU played that weak schedule, and as a result, receivers were often wide open. As an extension of that, did Wilson just look like a better runner than he actually is because of the level of competition?  Kevin Kolb looked like a reasonably mobile quarterback coming out of Houston 15 years ago, but he ran a 4.85 40, and his legs were not a weapon in the pros. So I'd like to see the stopwatch match the eye test.

Wilson's 73.5 percent completion percentage lies a tiny bit, as BYU receivers were often wide open. However, Wilson is indeed a very accurate thrower. His ball placement is mostly on point on short, intermediate, and deep throws. He also knows when to throw with touch, and when to laser it, and he's accurate when doing both, whether stationary in the pocket, or when he's on the run. Accuracy is his best trait, in my view.

Wilson's arm strength is obvious, and yet, he doesn't overuse it, as many quarterbacks gifted with a rocket arm will do. It's a tool for when he needs to put something extra on his throws. As a thrower, the accuracy and arm strength are two major boxes checked.

As noted above, I'd like to see the stopwatch match what he showed on the field this season. But as a runner, Wilson did at least look like his legs will be an asset at the next level. BYU sometimes called designed runs, often utilizing the option. He'll be a threat with his feet on RPOs in the NFL, at a minimum.

He can also run through defenders, but that could maybe be to his detriment in the NFL. In BYU's game against Coastal Carolina, for example, he ran over a safety in the open field, which looks great on TV and will get his teammates fired up, but was ultimately the same result as a slide. In that same game, on a 3rd and 30, he tried to hurdle a guy with like 25 yards still to go for a first down, and plenty of other defenders in the area.

It's good to know that he has that ability and competitive mentality in situations in which he absolutely needs an extra yard or two to get a first down or a touchdown, but his coaching staff is going to have to rein him in a bit on that regard, like the Eagles had to do with Carson Wentz.

Quick, tight release, and he can throw accurately from different arm angles.

Wilson is good at feeling the rush and making subtle moves in the pocket to buy extra time to throw. He is also not quick to abandon the pocket when his first or second read isn't there, and he'll continue to keep his eyes down the field.

If there's one concern, it's that he'll take the occasional bad sack. When there's pressure, which he didn't face a ton of in 2020, he'll often retreat backwards. That won't fly in the NFL.

RELATED: The case against the Eagles drafting a QB with the sixth overall pick | Eagles expected to bring in QB competition for Jalen Hurts

For example, on this play against UTSA, you can see his pocket awareness, accuracy, arm strength, and his ability to throw on the move, while also moving the defense with his eyes. I mean...

Lol. Plenty of other highlights here:

That's for the NFL scouts who get to know him to decide, but it's very clear that Wilson is a very competitive player. We noted his 3rd and 30 hurdle above, lol, but I also loved his comeback attempt against Coastal Carolina.

With 44 seconds left, down 5, and no timeouts, Wilson faced a 1st and 19 from his own 8 yard line, and BYU almost won. It's worth a quick watch:

Yes, though I imagine he won't be available.