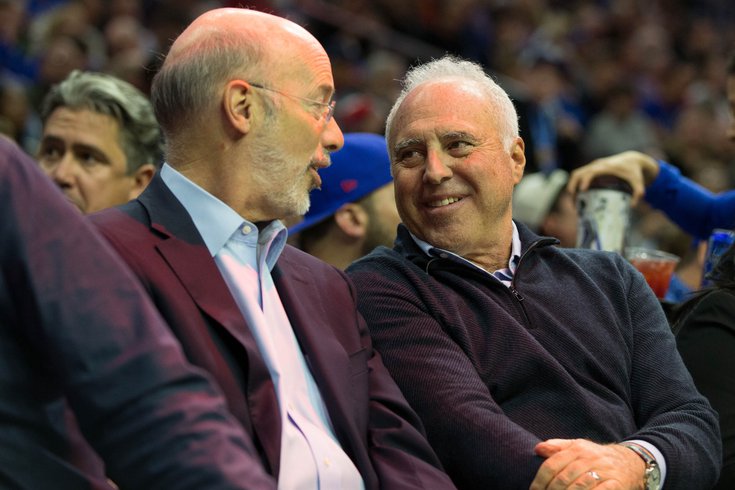 OK, maybe not a literal politician...

Back when Jeffrey Lurie fired Doug Pederson, the laugh-out-loud moment for many at the virtual press conference came when the Eagles owner was asked if he's gotten too involved in football decisions over recent years.

"I would say my involvement has been the same for about 25 years," Lurie deadpanned.

Like plenty of others, I wasn't about to drink that Kool-Aid after living through Lurie's meddling with Pederson's staff, always a weird stance on the surface especially post-Super Bowl LII after the ex-coach helped deliver the only Lombardi Trophy in Lurie's now-quarter century-plus run as the steward of Philadelphia's favorite obsession.

Turns out Lurie was telling the truth.

Former Trenton Times Eagles beat reporter Mark Eckel was around for Day 1 of the Lurie era and surprised me with his take when responding to a story of mine discussing the uptick in Lurie’s involvement:  "This isn't anything new. Lurie has been this way since he bought the team. Go ask Ray Rhodes."

From there I mentioned that exchange to Barrett Brooks on PhillyVoice's "The Middle" and we were off to the races with the former Birds offensive lineman remembering when Rhodes wasn't aware tight end Jimmie Johnson was released for a very good reason, the head coach wasn't involved.

Rhodes was, of course, Lurie's first hire back in 1995 and we now have quite the sample size of Rhodes, Andy Reid, Chip Kelly, Pat Shurmur (on an interim basis), Pederson, and now rookie head coach Nick Sirianni.

Interestingly, Lurie's tenure owning the Eagles virtually mirrors my career covering the NFL. But most of that was outside Philadelphia, so I asked Eckel about Reid, not the unknown 1999 version but the powerhouse once "Big Red" established himself.

From the outside, looking in, Lurie certainly didn't look like he was micromanaging Reid in the same way he stuck his nose into Pederson's business. Same with Chip Kelly, who came to the Eagles with the power of being the flavor of the month, and the guy set to revolutionize the game at that particular snapshot in time.

Eckel, though, indicated nothing has ever really changed: "Absolutely [Lurie meddled]. Andy, after a while, just didn't listen. Or knew how to pacify him."

Circle back like Jen Psaki to Lurie's comments after firing Pederson.

"I think that what I tend to do is to ask a lot of questions and to understand where we're coming from strategically and performance-wise, and it's stood us in a good way because it's allowed me to transition when we've needed to, make coaching decisions that have worked out, at least often in the short run or long run, and allowed us to be able to have a finger on the pulse of what could take place," the owner said.

Armed with this information, I went to a former long-time assistant coach for the Eagles, who was in Philadelphia for an extensive period of time, and asked what the score was with Lurie.

"He's very involved," the coach said. "I've never seen him order anyone around when it comes to a football decision, but he's good at steering things the way he wants."

Turns out Lurie has always been much more involved than the average NFL owner, perhaps a stealthier Jerry Jones — minus the personality and maybe the gin and tonic — right down to the jealously over the praise a Super Bowl-winning coach receives.

The hope has to be Sirianni is the Barry Switzer to Pederson's Jimmy Johnson when it comes to a championship. The difference there is that Lurie didn't act when the roster was still strong, however.

You get the feeling that many of the football people around the NovaCare Complex wish Lurie found a passion project when it comes to movie making, anything to take him away from acting like a "football guy."

Steering his personnel and coaching staff to build around Jalen Hurts is not by definition a bad thing. Hurts is a legitimate prospect with a chance to develop into a long-term starter, something only buoyed by the second-year quarterback's work ethic and natural leadership skills.

It's unlikely but had Lurie left his football people to their own devices and allowed them to make their own conclusions they very well may have come to the same point.

“Jalen showed some good things last year,” NFL Network lead draft analyst and former Eagles scout Daniel Jeremiah said earlier this week when asked if he would move forward with Hurts. “I think you're hopeful and excited about what you can see from him going forward.”

Jeremiah, though, noted that 2021 prospects like Ohio State’s Justin Fields and North Dakota State’s Trey Lance have higher ceilings as players when measured against Hurts.

“I would say the highest ceiling would be Justin Fields just because of his speed and athleticism — Trey Lance is a great runner and I think Trey Lance is probably going to run in the high 4.5s, which is incredible; and Jalen Hurts is a really good runner,” Jeremiah noted. “But Justin Fields can be a home run hitter as a runner. Just his speed makes him a little different there.

“... Jalen Hurts I had as my 50th player and I thought he had a chance to be a quality starting quarterback at the NFL level, but these two kids to me have a much higher ceiling. That would be — if you're looking at ceiling, that would be probably the order that I would go. I think Trey Lance and Justin Fields is kind of a toss-up.”

Everything comes down to evaluation, however. Andy Weidl, like Jeremiah, might believe Florida tight end Kyle Pitts is the best player in the process and want to pull that trigger and have Hurts and Pitts rather than Fields and Minnesota WR Rashod Bateman at No. 37.

There are a lot of moving parts, but QB is the most important one of all.

“I think it really depends on how you evaluate these quarterbacks,” said Jeremiah. “To me, if you have a significant gap between Jalen and what your options there at pick No. 6, might not be popular to go back to that well after all the quarterback drama, you can make a case, well, let's just have a year of peace, let's take the best available player.

“I would separate it by saying if Kyle Pitts is there, turn in the card. I don't know if it's 10 or 15 minutes, however long you get between picks this year, but don't spend all of it. Just send that card in and be done with it. Outside of that, I think it really comes down to your evaluation. If you have a big gap between one of these quarterbacks and Jalen, I think you have to take the quarterback. That's just my opinion.”

The larger and more daunting problem for the Eagles is what if Lurie is correct and Hurts turns out to be the guy?

On the surface that's great, but remember a broken clock is still right twice a day. What it's not going to do is tell you the time consistently.

Lurie doesn't have the ability or expertise to stack together good football decisions. It might sound counterintuitive, but Hurts turning into a star would only embolden Lurie even further moving forward. He's already spiked the desires of a successful head coach and ordered his personnel department to ignore certain players.

You might believe Sirianni's job is all about scheming and X's and O's but that's only a small part of it. The Eagles need a shadow government inside One NovaCare Way, a Deep State with a leader that either builds up enough cachet to ignore and/or pacify the guy signing the checks.

Make sure you follow the JAKIB Media Partners YouTube page for your daily “FootballFix,” the Eagles podcast that became an institution in South Jersey as the No. 1 local drive time segment in the market. Now you can listen anywhere at any time on YouTube, Apple Podcasts and Spotify.

You can also listen to John during the week on Tuesday and Thursday on @SportsMapRadio and right here on PhillyVoice.com on “The Middle” with Eytan Shander, Harry Mayes, and Barrett Brooks, and on dozens of radio station nationwide courtesy of @JAKIBMedia.