Eytan Shander: Jeffrey Lurie has been meddling with Eagles since the Ray Rhodes era

And it's worth wondering where the Eagles owner is getting his information from... 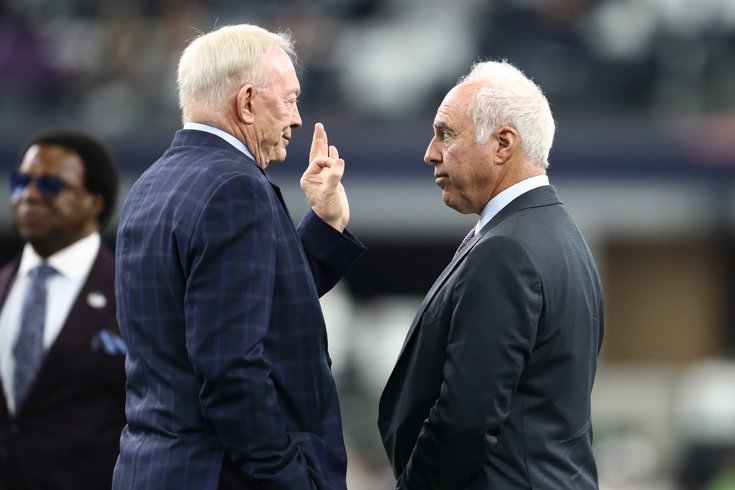 It’s happening now, and yes, it will happen again.

We have countless amounts of think pieces on why Howie Roseman should be fired or why Jeffrey Lurie is a terrible owner. We’ve evolved the conversation into asking over and over why Lurie continues to protect Roseman, I even offered up my thoughts on it last week.

Then this week, we got another example of the owner meddling when ESPN's Chris Mortensen reported that Lurie already told new head coach Nick Sirianni who the QB is going to be — Jalen Hurts. It’s a decision on the surface I agree with, but it comes at the expense of the worst possible means. Sirianni said there will be competition at every position and was immediately undermined by the owner. Just like the last coach.

In all of the reacting, and yelling, and screaming, and tweeting at both the GM and team owner of the Philadelphia Eagles, has anyone actually stopped to ask where Lurie is getting his insight from? Especially on moves like J.J. Arcega-Whiteside?

The short answer is no, until now.

Lurie getting the time right twice a day should not impress anyone, but how he learned to read a clock should frighten the hell out of Eagles fans everywhere.

Tuesday on The Middle, Super Bowl champion Barrett Brooks, who played in the NFL for over a decade, told a story from his time with the Eagles and shed light on a common belief in the locker room — that Lurie was making football decisions based on info from a questionable source. That boiled over one day when then-coach Ray Rhodes walked into practice to find out that one of his players had been cut, by the owner, without ever informing the coach.

NFL columnist John McMullen was also on the show and confirmed some things based on what his colleague, longtime Eagles writer Mark Eckel, recently told him about Lurie's history of meddling with his team.

Brooks played a season here for Rhodes and experienced first-hand the reach of Lurie’s meddling. Brooks also told the show that everyone in the locker room genuinely believed Lurie was not only listening to WIP but also taking his cues from the station! Whether or not that's true, it's a pretty bad sign when the players themselves start to believe that.

If you didn't make it all the way through the clip, here's the story from Barrett, which starts around the 5:43 mark:

BARRETT BROOKS: "You know what? You're absolutely right! I can remember when I was playing with the Eagles, and it was Ray Rhodes who was the head coach. We were walking down the steps at seven o'clock in the morning going to practice — I was going to get in the steam room after another bout with pineapple vodka — but I'm walking down the steps with Ray Rhodes. As I'm walking down those steps, one of our tight ends, Jimmy Johnson, was walking up the steps. As he's walking up the steps, I'm like, 'Jimmy, what's up, man?' and he's cussing and then he turns to Ray and Ray's like, 'What's going on Jimmy?' He said, 'What do you mean what's going on with me? You just cut me.' And Ray was like, 'Wait, wait, wait. What do you mean I just cut you?'[And Johnson said,] 'Yeah, you just cut me.'"

JASON MYRTETUS: "What? Lurie did it?"

There's so much to unpack here. McMullen backing it up with assist from Eckel. Brooks coming back to how the players really believed this owner was playing fantasy football after hearing the latest Angelo Cataldi rant. Jason doing his own version of a Cataldi rant. It has everything.

But most of all, it leaves you scratching your head and wondering how we didn't see this all along.

Was Chip Kelly really in the dark about LeSean McCoy being traded? What about when DeSean was released? Was that just Lurie leaving Chip out to dry with no advanced notice, like he’s done with other coaches? Did Joe Banner take the hit – like Howie Roseman continues to do – for Lurie after the Brian Dawkins debacle? There are countless moves that may now need to be re-litigated.

I also don’t even know who Lurie would be listening to on a given show – which makes it even scarier. I honestly don’t know what’s worse: cutting a player because of something Howard Eskin yelled at Mike Missanelli, or because “Jim from Souderton” went on a three-minute rant and threatened to sell his half-season ticket package.

Here’s the best part about it: this is the most believable thing I’ve seen all season. Think about it, it was believable back when Brooks played here. It’s still believable right through this week with the Mortensen report. Remember when that random/weird report came out before the Seahawks game this season? The one about Lurie possibly directing Doug Pederson to play Hurts more if Wentz's struggles continued? That's yet another example of Lurie's meddling from this season alone.

We already have enough reports to draw a reasonable conclusion that Lurie has his hands all over his team. Now we add a believable element backed by a former player and current columnist to an already chaotic situation.

Also, it’s sports talk radio! Even I know not to take that stuff seriously.

RELATED: Report: Lurie tells Eagles to build around Hurts, not a QB competition

I spoke with the Action Network’s Michael Calabrese - @eastbreeze – about how he approaches the tournament. It’s incredibly insightful information on how a sharp mind views one of the biggest betting events each year. I speak with Michael weekly on iHeart Radio’s Fox Sports The Gambler and am amazed at how deep he will dive to find value. I’m now a huge fan of Abilene-Christian as a result.

Is Jeff Lurie too involved? Yes, yes, he is. Or… is he? We discuss.

We recommend you bookmark phillyvoice.com/themiddle and catch us Monday-Friday from 11 a.m to 1 p.m.