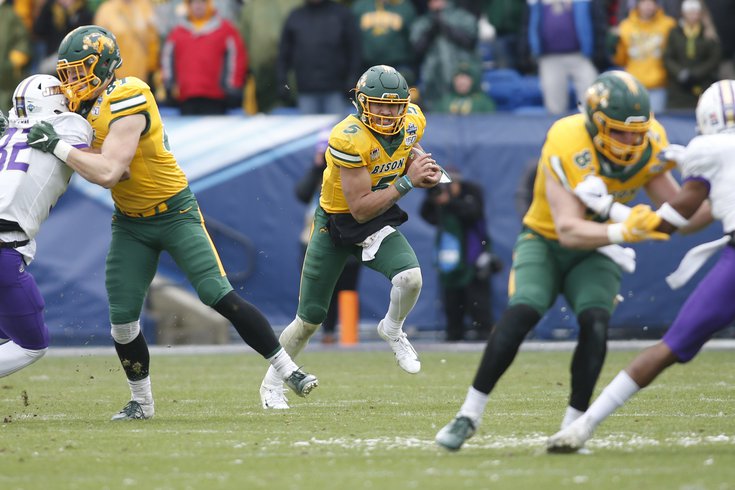 As a reminder, after the Carson Wentz trade, the Philadelphia Eagles are projected to have nine draft picks this year, with two in the third round, two in the fifth round, and two in the sixth round, depending on how compensatory pick projections go. Here were versions 1.0 and 2.0, in case you missed those.

Let's say the first five picks of the 2021 NFL Draft unfold like so:

The top three quarterbacks (in my opinion) are gone, as are the two positional players – Chase and Sewell –  who probably have the best chances of being elite in the NFL.

The Eagles would then have to decide between a couple of Bama WRs in DeVonta Smith and Jaylen Waddle, one of the top cornerbacks, or the final quarterback worthy of taking somewhere in the top 10. (To note, taking a tight end here would be an awful use of resources, even if Kyle Pitts is a stud.)

Another North Dakota State quarterback could very well be in play for the Eagles with the sixth overall pick, which would no doubt be a controversial selection. In addition to coming from the same school as Wentz (I don't care about that even a little bit, personally, but plenty will), Lance certainly has some concerning things working against him, as we laid out when we took a deeper look at him a couple weeks ago:

On the plus side, he has some really appealing traits as well. He has all the physical attributes you could want, from size, to speed, to arm strength. He also seems to be a good decision maker (one career INT), he's tough, he doesn't rattle easily, and he makes more than his share of off-schedule plays. Oh, and he's kinda fun to watch.

He also legally won't even be able to buy a beer when he gets drafted this April, as he is still only 20 years old, and has plenty of time to grow. By comparison, Wentz was 23 when the Eagles drafted him.

Whether the Eagles would draft Lance would depend on how patient they'd be willing to be with him. If you want immediate results from a positional player, you'll get that from guys like Sewell, Chase, or Smith, as noted above.

However, if you really value the quarterback position (as the Eagles do), and you're not sure of what you have in Jalen Hurts, Lance is a more physically gifted player with a higher ceiling. He's just going to need some time to iron out the kinks, and become a more accurate passer.

You draft Lance if you think he can be the next Josh Allen, who was another physically gifted quarterback with accuracy issues coming out of a small school. Allen had a spectacular 2020 season, but he went through bumpy times before he got there.

Whether the city of Philadelphia will have the patience to allow a guy like Lance to succeed also factors in. If you're the Eagles, you better feel good about his ability to shrug off criticisms and stay off of social media as he grows as a player.

The Eagles are not going to be good in 2021, and they probably won't be good in 2022 either, so they feel like a reasonable landing spot for a quarterback who may need a few years before he can really begin to shine. But once he gets his NFL sea legs, there's a reasonable chance that Lance could be a star, and that's hard to pass up at the most important position in sports.

RELATED: The case against drafting a QB with the sixth pick

Before the start of the 2020 season, Bateman was a COVID opt out, who then opted back in and played five games for the Gophers. He was at one point not only thought of as a first-round pick, but a likely Eagles target in the first round, back when, you know, we didn't know the Eagles would go 4-11-1.

Bateman's 2020 season was much like his first two seasons at Minnesota, in that he averaged just under 100 receiving yards per game.

Somehow, Bateman is no longer consistently being talked about as a first-round pick, and I'm not quite sure why. While not a burner, he's a good route runner who creates separation, he makes difficult body control catches, and he's a competitive runner after the catch.

The Eagles spent three draft picks on burners in the 2020 draft. Bateman is a guy with a little more size who can win in a variety of ways from the outside and the slot, and would complement the speed guys well.

Campbell is something of a wildcard in this cornerback class. He has coveted length and rare athleticism, and is likely going to be a player whose Pro Day numbers stand out. However, the results on the field haven't always matched his impressive size and athletic measurables, and there are concerns about his technique and consistency.

In three years after enrolling at Georgia as a five-star recruit, Campbell only had 1 INT and 10 PBUs in 31 career games. His first career college INT came in his 29th game, though it should be noted that Campbell has played against his share of outstanding college receivers. Some highlights:

Campbell would benefit from landing with a team with a good defensive backs coach. Under the previous staff, I would not recommend that the Eagles draft him. However, new defensive coordinator Jonathan Gannon has gotten a lot out of his defensive backs in the past, so the Eagles are arguably better equipped now to maximize a player like Campbell's potential.

Some believed at varying points that Campbell could be a first-round pick. No way. You can't take a guy Round 1 who has one career pick and 10 pass breakups, especially when opposing offenses weren't actively avoiding throwing at him. But he is an intriguing high ceiling type who could make sense for the Eagles on Day 2.

MORE: Eagles podcast: Our top 6 'big boards' | WTS: Will Eagles actually blow it up and rebuild, or just make some tweaks?

Gainwell opted out of the 2020 season, after he lost four family members to COVID.

If Nick Sirianni intends on using his running backs heavily in the passing game, Gainwell would make a lot of sense, even if the Eagles already have a pair of quality pass catchers in Miles Sanders (or at least Miles Sanders, circa 2019) and Boston Scott.

Williams has been overshadowed at times by Syracuse defensive backfield teammates Andre Cisco and Ifeatu Melifonwu, but he is arguably just as intriguing of an NFL prospect as those guys. Williams has experience playing outside corner, nickel corner, and safety at Syracuse, and he has very appealing size and athletic measurables. For example, Williams made Bruce Feldman's "freaks" list this year, with the following explanation:

He vertical jumped 40 inches and has been clocked at a laser-timed 4.34 in the 40. Williams, up about 20 pounds since last year, also has benched pressed 225 pounds 17 times.

Williams got off to a nice start in 2020 while playing safety, making 23 tackles, 1 INT (a 90-yard pick 6), and 4 pass breakups in 5 games, before shutting it down for the season to prepare for the NFL draft. A highlight reel:

Teams will have to decide where they want him to play. If they try him at corner, it could take longer for Williams to develop, but could potentially be a bigger payoff. My preference would be at safety in a centerfielder type of role, where Williams is capable of covering sideline-to-sideline, and could be a replacement for Rodney McLeod.

As we've noted all year, the 2021 NFL Draft will be loaded with slot receiver talent. Smith isn't quite as explosive as some of the others, but he has an impressive highlight reel of fantastic catches.

Smith is tough, fearless, and can make catches in traffic. In that sense, he is sort of a souped up version of Greg Ward with more speed.

Smith shouldn't be available in Round 5 in a normal draft. In a draft loaded with slot receivers, someone is going to fall into this area of the draft, and possibly be a steal.

Jackson is a short, thick pass rusher with 18 sacks his last two seasons (23 games) at Coastal Carolina. He is known as a power rusher with hand fighting ability, and (Andy Reid alert!) a high motor, which are sort of a necessary traits given his lack of height.

Coastal Car EDGE Tarron Jackson holds his own vs. larger OT, often using his hands to disengage to make stops in the run game. Here he earns a sack hustling to prevent the QB from escaping the pocket. #SnapScout21 pic.twitter.com/evQcvWnPp3

Jackson reminds me a little of Brandon Graham, in terms of stature, energy, style of play, and versatility to rush from the inside on occasion. He'd be a logical fit to back up Graham at LDE, where he can learn behind the 11-year vet.

Kaindoh is a length-athleticism freak and former five-star recruit with upside who has shown more potential than actual production. In four seasons at FSU, Kaindoh had just 59 tackles, 8 sacks, and 1 FF, partly because of injuries and several scheme changes. Still, that's a decent season for a top prospect. Over four seasons and 31 games? 😬

The production that Kaindoh does have has come because of his physical traits, as opposed to a repertoire of pass rush moves, or savvy. His game will have to be refined at the next level. A look:

It should be noted that Kaindoh was rewarded this past season for his hard work, and is generally thought to be a high character player, so it's not as if there are red flags in that regard.

The Eagles should probably stop taking high-upside developmental players on Day 2 who won't contribute immediately, but if there's a position where that approach would maybe make some sense, it would be at DE, on Day 3.

McCarthy is sort of a deep sleeper in the 2021 draft, but he's a potential fit for the Eagles' defense under Jonathan Gannon, a disciple of Mike Zimmer. At FAU, McCarthy was an undersized DE during his first three seasons before moving to LB for his senior year. In 2020, he had 9 sacks from his LB position, so he should be an effective blitzer, which would be a plus trait for LBs in a Zimmer-influenced scheme.

He'd be a project, but one with some pass rushing upside. I promise I did not make this person up.

MORE: Three free agents who make sense for the Eagles, 3.0 | Which Eagles players are even worth keeping at this point?