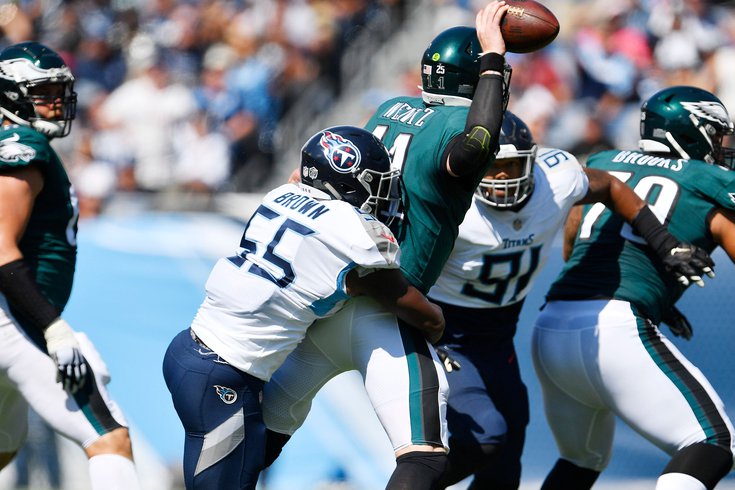 Here are three free agents that I believe make sense for the Eagles in free agency this offseason. Yes, I'm aware they're underwhelming.

Each of the last three Eagles new head coaching hires have brought quarterbacks along with them to help install their offenses.

• Andy Reid brought Doug Pederson with him to Philly from Green Bay.

• Chip Kelly brought Dennis Dixon in from the Ravens. (Dixon played for Kelly at Oregon.)

• Pederson brought Chase Daniel with him to Philly from Kansas City.

Daniel signed a three-year deal worth $21 million, but he only lasted on the team for one season. He counted for $5 million on the 2016 salary cap, and $7 million in dead money on the 2017 cap after the team released him. For that $12 million, the Eagles got one pass attempt out of Daniel, though in fairness, he did complete it, giving him a share of the Eagles' all-time completion percentage leaders. 😉

After Daniel's release, Howie Roseman put out the following statement:

Your takeaway here should be that the Eagles clearly value the veteran mentor quarterback who already knows the offense, and Brissett would make sense as a guy who has already run an offense coordinated by Nick Sirianni.

Where Brissett would not make sense is that like Daniel in 2016, Brissett should have a decent market, and won't come cheap. Since the Eagles are highly unlikely to be contenders in 2021, signing a veteran backup to a costly contract just to mentor Jalen Hurts (and maybe also a rookie draft pick) feels like money spent unwisely. Why use finite cap space for a player to do the coaching staff's job?

Brown is good at both. In the four years since the Titans selected him in the fifth round of the 2017 draft, he has 9.5 sacks, 18 QB hits, 26 pass breakups, and 3 INTs. He has been a productive player both in coverage and as a blitzer, and could be a nice fit in what some perceive Gannon's defense will be. A look:

One obstacle could be cost. The Athletic's Sheil Kapadia and NFL.com's Gregg Rosenthal both have Brown as the third-best off-ball linebacker available in free agency. However, if the Eagles believe the fit is right, they could structure a deal in which Brown's 2021 cap number is low, but is higher on the back end.

There's also the possibility that the NFL won't like Brown as much as Sheil, Gregg, or I do, because of his diminutive size, at 6'0, 226, and his unimpressive "on paper" athletic measurables. So maybe he won't be as expensive as anticipated? It's also worth noting that the Eagles have brought in their share of similarly-sized linebackers in recent years, both in free agency and the draft.

The addition of Brown would give the Eagles a linebacking trio of of Brown, Alex Singleton, and T.J. Edwards, with the possibility of second-year players Davion Taylor and Shaun Bradley showing more in 2021 than they did as rookies. Don't want to spend premium resources on a linebacker in the draft? This would be a reasonable way to continue that roster-building strategy that many Eagles fans have found frustrating.

The Lions drafted Agnew as a cornerback, and in 2020 converted him into a wide receiver. But who cares about all of that? It's been a while since the Eagles have had a good returner, and Agnew can return kicks and punts at a Pro Bowl level. Here are Agnew's return average rankings since he's been in the NFL. Rank based on a minimum of 15 returns:

Agnew has 4.34 speed, and 5 career return TDs (4 PR TDs, and 1 KR TD against the Eagles, if you'll recall). Here he is returning a punt to the house against the Giants:

On Eagles kickoff returns in 2020, it was as if someone stretched invisible fishing wire from sideline to sideline at the 20 yard line, and Boston Scott would trip over it on every return.

On punt returns, while Jalen Reagor did have a TD return, it was an adventure for him fielding punts. Plus, as the roster stands right now, he's probably the team's No. 1 WR, so there should be debate whether or not to use him at all on special teams. Otherwise, Greg Ward was (a) wholly unthreatening when he fielded punts, and (b) he let too many punts hit the ground.

One way the Eagles can help out their offense this season is to give them better starting field position, and maybe even a big play here or there. Agnew would help both on kick returns and punt returns.