Mailbag: Thoughts on the Eagles' and Ravens' proposed rule changes 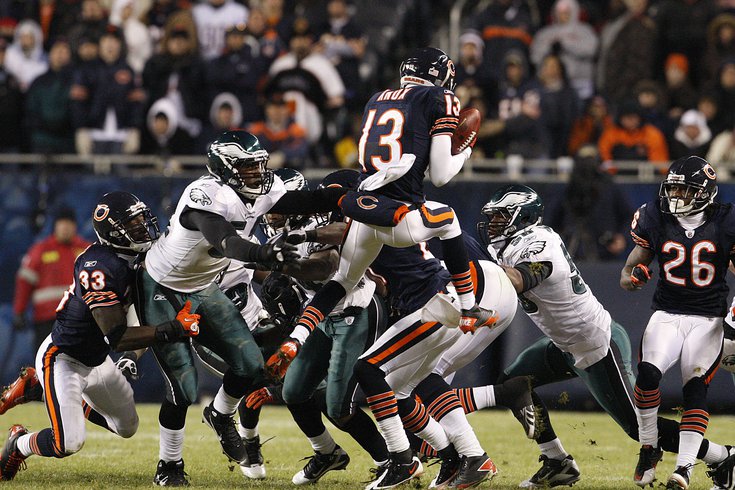 Question from Kephas: What's your take on the Eagles' proposed "4th & 15" onside kick alternative? Seems like a reasonable option to try - more so than the "Choose the yard line and offense/defense" option Baltimore is supposedly suggesting (which doesn't seem to solve anything, in my opinion).

For those of you who don’t know what Kephas is talking about, last year the Eagles proposed to provide an alternative to the onside kick that would allow a team who is trailing in the game an opportunity to maintain possession of the ball after scoring. They would face a 4th and 15 from the “kicking team’s” 25-yard line. It actually came closer to passing than I would have thought, but ultimately did not pass. The Eagles proposed it once again this offseason.

The proposal not only makes sense, but just as importantly – and I think we forget this point sometimes – it’s fun! Back in the day, onside kicks used to be recovered with a much higher frequency than they are in today's game, as a result of some player safety rule changes. Changing to the 4th and 15 system would get it back to a success rate closer to onside kicks of yesteryear. That's explained in better detail in the Eagles’ more in-depth proposal from a year ago, here.

From a viewer enjoyment perspective, it feels like a no-brainer to me. When the receiving team knows an onside kick is coming, there's almost nothing fun about it. Even on the now very unlikely chance the kicking team recovers the onside kick, it's almost always just a pile-up, while the viewer waits for the officials to signal who has the ball. I mean, what's fun about that? A 4th and 15 scenario is so much more dramatic, and puts the game in the hands of players that fans actually care about, as opposed to special teamers.

But I also like to think of it in terms of the 4th and 15 thing having always existed, and some team tried to change it to an onside kick. Like, can you imagine the sales pitch for that?

“So we were thinking, perhaps instead of allowing the scoring team to try to keep possession of the ball with a 4th and 15 play from their own 25, we should replace that with something we’ll call an ‘onside kick.’ The team that just scored has to kick the ball, making sure it hits the ground, and they can recover it as long as it goes at least 10 yards. Surely the fans will enjoy these ‘onside kicks’ more than one of the most exciting plays in our great sport.”

I think that those opposed to the 4th and 15 rule have brains that are just conditioned to immediately skew against change of any sort. Just do it.

As for the Ravens’ proposal, as explained by Mike Florio of ProFootballTalk:

It works like this: One team picks the spot of the ball to start overtime, and the other team chooses whether to play offense or defense.

If the one team picks, for example, the offense’s own 20 yard line, the opponent would then choose whether to play offense from their own 20 or to play defense, with the other team having the ball on its own 20. This would minimize greatly the impact of the coin toss; under this proposal, the coin toss would be used only to give the team that wins the toss the right to pick the spot of the ball (along with the end zone to be defended) or to choose offense or defense.

Under one of the two proposals to be made by the Ravens, overtime would proceed in sudden-death fashion, with the first score by either team ending the game and up to 10 minutes of extra time.

To answer your question, what the “spot and choose” approach solves, as Florio put it, “replaces chance with strategy.” Another component to game strategy to over-analyze and second guess after games, and then make fun of the coaches that mess it up? Yes please!

I can’t imagine there’s any way that will pass this year, though.

Question from Cesar: In what scenario do you see Justin Fields falling to the Eagles at 6? And why suggest that the Eagles shouldn't pass on him? Like what about him is so much better than Hurts besides a stronger arm? Stronger arm doesn't always mean better production. I don't trust Ohio State QBs.

Really getting your money’s worth with multiple questions on your turn. This is a strategy used by Zach Berman of The Athletic, and I respect it. Anyway, I’ll answer those one at a time.

"In what scenario do I see Fields falling to the Eagles at 6?" I don’t think it’s likely. My bet is that three quarterbacks go in the first five picks. If there are no trades, then I think Trevor Lawrence goes No. 1 to the Jaguars, Zach Wilson goes No. 2 to the Jets, and I think Fields would make a lot of sense for the Falcons at No. 4. That said, I do think there will be a trade or two, thus adding to the probability that three quarterbacks will go in the top five picks. Fields will fall to 6 if the Falcons don’t like him enough to take him over some of the other players at No. 4, or if other teams don’t want to spend the lofty price it will take to trade up.

"Why suggest that the Eagles shouldn't pass on him?" Because I think he’s a very talented player at the most important position in sports.

"What about him is so much better than Hurts besides a stronger arm?" First, I do agree that Fields has a stronger arm, so that is one differentiator. I also agree that having a cannon for an arm (vs. just having an arm in which you can make all the necessary throws, but won’t have a highlight reel of near-impossible ones) is more of a bonus than it is a prerequisite to having success in the NFL. Personally, I don’t think Hurts’ arm is bad. It’s just not a plus trait compared to other quarterbacks around the league. But that’s not the biggest differentiator between Fields and Hurts. In my view, Fields is much more accurate passer, which is a big deal.

"I don't trust Ohio State QBs." That’s fair, to an extent. I do think it was easy at times for Fields to have success in OSU’s offense, playing behind an excellent offensive line, with very good skill position players. When it’s “too easy,” the transition to the NFL can be difficult for some guys. So I get that. However, I don’t subscribe to the idea that “(Fill in the school) hasn’t produced good players at (fill in the position), and therefore they never will.” I’m no scout, but I think you have to look at each player individually, determine which traits will translate to the next level, which ones won’t, and how much the player benefited (or was held back by) scheme, level of competition, personality/mentality, etc., and then trust your evaluation.

Question from GoBirds: Help solve this debate with my friends. If the mostly depleted end of season Eagles team were to play against last year's Bama championship team, what is the spread?

Eagles -40. They would absolutely obliterate any college team.

Question from Brian: It seems to me that Jeffrey Lurie has the reputation of not being a meddling owner. I’m having doubts about that now. What do you think?

I think he was always more involved than most of us (self included) realized. Now, that reputation should be dead.

Question from Lurking Lurie: If you were a tree, what would you want your wood turned into when you die? A table, baseball bat, etc.

Question from Kephas: Seeing as now both Pederson's & Wentz's homes are both on the market, which one are you taking?

First, a look at each house:

They're both really nice houses, obviously, but Carson lived out in the sticks, while Doug lived in Moorestown. Carson has more land, but there's far more to do where Doug lived, plus other benefits like better schools, etc. No offense to the country folks, but I'll take Moorestown all day over Woodstown. Location is the main reason Doug's home is listed for a million dollars more than Carson's.