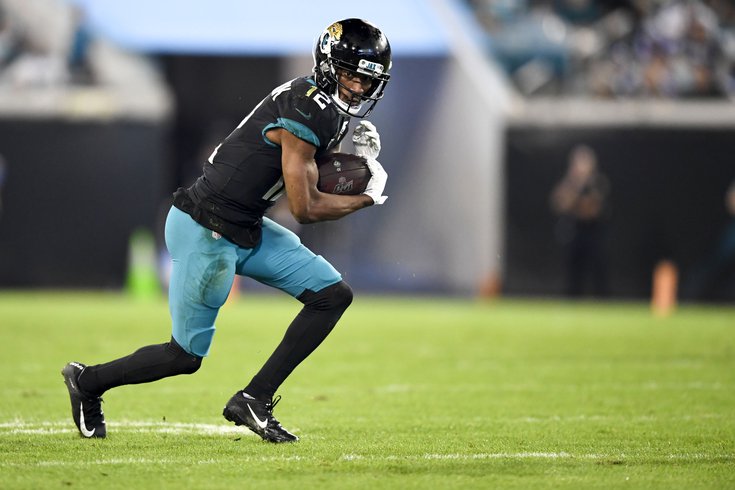 The NFL Draft is rapidly approaching — it's just over two weeks away at this point — and with the Eagles holding double-digit picks this year, much of the attention surrounding the team has rightfully been focused on what Howie Roseman (and apparently owner Jeffrey Lurie) plan on doing with those 11 picks.

Even after the trade back from sixth to 12th, the Eagles still appear to be in prime position to take a wide receiver with one of their first two picks, whether that's someone like Alabama's Jaylen Waddle falling to them in the first round or someone like LSU's Terrace Marshall Jr. early in the second. And beyond that, they could probably use one of their other 10 picks to take another receiver, even after they took a trio of wideouts a year earlier in 2020.

But that may still not be enough for the Birds, who could certainly benefit from adding a veteran in free agency. Currently, their depth chart at the position looks like this:

Notice anything missing? Like, say, someone over 25 years of age? Right now, after the team got rid of both DeSean Jackson and Alshon Jeffery, each of the seven wideouts on the roster is 25 or younger. Their projected starting quarterback is still just 22 years old. And if the team trades Zach Ertz, their starting tight end will be just 26. Their starting running back? 23.

Being young is a great thing for a team entering a multi-year rebuild, and they seem poised to add several more young skill players on offense in the draft. But there should always be a veteran in the room, a guy the younger guys can look up to and mold their game after. Someone to show them how to be a pro in the NFL. And while several of these guys have already learned some of those important lessons after being thrust into action last season (or even earlier) due to injuries, it would certainly help the offense to have some sort of veteran wideout to help with all these young guys, especially with a new (and also very young) coaching staff.

Right now, the only real place to add a veteran wideout is on the free agent market, which wasn't great at the position to begin with this year and has since dried up almost completely. That being said, there still could be some great value if Philly should they decide to bring in an older player to serve as a locker room leader among all these young players.

On Tuesday, we took a look at some remaining cornerback options for the Eagles, as Jimmy Kempski identified that as the Birds' biggest remaining need heading into this month's draft. No. 2? That's wide receiver. And while we expect the team to address the position in the draft, we figured now was as good a time as any to take a look at a few of the admittedly less-than-stellar options remaining on the open market.

These are hardly all the free agent wideouts still available, so if there's a player you've been tracking and you don't see him here, that doesn't mean he isn't a fit. We just stuck with five, which meant some guys Larry Fitzgerald, Golden Tate or Antonio Brown — all of whom have some knock against them, from age to their past resumes — didn't make the cut.

The former Jaguars wideout missed most of last season with a torn ACL, which means the Eagles could get him on the cheap. And with that injury coming early in the 2020 season, there's a good chance he could be ready by the start or season (or close to it). Prior to the injury, the former fourth-round pick had a few good seasons as the Jags slot receiver, catching 66 passes on 101 targets in both 2018 and 2019 for a total of 132 receptions for 1,377 yards and eight touchdowns over that two-year span. Those were his last two full seasons before the ACL injury, as he showed serious promise after a so-so rookie season.

If the Eagles could get Westbrook for relatively cheap, they should jump at the opportunity, even if they already appear to like their current slot receiver, Greg Ward. He's not necessarily the veteran presence we talked about in the intro — he'll still be 27 years old when the season starts, and really has just three years of NFL experience after appearing in just two games last season. But he'd be a definite upgrade at the position and is young enough that he could stick with the Birds throughout their rebuild and potentially beyond.

Lee is another former Jags wideout and is two years older than Westbrook. And, like his former teammate, Lee didn't spend much (read: any) time on the field last season after opting out for COVID reasons following a one-year deal with the Patriots. The Pats released Lee earlier this offseason, but he's yet to find a suitor. Could the Eagles be that team?

Lee started to break out for the Jags after his first two seasons with a big improvement in 2016 (63 receptions, 851 yards, three TDs) followed up by another solid year in 2017 (56 receptions, 702 yards, 3 TD). He was rewarded with a big contract extension the following offseason and then suffered a massive knee injury in the 2018 preseason that caused him to miss the entire year. The following season, after getting off to a slow start that included just three receptions for 18 yards over six games, Lee was placed on IR with a shoulder injury. He then opted out of the 2020 season, so there are certainly some questions about what Lee has in the tank. But if it's anything close to what he showed in 2016-17, the Eagles could certainly benefit from his services.

Speaking of players who opted out of the 2020 season, what about bringing back Marquise Goodwin?

The Eagles acquired him on a draft-day trade last spring but the veteran wideout opted out of the season, then this year the trade with the 49ers that brought him to Philly was essentially undone, giving the Eagles back the pick they traded for him and ultimately putting Goodwin on the free agent market.

At the time the Eagles added him, it seemed like he would be deep-threat insurance for DeSean Jackson, which it turns out the Birds could've really used in 2020. At 30 and with seven years of NFL playing experience, Goodwin could be the kind of veteran the Eagles are looking for in the locker room. And on Sundays, he can likely still be a stretch-the-field option for the Birds, as he's averaged 16.6 yards per reception in his career. Unfortunately, his receptions and receiving yards fell year-over-year in each of his three seasons with the 49ers, so that's something to consider. But after a year away from the game, a refreshed Goodwin could be a nice addition for Philly.

Taylor, a former third-round pick by the Titans in 2017, is also looking for his second NFL contract after never really catching on in Cleveland. Following a solid sophomore season in 2018 in which he caught 37 passes for 466 yards and a touchdown, Taylor was traded to the Browns but bounced back and forth between their active roster and practice squad, appearing in just three games in 2019. He was waived prior to the 2020 season and ultimately re-signed to the practice squad a few days later. He was elevated to the active roster in October but was placed on IR with a neck injury in early December. He's not really an eye-popping option, but at this point in the offseason, who is?

The upside with Taylor would be that he is young and could provide some depth, especially if the Eagles grab multiple WRs in this month's draft. You don't need him to start — you should be giving as many reps as possible to your young home-grown players to see what they can offer — but he can certainly push some of those players during camp and at practice. Oh, and he can return kicks should the Eagles find themselves in need of a guy to put back there.

After coming into the league as an undrafted free agent in 2015, Byrd has bounced around from the Panthers, where he spent his first four seasons, to the Cardinals in 2019 and eventually the Patriots last season. And he's had a few big moments along the way that suggest he could contribute in Philly.

For starters, after two years bouncing between the practice squad and active roster in Carolina, Byrd finally started to catch on in 2017, but his season was cut short when he broke his arm and was placed on IR shortly after. It was early enough in the season, however, that he was able to return to action by Week 16 and actually set a Panthers record with a 103-yard kickoff return. Unfortunately, he was injured in the second half of that game and his season was over. The following year, another broken arm ended his career after eight games.

Those season numbers may not sound like much, but on a team that struggled offensively, his receptions were the third most on the team and his receiving yards were good for second most.