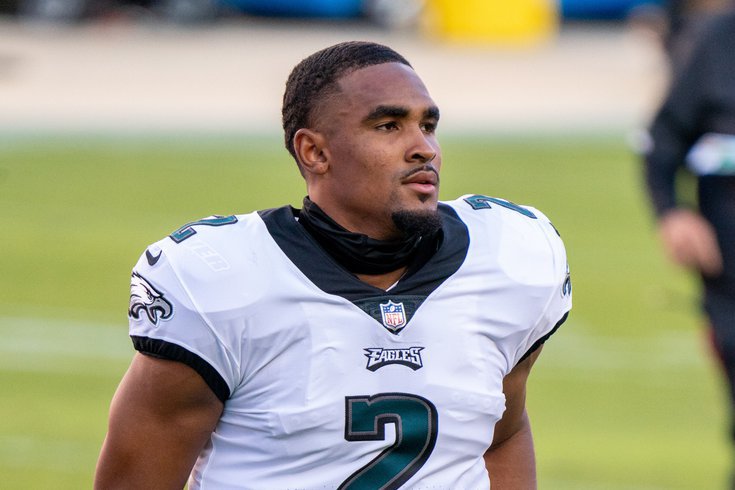 Philadelphia Eagles quarterback Jalen Hurts dedicated $60,000 to charity and another $70,000 to help cover his younger sister's college tuition in the future, he told GQ Sports.

In NFL quarterback terms, that's extremely cheap — which is why rookie contracts for breakout stars like Patrick Mahomes are so valuable while they last.

How far Hurts can take the Eagles in 2021 remains to be seen, but the general perception is that he's a polished leader and a mature and grounded athlete willing to put in the hard work it takes to thrive as a pro.

Hurts recently joined GQ Sports for its sit-down series on how various athletes spend the first $1 million they earn. They break out fake stacks of cash to illustrate the point and drill down expenditures into different categories, giving fans a bit of insight into the lifestyle of young professional athletes.

Hurts shared some interesting tidbits about his background, including talking about his job mowing lawns as a teenager in the Houston area.

Across all of his various expenses, charitable contributions and personal purchases, Hurts said he's spent or set aside about $262,000.

Fans will be happy to hear Hurts bought about $1,000 in Philadelphia sports jackets and other clothing. His total fashion bill for the year was approximately $30,000. The biggest expenses Hurts mentioned were about $60,000 for charity, including his work with Alex's Lemonade Stand, and $70,000 he's set aside to help with college tuition for his 16-year-old sister, a volleyball player who may well get an athletic scholarship.

"I haven't really talked to anyone about this one yet – not even my parents or my sister – just in case she needs it in the future," Hurts said. "She's 16 now and she's going to go to college one day. She's going to do great things."

Barring any unexpected splash from the Eagles in the 2021 NFL Draft, Hurts can be safely penciled in as the team's starter this year. He'll hope to perform at a level that starts building a case for his second contract.

In the meantime, Hurts said frugality is an important lesson to learn at a young age.

"If I could give any advice to a rookie coming into the NFL, having this amount of money for the first time ever in your life, be wise with your choices and decisions," Hurts said. "I know that you have things that you've always dreamed of having maybe — and that's perfect, like go get it, you earned it. But also be smart and mindful and prepared. It goes by quick — and that Uncle Sam is real."