Eytan Shander: Who is going to stop Lurie from meddling with the Eagles? Anyone? 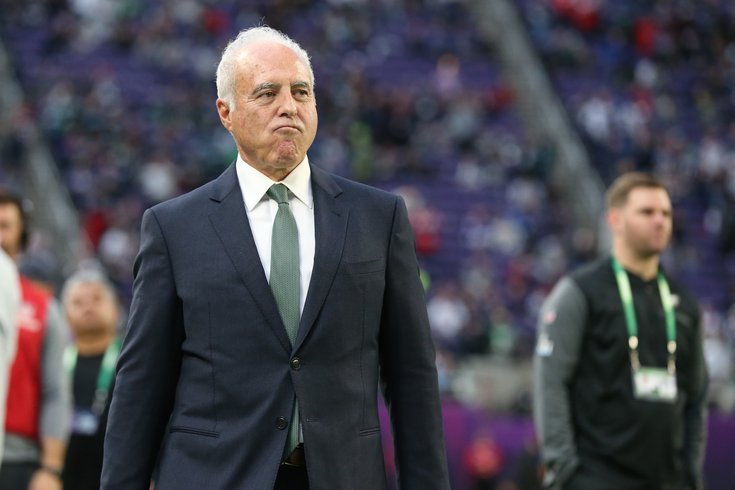 Every single week there’s another report.

This time it’s paranoia and cell-phone confiscations a plenty. We haven’t even hit the NFL Draft, yet the Eagles have more stories of inner-office drama than stockpiled picks!

We are past the “what a disaster” proclamations and have hit full-on “it’s mentally exhausting being an Eagles fan” mode.

We are trapped. There’s nobody to go to and complain. We don’t have an HR department of fandom, nor is there any ombudsman working for the Eagles. The only person to whom we could technically plead our collective case is the main culprit!

And where exactly would those complaints be heard? The team who just won a Super Bowl in 2017? All of this, including the latest about weekly meetings, confirms the owner and GM believe they won it in spite of Doug Pederson, not because of anything he did.

Go ahead and waste your time waiting on some caller line on the radio or thinking anyone in the organization reacting to your tweet equals them truly caring. We are stuck, once again, commiserating with ourselves.

The latest report may have shined the brightest light on why we are stuck as fans, not just today, but as we try to move forward. We now know how hands-on Jeff Lurie is when it comes to selecting the players of the future for the Philadelphia Eagles — and it doesn't seem like he's going anywhere (or changing) any time soon.

The other elements of the latest piece of drama are important. Paranoia and draconian measures to keep people afraid, weekly check-ups, and people wanting out of the building — all are key in understanding what happened, but looking ahead is why there’s little to no hope.

The people we want out – Howie Roseman and Lurie – believe they can do it again. Honestly, how can you blame them? The majority of the team assembled in ’17 has since crumbled under the eye of the since-fired head coach. The people at the top did it their way, and damn you to hell and back if you think you can do it any better.

I don’t have any long-term solution right now. There isn’t any thousand-word think piece that is going to solve this crisis. Mr. Lurie is all over the draft, for worse far more often than better. It’s the early stages of Dallas before Jerry Jones was “restrained” in the draft room from further selecting any players.

So, who’s gonna do it? You, Roseman? You, Hallaby? The son I didn’t even know Lurie had?

I’ll sit here on Twitter and take all of your complaints about this team and how poorly they are run. The awful direction they continue to head into this season while surrounded by a cloud of drama. How bad we feel for new blood like Jalen Hurts stepping into a situation where the team hasn’t even publicly backed him as the starter! But what can be done?

I feel like Michael Scott standing helpless in front of his staff as he relays the message from Jan in only his way: “It’s over… We are screwed.”

Lurie is drafting whoever the heck he wants and will always win the power struggle over (mini-Lurie) Roseman. There’s nobody else to even argue with anymore. He’s got us. He’s got me. I’m not going anywhere, but man, this is tough. It’s mental gymnastics trying to rationalize what’s going on with this team, combined with the charged emotion behind every opinion.

We simply have to all agree that we’ve turned into what we all thought was impossible: miserable Cowboys fans watching an owner belligerently wield his stick of influence. The only difference here is we don’t have to go all the back nearly three decades to remember our last parade.

Like so many of you out there I too was saddened to see DMX lose his battle with addiction. For someone who made such an impact on hip-hop culture and rap music, he clearly dealt with his own demons. A struggle manifested in both his music and, ultimately, his death.

I see a lot of lists, Top 5's, Mt. Rushmore’s of his songs, and I think – far too often out loud – of what gets missed in reducing DMX or any artists for that matter to a Top 5 list. There are two songs that highlight the impact he had on the current culture but are often lost because they are features.

The first comes on his first album, the last song on the album. It features a stronger-than-normal set of verses from The Lox. It solidified the major departure from Puffy and Bad Boy by The Lox into the Rough Ryders that X helped create.

They were one of the few to leave Bad Boy and not because of jail or death. Paying any monetary price was worth it for The Lox to be a part of DMX’s new crew. The song also features the single best verse Ma$e has ever provided. Speaking of Combs, you can see exactly what he saw in the young rapper in that verse alone. Ma$e got turned into a party rapper, but had some vicious bars.

The next track – also a feature – is an easy one but often skipped over in the defining legacy of DMX. “Blackout” on the second album again features The Lox, but in even rarer form. It features two of the three members’ best single verse – in my opinion – be it solo or in the group, Jadakiss being one of them.

The “easy” part of this song comes in Jay-Z’s verse. One that matches the tone and tempo as effortlessly as X, who ultimately ends it in the most unique ways, with his own signature. That's the only way to follow a giant like Jay.

Finally, the intro on "It’s Dark and Hell is Hot" revolutionized how artists could weaponize their albums. It was an amazing tool to create a new track out of nothing. What was normally reserved for a skit or something far more bizarre had turned into one of the hardest songs X ever produced. It will still go down as one of the most memorable introductions on any album in any genre of music.

This one was a little different. The newest documentary coming out of ESPN will feature the show American Gladiators. It turns out that my godfather, Eytan Keller, was the producer who was instrumental in the show’s growth.

Did you know the initial 13-episode season of AG was a failure? That Sam Goldwyn personally asked Keller to fix the show? Keller also mentioned some immediate changes he made, including to some events like the Joust!

Check it out here as he joins The Middle...