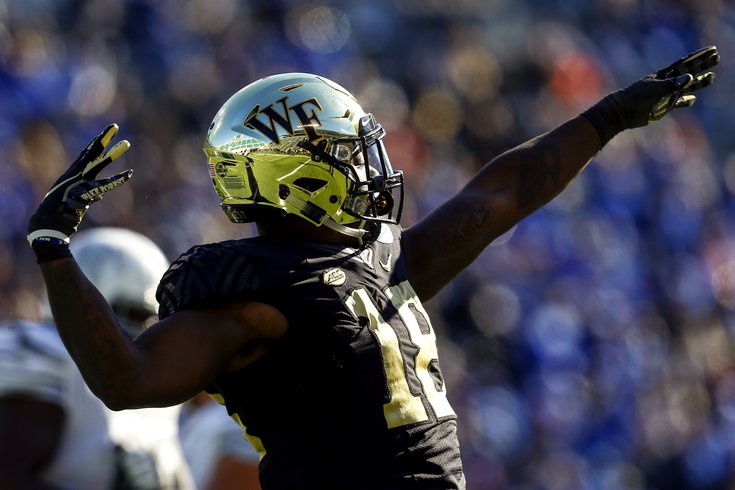 Why do this? Well, you already clicked, so got 'eem. Boom, I win. Here's my pointless, certain to be very inaccurate 2021 second-round NFL mock draft. The Eagles presently hold the fifth pick in the second round.

33) Jaguars: Christian Barmore, DT, Alabama. Barmore is the best interior lineman in a weak DT draft. In six years as the 49ers' GM, Trent Baalke drafted three defensive linemen (two DTs) in the first round. He also took a DE in the first round of his lone draft with the Jags in 2020.

34) Jets: Jeremiah Owusu-Koramoah, LB, Notre Dame. JOK is a hyper-energized LB/S prospect who flies around the field and makes plays. I'm not sure how he didn't get taken in Round 1. He can be a modern three-down linebacker for the Jets.

35) Falcons: Azeez Ojulari, DE, Georgia. Ojulari would have easily been a first-round pick if not for a reported potentially degenerative knee issue. 9.5 sacks and four forced fumbles in 10 games in 2020.

37) Eagles: Carlos Basham, DE, Wake Forest. In 2019, "Boogie" had 57 tackles (18 for loss), 10 sacks, and three forced fumbles for Wake. He followed that up with five sacks and four forced fumbles in just six games in 2020. Basham is a thick, powerful rusher who gives off some Brandon Graham vibes, who plays on both sides, can also shift inside on obvious passing downs, and is a good run stopper. He also has a good repertoire of pass rush moves, and he's a high-energy player.

38) Bengals: Teven Jenkins, OT/OG, Oklahoma State: Jenkins has plenty of game experience both at LT and RT, and also has a couple of starts under his belt at RG. He isn't an elite athlete, but his overpowering strength has become sort of legendary in the Oklahoma State weight room. The Bengals were criticized for passing on Penei Sewell in Round 1, but they find some protection for Joe Burrow here.

39) Panthers: Trevon Moehrig, S, TCU. In 2019, Moehrig had four INTs, two FFs and an impressive 11 pass breakups from his safety spot. He had two INTs and and nine pass breakups in 2020. His ball skills and ball-hawking ability are obvious, and he is a smart deep safety who reads routes and has enough speed to get from sideline to sideline, who also has the versatility to cover from the slot.

41) Lions: Terrace Marshall, WR, LSU: Marshall (6'2, 205) was the third receiver in the pecking order at LSU behind Ja'Marr Chase and Justin Jefferson in LSU's offense during their championship run in 2019, but he was still productive in his own right, catching 13 touchdowns as a sophomore. In 2020, with Jefferson off to the NFL and Chase opting out for the season, Marshall had a chance to shine, which he did, catching 48 passes for 731 yards (15.2 YPC) and 10 TDs in seven games. He was averaging about seven catches for 104 yards and 1.4 TDs per game, when he too decided to opt out for the rest of the season to prepare for the NFL draft. He is a big, strong receiver with good speed for a guy his size who can beat press coverage, win contested catches, and operate both from the outside and in the slot. He also has very good hands, and rarely drops passes.

42) Giants: Joseph Ossai, EDGE, Texas: Elite athlete who had 5.5 sacks, 15.5 TFLs, and 3 FFs in nine games in 2020. The Giants surprisingly drafted a wide receiver instead of their choice of edge rushers in Round 1.

43) 49ers: Tyson Campbell, CB, Georgia. Campbell is something of a wildcard in this cornerback class. He has coveted length and rare athleticism. However, the results on the field haven't always matched his impressive size and athletic measurables, and there are concerns about his technique and consistency. He has all the tools, but only had one INT and 10 PBUs in 31 career games.

44) Cowboys: Ifeatu Melifonwu, CB, Syracuse. 6'2, 205, with athletic gifts, but his game needs refinement. The Cowboys traded back in Round 1 after Jaycee Horn and Patrick Surtain came off the board.

45) Jaguars: Pat Freiermuth, TE, Penn State. I couldn't think of the Jags' TE without looking. Freiermuth is a solid all-around tight end, and the Jags will need to give their shiny new quarterback as many weapons as possible.

46) Patriots: Elijah Moore, WR, Ole Miss. Mac Jones unexpectedly fell to the Pats in Round 1, and Moore, an outstanding explosive slot receiver prospect, somehow falls to them in Round 2.

47) Chargers: Asante Samuel Jr., CB, Florida State. Samuel had a lot of PBUs in his FSU career (29 in 31 games), and he started to get a knack for picking off passes in his final season in 2020, when he nabbed three of them in eight games. But, he's only 5'10, 180. Obviously that's not ideal for an outside corner, but like his dad, he doesn't lack for confidence, and he played outside at FSU.

48) Raiders: Richie Grant, S, UCF. Grant is a well-rounded deep middle safety who had 10 INTs, five forced fumbles, and 17 pass breakups over the last three seasons for UCF. He also has 258 tackles over that span, leading the team in tackles both in 2018 and 2020.

49) Cardinals: Rondale Moore, WR, Purdue. Moore is one of the best players in this draft from a pure "fun to watch" perspective. At 5'9, 180, he's a small receiver, but he breaks an inordinate number of tackles, and his explosiveness is obvious. In some ways he's a little reminiscent of Penn State's KJ Hamler, in that he's a small speed slot guy with durability concerns, but in my view he is a superior prospect because he has better hands. He was also incredibly productive in two years at Purdue on "per game" basis. In 20 career college games, he averaged 8.9 catches for 95.8 yards and 0.7 TDs.

50) Dolphins: Ronnie Perkins, DE, Oklahoma. Perkins finished his OU career strongly, collecting 5.5 sacks and 10.5 TFLs in six games. He has some juice, he plays hard, and he's good against the run, despite being listed at just 253 pounds.

52) Bears: Dyami Brown, WR, North Carolina. Brown averaged at least 20 yards per catch on at least 50 receptions each of the last two years. OK, so he actually averaged 19.98 YPC in 2020, but shut up. As you might guess, he's an outside speed guy.

53) Titans: D'Wayne Eskridge, WR, Western Michigan. It feels like each year, people want to say a receiver reminds them of Steve Smith, because he's undersized, athletic, and plays with an edge. Eskridge is that guy this year.

54) Colts: Brady Christianson, OT, BYU. Older prospect, but the Colts need someone who can play immediately at LT.

55) Steelers: Landon Dickerson, C, Alabama. The Steelers have a glaring need at center, but also, I just want to hear announcers say, "Oh, man, this guy is a classic Steeler."

56) Seahawks: Kelvin Joseph, CB, Kentucky. Joseph's highly impressive athleticism, notably his 4.34 40, is intriguing, but he comes with significant effort concerns. The Seahawks take chances on guys like him.

57) Rams: Creed Humphrey, C, Oklahoma. Plug and play C, and a position of need for L.A.

58) Chiefs: Quinn Meinerz, C, Wisconsin-Whitewater. Tough, nasty iOL who can give the Chiefs some depth and versatility.

60) Saints: Amon-Ra St. Brown, WR, USC. St. Brown is a slot receiver, but he's a little different. While no slouch athletically, he may not have the waterbug-like stop-start quickness as some of the other slot guys in this draft, but is tough and and physical from the inside, and will fight for yards after the catch. He also has good hands and he tracks deep balls well.