John McMullen: Eagles will have many paths to choose from in first round of NFL Draft

Roseman has a history of making draft-day trades. Does he have another in store for this year, or was one enough? 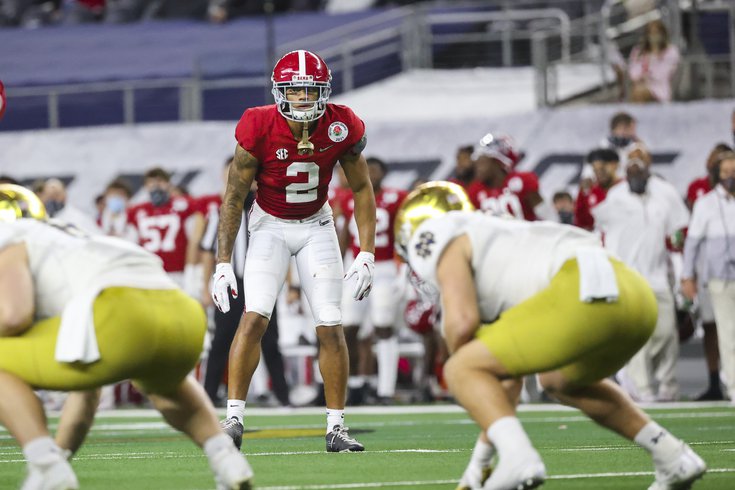 Would Howie Roseman be willing to trade up for Alabama Crimson Tide defensive back Patrick Surtain II?

We’ve officially reached the paralysis-by-over-analysis phase of the NFL Draft buildup with one unnamed national reporter giving you the straight skinny on Eagles GM Howie Roseman — he might spring forward or fall back.

Heck, Roseman might even play Hawaii or most of Arizona and refuse to observe the draft version of daylight savings time and just stay at No. 12.

That veteran insider is correct, of course. Common sense tells you that those are the three paths for Roseman and anything is possible with the Eagles GM, who has moved 26 times in the draft process (10 upward and 16 back), per the research of Brad Spielberger from ProFootballFocus.com and OvertheCap.com.

That used to be 10 vs. 12 before consecutive drafts in 2018 and 2019 in which Philadelphia had only five total picks in each.

Now that trader Howie is back to representative samples in the draft you can safely assume the nearly 50/50 range of up vs. down is probably the safe bet.

The late money at No. 12 is ignoring franchise history and settling in on cornerback or receiver as the debate — presumably South Carolina’s Jaycee Horn and the loser of the Alabama WR duel to be selected first between Jaylen Waddle and Devonta Smith.

“It comes down to what they want to do,” former Eagles scout and lead NFL Network draft analyst Daniel Jeremiah said last week. “I would say if I’m guessing what they would do in that situation, I would say it would be hard for them to go receiver in back-to-back years. I guess they would go corner.”

Jeremiah himself noted he would probably pound the table for Waddle, an explosive “Z” receiver who would serve as at least somewhat of a redundancy to Jalen Reagor, that aforementioned first-round pick from 2020 who is penciled in as the flanker.

From a fit perspective, the Eagles need an “X” receiver or a split end. Think Alshon Jeffery, a player who can excel getting off physical press coverage at the line of scrimmage and handle back shoulder-type throws as well as turn 50/50 balls into 80/20 for the offense.

“I know they took a receiver last year with Reagor and I know you don’t want to keep going back to those types of positions in the first round,” said Jeremiah. “You want to build at the more premier positions and corner would outrank receiver, but I would take Waddle.

“He’s too intriguing to me with what he can do in a league where you need explosive plays. He gives those to you. He’s going to take a lot of pressure off the quarterback, he’s going to have an influence on the run game too.”

Long-time former longtime Cowboys GM Gil Brandt, a living legend when it comes to NFL Draft circles, agrees with Jeremiah’s assessment — that if Waddle is there he should be the pick and let the chips fall where they may elsewhere.

“Provided his ankle is OK, pick Waddle,” said Brandt. “I think Waddle is really, really a good player. They’ve failed picking a wide receiver in the last four or five years and they have this draft pick they took two years ago (J.J. Arcega-Whiteside) that was going to be so good and he hasn’t turned how to be much of anything and that’s hurt them.

“They have a retooling job.”

The Eagles have typically stressed value on their draft boards over the years, preferring to use premium picks on the more important positions, namely quarterback, offensive line, and defensive line.

In fact, you have to go back to pre-Jeffrey Lurie to find an Eagles team that took something other than QB, OL, or DL in the top-half of the draft when the franchise selected tight end Keith Jackson with the No. 13 overall selection in 1988.

In his role now Jeremiah admits he’s serving as sort of a 33rd team, not necessarily taking into account each team’s needs, schemes, or previous predilections. That said, he made it clear why he would double down on Waddle.

“Anything you might’ve liked about Jalen Reagor, Jaylen Waddle does all those things infinitely better,” he said. “So, to me, at least you put them out there you hope Reagor grows and continues to grow and now you have a track team when you have those two guys out there because they can both fly. That would be the way I go.”

The Eagles aren’t in a position to get a QB although curiously CBS’ Jason La Canfora notes a Roseman trade up would likely be with signal callers (likely Trey Lance and Justin Fields) or Philadelphia-area native Kyle Pitts, a super-charged tight end, in mind.

That’s a curious path to take now because the GM might have been in a position to get at least one of those players at No. 6 in the first place.

History will judge that projected move on the haul Roseman got in return from Miami for moving down vs. what he gives up to move back up. If that’s a net positive — and that’s the only way Roseman does something like that — the GM will be lauded around the league, but circumstance and a little luck should get the real credit there even if spun as three-dimensional chess.

As for why so many are ignoring the Eagles’ previous draft history and focusing on receivers or corners, that’s also circumstance.

From the offensive line perspective, there are two players who will almost surely go in the top 12, tackles Penei Sewell of Oregon and Rashawn Slater of Northwestern, with the latter projecting inside to guard by many.

It’s unlikely either would be available to the Eagles, although there’s at least an outside chance Slater might fall. Two others, Virginia Tech OT Christian Darrisaw and versatile USC OL Alijah Vera-Tucker could be argued and would incense the fan base.

It’s a very weak year at the top of the defensive line, although there is some late hype on Michigan’s Kwity Paye, who seems to be settling in as the No. 1 edge rusher and could go as high as No. 11 to the New York Giants.

Instead of your typical mock draft nonsense, we are going to shoot for the three paths Roseman could take: trade up, trade down or stand pat, with a bonus of the Mike Mayock-Clelin Ferrell shock-the-world pick...

Trade up: CB Patrick Surtain, Alabama — Horn has the higher ceiling as a player but Surtain is the more polished product. And if the Eagles do move up, it will only be a few spots to try to keep the Alabama star away from the Dallas Cowboys.

Trade down: OL Alijah Vera-Tucker, Southern Cal — Jeremiah called Vera-Tucker one of the safest and cleanest picks in the draft and outside the top six or so picks. He’s the one you’ll be looking back on as the three-time Pro-Bowl selection in, say, six or seven years.

Stand Pat: CB Jaycee Horn, South Carolina — Horn has the biggest upside at a position that’s an obvious need and has yet to be addressed in the offseason. It also is a rock-solid selection from a sensible perception standpoint and never underestimate that when it comes to embattled front offices.

Shock the World: Edge Jaelan Phillips, Miami-Florida or CB Caleb Farley, Virginia Tech — Let me first say it’s far more likely that Phillips and Farley aren’t even on the Eagles’ board as flagged players, but if Philadelphia did do its research and Arsh Dhanota, the team’s chief medical officer, is comfortable with the medical hurdles with either Roseman could find his vaunted value with enormous talent who are being marked down for other reasons. In Phillips’ case, he has top-10 talent and Farley was the CB1 in this class before back surgery emerged.

Make sure to subscribe to the JAKIB Media YouTube page for over 40 hours of NFL Draft coverage featuring Derrick Gunn, The Middle with Eytan Shander, Harry Mayes, and Barrett Brooks, and BIRDS 365 with Jody McDonald and John McMullen.

You can also watch extensive coverage live on PhillyVoice.com and presented by IBEW LOCAL 98 Thursday:

In South Jersey, you can then listen to The Fix with Ryan Rothstein on AM1490.

And throughout the draft on JAKIB Media's YouTube channel, Derrick Gunn will go live with his "Draft Takes" after each and every Eagles pick, plus reaction from Eytan and Harry, the BIRDS 365 guys, and Big Daddy Graham with Philly's biggest fan, Johnny Doc.