Mailbag: How many current Eagles players are locks for the 53-man roster? 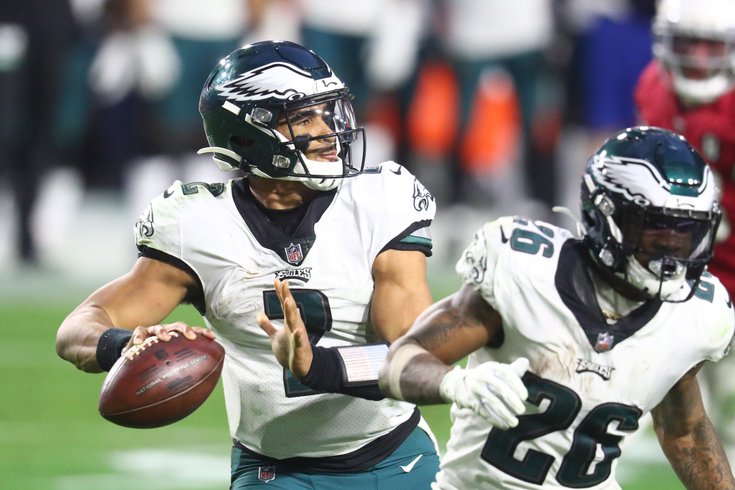 We did not have our usual Eagles chat this past week, but let's catch up on some questions via Twitter and email, as the 2021 NFL Draft is now only four days away.

Question from Bill: Can we get a quasi depth chart? Current players you expect to play Week 1?

So if I'm projecting clear-cut roster-worthy players, whether that be a result of actual quality play, recent draft status, contract status, or potential, I only got to 34 players. 😬

Rodney McLeod will likely start the season on the PUP list, but won't count toward the initial 53, and of course we omitted Zach Ertz, who is likely a goner.

The Eagles are going to have to fill in the rest with draft picks, undrafted free agents, and then fringe roster guys like J.J. Arcega-Whiteside, John Hightower, Matt Pryor, Hassan Ridgeway, Genard Avery, Shaun Bradley, and others.

This is the thinnest roster the Eagles have had that I can remember since I began covering the team full-time in 2013.

Question from Bill (different Bill): Assuming the Jets draft Zach Wilson, who in the NFL would have more draft capital than the Eagles to get Deshaun Watson?

With the obligatory disclaimer that we still have to see how Watson's legal situation plays out, and what facts emerge from that case, the team to watch out for that could have a combination of heavy draft capital in 2022 and a potential need at quarterback is the Lions. They have an extra first-round pick both in 2022 and 2023. However, Watson has a no-trade clause, so he’d have to want to play in Detroit, and, I mean, who wants to play for Detroit?

The other team is the Dolphins, who wouldn’t be a tough sell to Watson, and have an extra first-round pick in 2023.

Question from Bryan: Does Andre Dillard have OG potential?

He can't anchor, and if you can't anchor as a guard, the conversation doesn't even begin, in my opinion.

Question from Tony: More a comment than a question (you're welcome!), but seems like the Super Bowl Eagles have less lasting identity than other great Eagle teams of my life — White/Cunningham/Buddy Ryan, Reid/McNabb/Dawkins — with 2017, love the players, but as a team, one magical year, then (fart noise).

I can kinda see that. The quarterback who closed the deal was only with the team for two years during that particular stint in Philly, and the other quarterback will be remembered by a significant percentage of the fan base as the guy who wanted out as soon as he faced some real adversity. And both guys were boring in interview sessions. The head coach was masterful that one season, but fairly or not will be discredited by some who believe that his staff of assistants that year had a lot to do with his success.

Otherwise, in terms of bombastic personalities, Jason Kelce would qualify. And then there were other high-profile players with varying personalities in Jason Peters, Lane Johnson, Malcolm Jenkins, Brandon Graham, etc., but you're right to wonder how the memory of the individuals on that that team will age over time.

We actually profiled him in our Grocery Shopping series in 2018. I had him as a Day 3 guy. If you go back and read what we wrote about him, apparently people were including him in the first round of some mocks at the time.

He ended up going undrafted in 2019, and Buffalo signed him as a UDFA. He did not make the team, or land on a practice squad. He did get drafted that October by the DC Defenders (XFL), nine yards. He rushed nine times for 48 yards.

I don't think he has a future at QB in the NFL, ha. But, I do think he's at least worth taking a look at in camp, given the success of Logan Thomas, who made a similar transition from oversized, athletic-but-unrefined QB to TE.

Question from Frank: If you had to draft only fantasy characters (LOTR, Star Wars, Marvel, etc.), who are you drafting to the Eagles and to play which positions?

This might be something of a chalk answer, but my No. 1 overall pick would be Superman. I’d play him at QB, I guess. There’d really be no reason for any other player on the team to touch the ball, since he could just fly over everyone and score at will.

Actually, there’s some game tape of Superman, or Clark Kent or whatever:

If Clark Kent can throw a pass, save his friend mid-play, run back to where he threw it, and then take a big shot from the generic No. 99 pass rusher, all while delivering a dime, how in the hell did they only have 17 points through the first 59:55 of the game? I want to know who that defensive coordinator on the other team is. He held that guy to 17 points, and then didn’t even have a safety back deep with 5 seconds left and a four-point lead? Is Gregg Williams now coaching the rival team on Smallville?

Anyway, Superman’s game tape aside, even if some team figured out a way to slow him down, I’d still never lose again. Beyond the fact that he can, you know, fly and shoot lasers from his eyes, he can reverse time. So in the unlikely event we ever lost, I’d merely say, “Uh, Superman, that game never happened, if you catch my drift.” And we’d just play it again and again until we won.

Now I know that draftniks will focus on the idea that someone could kill him with kryptonite, but if the best argument against drafting a guy is, “Well someone might murder him,” that could be said of pretty much any prospect.