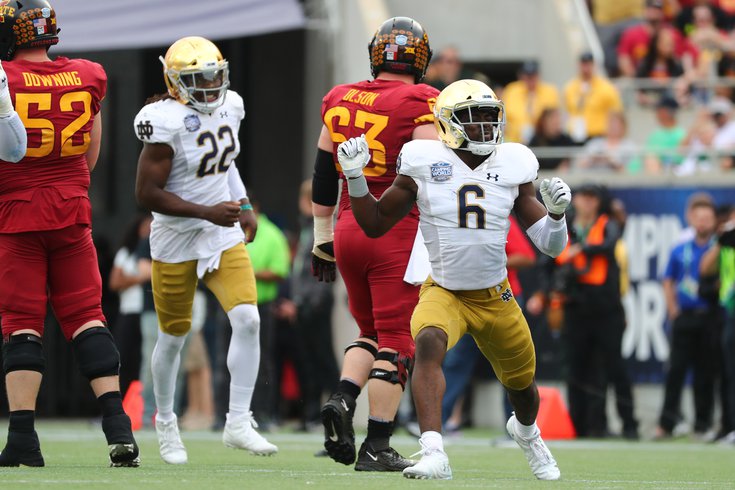 Notre Dame LB Jeremiah Owusu-Koramoah would be a steal for the Eagles in Round 2.

With Day 1 of the 2021 NFL Draft in the books, a bunch of nerds (self included) put out second-round mock drafts. Here's who some folks have the Birds taking with their 37th overall pick.

The Eagles have never put a premium on linebackers, but Nick Sirianni brought defensive coordinator Jonathan Gannon with him from Indy, and those two saw firsthand the value of a big-time linebacker in Darius Leonard. Cox isn’t at Leonard’s level—he struggles to get through traffic—but his speed is perfect for Gannon’s fast-flowing defense.

#JimmySays: From a writer's perspective, yes, the Eagles should add a second Cox.

Samuel Jr. is sized like a slot corner but has the tenacity and ball tracking skills to stay on the outside in Philly.

#JimmySays: He's roughly the same size as his dad when his dad played.

Adding linebackers -- and more specifically, linebackers who can cover -- is a pressing need for the Eagles. Owusu-Koramoah is fluid, smooth and fast in coverage. He flashes the ability to pressure quarterbacks with his closing burst and suddenness. He's the No. 12 player on our board and an absolute steal at this point.

This would be a slam dunk pick for Philly. Jeremiah Owusu-Koramoah was projected by many to be a first-round pick and now the speedy, versatile linebacker falls right into the team’s lap in the second. JOK is an instant impact defender who can defend the run, cover the slot, and blitz from all over the formation.

#JimmySays: The Eagles should consider trying to trade up for JOK.

The Eagles’ two biggest needs entering the 2021 NFL Draft were playmakers on the perimeter. They addressed the offensive side of the ball by trading up for Alabama’s DeVonta Smith in Round 1, leaving the cornerback position as the clear position to target on Day 2.

Robinson manned the slot for UCF, but he has the size and press experience to potentially move outside. His speed, short-area burst and physicality should all be appealing to an Eagles’ defense that needs an injection of talent at cornerback alongside 2020 trade acquisition Darius Slay.

#JimmySays: Meh. This is just taking a CB because you need a CB, and the Eagles shouldn't be reaching for needs in the midst of a multi-year rebuild. To be clear though, this wasn't a mock, necessarily. It was more a look at a prospect that makes sense for each team. Still... 👎.

The Eagles still are expected to move Zach Ertz and need to better support Nick Sirianni's use of 12 personnel for Hurts after taking DeVonta Smith for wide receiver in Round 1. Freiermuth is a well-rounded tight end with a strong baseline of blocking to go along with reliable receiving on intermediate routes.

The Eagles traded up to get Alabama wide receiver and Heisman Trophy winner DeVonta Smith in the first round, but they get beat here for the first cornerback off the board for Day 2. Moehrig isn’t a bad consolation prize.

#JimmySays: After signing two safeties in free agency, the bet here is that the Eagles will punt on addressing the safety position in any real meaningful way to 2022, but Moehrig would certainly be good value here.

Campbell and first-round pick WR Davonta Smith can recreate that Alabama-Georgia rivalry every day in practice.

Many expected the Philadelphia Eagles to address cornerback in the first round given the need at the position, but they traded up into the top ten to select DeVonta Smith, the talented wide receiver. Now they look to the secondary and add Tyson Campbell from Georgia, a solid boundary corner with good change-of-direction skills.

#JimmySays: Campbell was getting some first-round hype leading up to the draft. I didn't see it, and I don't see the value at pick 37 either, but others do. He does make sense for the Eagles' defense.

He goes to the same town where his dad starred, giving Philly needed relief in the secondary. And Iggles fans will appreciate that Samuel the Younger is a more willing tackler than dad sometimes was.

#JimmySays: Eh, I don't think Jr. will be confused for Ronnie Lott on the tackling front either.