What they're saying: Was Landon Dickerson a home run pick? Is Jason Kelce's job at risk?

Also, will the Eagles sign a free agent corner or receiver? 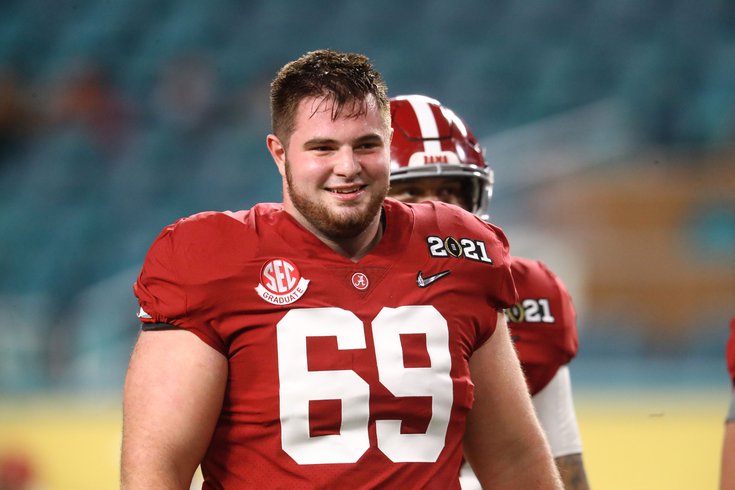 We've now had a few days to digest the Eagles' nine-player, two-trade draft performance this past weekend, and it seems like the reaction across the board is overwhelmingly positive.

The team didn't just add a ton of talent and potential staples for the future of the roster. It also improved its standing and ammo for 2022, creating a new feeling of optimism that while 2021 may be a lost season on the field (they currently have the sixth worst Super Bowl odds at +8500, according to FanDuel via Pickswise), the big picture remains promising.

There have been a variety of interesting takes and tangents taken by NFL and Eagles writers over the last few days, and we felt it may be helpful to compile a few of the most intriguing ones, ranging from potential free agent targets to predictions about some of the more questionable draft picks made by the Birds.

There was a video posted by the Broncos before they made their ninth overall pick — which landed them cornerback and Eagles target Patrick Surtain II — where Denver GM George Paton sounds like he's on the phone with Howie Roseman, who is probably making some kind of offer to trade up to No. 9 from No. 12. Ultimately, Roseman pulled off a move to get the 10th pick from the Cowboys, avoiding the possibility of missing out on all of their targets and landing DeVonta Smith.

But what if the Eagles had pulled the trigger with the Broncos. Would they still have taken Smith? Here's more from former PhillyVoice writer Adam Hermann:

The Broncos wound up standing pat at No. 9 and selecting Surtain, considered by many to be the most complete defensive back in the draft. If Roseman trades up to No. 9 and both are available, there's at least a part of him that would've been considering taking Surtain... right?

The Eagles haven't had a young stud corner in years. They haven't drafted a corner in the first round since Lito Sheppard in 2002. It would've broken from tradition - particularly after a trade up - but Surtain might be good enough to warrant it.

It's a fascinating thought experiment, and one definitely worth entertaining after such a chaotic first round. Teams always have plans, but sometimes the board falls unexpectedly and you have to adapt. Roseman handled the first round well - and he nearly handled it well in a different way. [NBC Sports Philadelphia]

While on the topic of the player the Eagles did take, the Heisman Trophy-winning wide receiver Smith, the feeling across the NFL seems to be that the move was not only a quiet endorsement of current Eagles quarterback Jalen Hurts, but also a key weapon to help him succeed in his sophomore season. The pair of one-time Alabama stars went to the Sixers game together this past weekend, already working on building up their chemistry. Hurts, you could argue, was one of the biggest draft winners.

The Eagles could have grabbed Justin Fields at No. 12. They could have stayed put, kept their extra third-rounder and taken the former Ohio State star if they didn’t feel Hurts was going to progress into a solid QB in 2021. Sure, they’ve also spent a good deal of time loading up on draft capital next year to go after a QB either in free agency or in next year’s draft, but for this year, Roseman and the coaching staff all but assured him he would be their starter.

The selection of Smith also brings in one of the best wide receiver talents to come into Philadelphia since DeSean Jackson was drafted, and being former teammates with Smith at Alabama can only be a good thing for their rapport. In the second round, the Eagles selected another former teammate of Hurts, oft-injured center/guard Landon Dickerson, a mountain of a man who, if healthy (and that’s a big if) could take over for Jason Kelce as soon as 2022, providing real protection for Hurts

Finally, in Round 5, the backfield received a potential boost with Memphis running back Kenneth Gainwell, a sleeper pick most draft experts believed was a steal for the Birds at No. 150 overall. All in all, the draft really couldn’t have gone any better for Jalen Hurts. [BGN]

After the completion of the draft, the Inky's columnist Domowitch spoke with NFL Network's Brian Baldinger, who gave some color and analysis on each of the Eagles' picks. One in particular is interesting, as the draft expert not only had high praise for the Eagles second round pick, oft-injured interior lineman Landon Dickerson from Alabama, but he thinks the ultra-talented player has a chance to start in 2021... ahead of Jason Kelce...?

“He’s my favorite player in the draft. He’s as close to [Colts All-Pro left guard] Quenton Nelson as I’ve seen in the last three years. He just wants to be great. Nobody knocks more people down in college football than this guy. He’s as nasty as they come. He’ll start the fight and finish the fight. [Nick] Saban has called him the best leader they’ve ever had. He’s just a culture builder. Going in to play the Cowboys, you want this guy leading you out of the tunnel. He’ll make everybody around him better. Everybody. Just like Quenton Nelson did in Indy.

“I know there are injury questions about him. But I didn’t have any problem with them rolling the dice on this kid in the second round. Because if he stays healthy, he’ll be the best lineman in this draft. He might take over for [center Jason] Kelce this year. He’s 50 pounds heavier than Kelce. He’s much more physical. We all love Jason. But he’s flirted with retirement a couple of times and his body isn’t getting any fresher. His strength is on the perimeter and getting to the second level. This guy has Jason Peters-type power. He just knocks people in the dirt. Like over and over again. When you’re going against Dexter Lawrence and all these big nose tackles in the league now, I don’t see anybody backing this guy up. You look at all those [defensive tackles] in the SEC that are 320, 330, 350, he didn’t have a problem with any of them." [Inquirer.com]

The Athletic sorted out all 32 draft classes and ranked them, and what do you know, the Eagles are ranked No. 1. Not only did they grab an impact player in Smith who could be the No. 1 wide receiver for over a decade in Philly, their subsequent picks also were received extremely well. Here's a snippet of why he likes the draft class so much (with some more love for Dickerson).

The Eagles had no shortage of candidates here, which is the main reason they are No. 1 on my list. But Dickerson gets my vote because of his combination of high-end talent at any of the interior line positions and his impact in the locker room. His injury history is troublesome, but well worth the risk.

This was a tough choice between McPhearson, Gainwell and Tuipulotu, but the cornerback is the pick because I thought he went widely underrated throughout the process. The Penn State transfer looks comfortable in both man and zone and shows outstanding fluidity and toughness to mirror receivers. [The Athletic]

The Eagles still have a glaring need at cornerback and have little cap space left as the team prepares for training camp this coming summer. With the draft over, the attention of the team now turns to filling out the roster and it stands to reason that the team could ink a few free agents between now and then. Believe it or not, there are some really good players still jobless.

The Eagles waited until the fourth round to address their biggest need, cornerback, selecting Zech McPhearson to start Day 3. While McPhearson has the upside to develop into a solid No. 2 outside cornerback, the Eagles need urgent help opposite Darius Slay.

Multiple times during the draft, GM Howie Roseman acknowledged the lack of depth at the position and hinted that he will take other avenues (free agency, trades) to solve the problem.

With former Steelers cornerback Steven Nelson hanging out on the open market, he should be Roseman’s first post-draft call. While Casey Heyward and some other “names” are out there, Roseman has to prioritize price and fit. Nelson makes the most sense. [NJ.com]

And finally, while we're discussing free agent options, the Eagles' improved wide receivers room is missing one thing — a veteran. Every single player right now on the roster at wideout is in their early 20s, and while that is not necessarily a bad thing for a rebuilding team, there is always a need for a veteran presence in every positional meeting room. There are still some interesting names looking for new homes in 2021. Could the Eagles snatch up a familiar face like, say, Golden Tate to help sure up their receiving corps?

But now, after an up-and-down tenure with the New York Giants, Tate is looking for another opportunity to continue on his NFL career. Could a return to Philly be in the cards?

Well, that depends on how the team plans to deploy their past two first-round picks in 2021.

If Nick Sirianni opts to play Jalen Reagor and Devonta Smith on the outside, then yeah, there’s a spot for a viable slot specialist on the roster to split time with Greg Ward and whoever else ends up taking snaps on the inside. If, instead, either Reagor or Smith receive most of their offensive snaps on the inside – or the duo cycle from inside to out depending on the individual matchup or play – then it may make more sense for the Eagles to instead look into a veteran receiver like Laquon Treadwell or Bennie Fowler, neither of whom looked particularly good for the Atalanta Falcons or New Orleans Saints in their respective 2020 seasons.

Then again, the Eagles may just opt not to sign a veteran receiver at all, leaving this whole conversation rather moot. [Fansided]