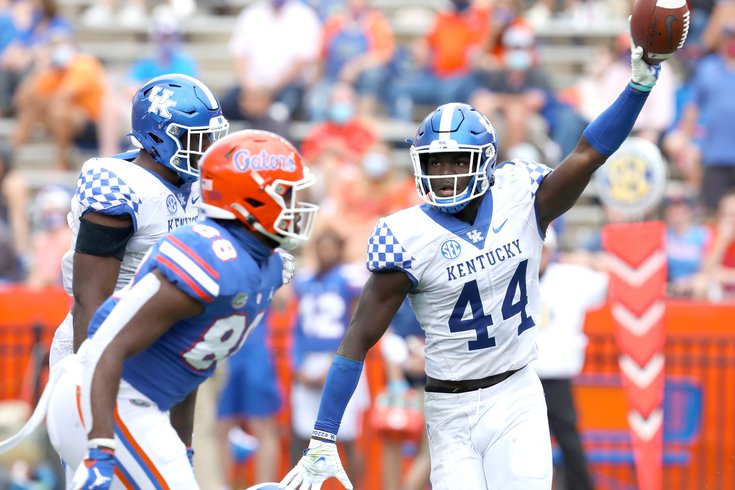 In their first Ron Rivera-led draft in 2020, the Washington Football Team made the right move by selecting Chase Young instead of Tua Tagovailoa, and they also found a pair of starters on Days 2 and 3 in RB Antonio Gibson and S Kamren Curl, respectively. Let's grade Rivera's 2021 follow-up draft here.

• Pick 19 (Round 1): Jamin Davis, LB, Kentucky. The Football Team were the only team in the NFC East to "stick and pick" in the first round, and they landed Davis, an athletic freak of nature with good length.

In 2020, Davis racked up 102 tackles, 1.5 sacks, and three INTs. He was a lesser-known prospect who began getting first round buzz as the draft got closer and closer. A look:

While linebacker is arguably not a position to prioritize in Round 1, the Football Team had a clear need there, and with former linebackers serving as the head coach (Rivera) and defensive coordinator (MagaJack Del Rio), they felt likely to address it. Davis should immediately be a Day 1 starter, and he could be the Football Team's best linebacker out of the gate.

• Pick 51 (Round 2): Sam Cosmi, OT, Texas: The Football Team grabbed Cosmi in the middle of a run on second-round offensive linemen, in which 10 were taken. Cosmi is sort of a high floor, low ceiling type who can fill the Football Team's gaping hole at LT. This was a pure need-filling pick, in my opinion. We'll touch on that more in the overall grade portion of this post.

• Pick 74 (Round 3): Benjamin St-Juste, CB, Minnesota: After the run on offensive linemen, there was a run on quarterbacks that the Football Team may have wanted to get in on, in which Kyle Trask, Kellen Mond, and Davis Mills all came off the board in a four-pick span in the 60's. Instead, with those quarterbacks off the board, they added St-Juste, a long, 6'3 press corner who doesn't run that well, but is well-equipped to handle bigger, physical receivers.

• Pick 82 (Round 3): Dyami Brown, WR, North Carolina: Brown is a productive, down-the-field the receiver who caught 105 passes for 2133 yards (20.3 YPC) and 20 TDs the last two seasons in a talented North Carolina offense. I love the highlight at the 3:00 mark below. He knows he had one-on-one coverage, and he calls for the ball pre-snap, then dusts 2020 first-round pick A.J. Terrell.

Brown gives the Football Team another young receiver to develop along with other young guys like Kelvin Harmon, Antonio Gandy-Golden, and Cam Sims, alongside the already established Terry McLaurin, Curtis Samuel, and Adam Humphries. I kinda like that mix of receivers.

• Pick 124 (Round 4): John Bates, TE, Boise State: Bates only had 47 catches for 579 yards and 2 TDs in 46 career games at Boise. He was expected to put up good testing numbers at his pro day, given his track background in high school, and then kinda didn't. In looking for some video of Bates, I found that Zach Ertz(!) actually broke down his game.

Bates is thought of as a good blocker, and the Football Team needed an in-line TE to pair with Logan Thomas, but was it crucial to over-draft this guy in Round 4?

• Pick 163 (Round 5): Darrick Forrest, S, Cincinnati: Forrest was a good run defender on a really good Cincinnati defense. He has ideal athletic measurables, he should contribute immediately on special teams, and he could also see time as an extra safety on early downs against 11 personnel. I like his value here.

• Pick 225 (Round 6): Camaron Cheeseman, LS, Michigan: The Football Team drafted a long snapper in the sixth round. The long snapper is the guy who snaps the ball on field goals and punts. Cheeseman was The Athetic's Dane Brugler's fourth ranked long snapper. Here he is in action:

If the Football Team's games aren't sold out already, they will be soon.

It's noteworthy that the Football Team traded their fifth-round pick in 2022 for this pick, as well as the 240th overall pick. To draft a long snapper. Which again, is the guy who snaps the ball on field goals and punts.

• Pick 246 (Round 7): Shaka Toney, EDGE, Penn State: Toney is an undersized pass rusher with excellent athleticism, and OK-ish production (20 sacks in 40 games) in four years at Penn State. This seems to be a developing theme, in that the Football Team took an athletic edge rusher in Round 7 last year in James Smith-Williams. Throw another one on the pile.

• Pick 258 (Round 7): Dax Milne, WR, BYU: In taking a deep look at Zach Wilson earlier this offseason, I got a good look at Milne, and I liked him, I mean, for a seventh-round pick. He's not fast, and he's not tall, but he has some quickness, route-running savvy, and good hands. He just made a lot of plays (70-1188-8 in 2020) and he reminded me a little of Jeff Maehl back in the day at Oregon, if that does anything for anybody. Remember him?

The Washington Football Team has a nice roster, but as always, no definitive long-term answer at quarterback. That fact will continue to be the elephant in the room with this team, so to speak, until it isn't.

• The Bears, who were picking 20th behind Washington at 19, traded up to draft Justin Fields. It was a steep cost. They gave up a 2022 first-round pick, a 2022 third-round pick, and a 2021 fifth-round pick. Would the Giants have worked out the same deal with Washington? That's probably an unanswerable question, and it's debatable whether it would have been a smart move for the Football Team in the first place. (I'd have done it if given the opportunity.)

• Another probably unanswerable question would be whether Washington would have been able to trade up ahead of the Patriots, who were sitting at 15, to draft Mac Jones. And again, would that have been smart? (I would not have done that, personally.)

• And then there was the run of quarterbacks at the end of Round 2 and the beginning of Round 3, as noted above, when Kyle Trask (pick 64, Buccaneers), Kellen Mond (pick 66, Vikings), and Davis Mills (pick 67, Texans) all came off the board. Will the Football Team regret passing on their choice of one of those guys to fill an immediate need at OT in Cosmi? Time will tell.

They'll remain mired in mediocrity until they find a long-term answer at quarterback. And you know what? "Mediocrity" can win this trash division! Also, "mediocrity" would be a massive step up from the doormat status this franchise has earned over the bulk of the Daniel Snyder era. If this team can repeat as NFC East champs, they will be the first team to do so since the Eagles did it in 2003-2004. Maybe that can help nudge a culture shift forward from a team that expects to lose to one that expects to win?

That's perhaps fine for now, but the Football Team will only have six picks in the 2022 draft, and they'll probably win enough games where they'll be in difficult position to make a power move for a quarterback, should (a) they like one in the draft, or (b) one become available via trade. While football purgatory is lot better than football hell, football purgatory will get old fast.

Not making a move for Fields or Jones, and not drafting Trask, Mond, or Mills are decisions that can all be defended. That said, I find it hard to believe that the team simply just didn't like any of them at all, and I'd have taken a chance on one of them if I were Rivera.

Quarterback discussions aside, their picks were fine, I guess. I liked some, didn't like others, blah blah blah, but for me, it's kind of like, "Wake me up when they get a quarterback." Until then, this team will be easily dismissed.