A look at the Eagles' rookie salary cap numbers, and the money needed to sign them 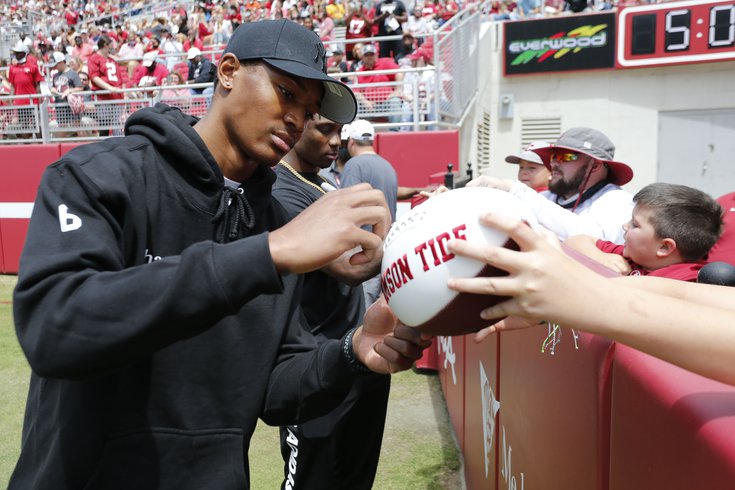 DeVonta Smith will soon be rich.

One of the better changes that came out of the NFL's 2011 Collective Bargaining Agreement was the pre-determined salary cap numbers of all rookie draft picks, which was designed to nearly eliminate rookie holdouts. It has succeeded.

Before the 2021 NFL Draft even began, salary cap numbers were already in place for every draft slot, from pick No. 1, which became Trevor Lawrence, to pick No. 259, Grant Stuard. Below are the Eagles' estimated rookie salary cap numbers for the next four years, using resources from OverTheCap.com.

We'll also use this page as something of a rookie signing tracker, checking off each player who has signed, as it happens. The Eagles have typically signed all of their rookies in one shot, but they trickled in piecemeal last year because of COVID.

During the 2024 offseason, the Eagles will also have the opportunity to exercise a fifth-year option on Smith.

In you add up all the money in the "2021" column, the total estimated rookie pool for the Eagles' draft class is $10,547,006. So will they need roughly $10.5 million in cap space to sign all their rookies? Nah, it doesn't quite work that that. Because the NFL only counts the top 51 earning players on the roster toward the salary cap, only Smith, Dickerson, and Williams will replace players above the "top 51" line of demarcation, so to speak.

As you'll see on OverTheCap's Eagles page, there are a bunch of players at the back end of the top 51 who will each count for $850,000 against the cap this year. In other words, You would take the cap numbers for Smith, Dickerson, and Williams, and subtract $850,000 from each of their 2021 cap amounts, and then add up those three amounts to come up with the extra cap space the Eagles would need to sign their draft picks.

I'll save you the work. It's $3,615,148. The Eagles currently have $5,021,321 in cap space, according to the NFLPA public daily salary cap report, so they have the ability to sign all of their rookie draft picks without clearing further cap space.