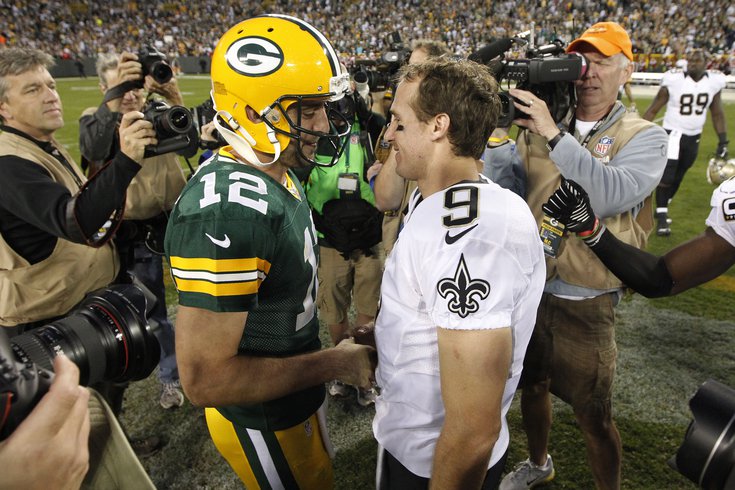 Drew Brees retired, and Aaron Rodgers might soon depart the NFC as well.

Opening point spreads for each of the NFL's 272 regular season games in 2021 (from Westgate) pic.twitter.com/gmKsA8VCAQ

Within it, you'll see that the Lions are underdogs in every single game, except one — a pick'em game at home against the Eagles. They're at least touchdown underdogs in 11(!) games, and in a crappy division, at that.

Detroit has a truly awful roster, led by this guy (obligatory):

Can we please stop putting them on TV on Thanksgiving?

14) Panthers (5-11 in 2020): Sam Darnold will go from one of the worst teams in the NFL in the Jets to a team with arguably the worst projected starting offensive line in the NFC.

Julio Jones’ thoughts on the Falcons and Cowboys. pic.twitter.com/Y9tQDnw2dO

But whatever. Whether Julio Jones knew or didn't know that he was going to be live on the air for that phone call, the fact remains that he said he's out of Atlanta, which is fine for the Falcons if they get a nice compensation package in return, but will obviously set them back in 2021.

12) Giants (6-10 in 2020): I understand that Joe Judge isn't the social media guy behind the Giants' Twitter account, but this does sort of seem to be the sentiment of this organization:

The Giants face both teams that played in the Super Bowl last year, and they’re thinking about the team that went 4-11-1? Lol.

The Giants and Jets are tied for the worst record in the NFL since 2017.

Aaron Rodgers' most significant part of his interview with Kenny Mayne:

A month later, Pace traded third- and fourth-round picks in 2017, as well as a third-round pick in 2018 to move up one spot — from pick No. 3 to pick No. 2 — to take Mitchell Trubisky, leaving DeShaun Watson and Patrick Mahomes to be taken by the Texans and Chiefs.

In 2020, Pace traded a fourth-round pick for Nick Foles, and then gave him a three-year deal worth $24 million, $17 million of which was guaranteed.

Somehow, he kept his job and Bears ownership allowed him to trade the team's first round pick in 2022, along with a couple of other picks, to move up from pick No. 20 to pick No. 11 to take Justin Fields.

I like Fields, but the fact that the Bears do too makes me think I was wrong about him.

9) Saints (12-4 in 2020): A fact that has been noted endlessly about the Saints, dating back to last season, is that they are 8-1 without Drew Brees over the last two seasons. So, you know, the idea is that they'll be fine without him. That record lacks context, since they only beat one team that finished winning record during the season that they beat them. (That was the Seahawks, in 2019.)

In 2020, the Taysom Hill-led Saints went 3-1 against a foursome of teams with a combined record of 17-46-1. Their loss came against the Eagles, who were basically at rock bottom, after having benched Carson Wentz the prior week.

The Saints' defense is good, and will keep them competitive, but Hill is not a legitimate NFL quarterback, and I'm not sure Jameis Winston is either.

8) Football Team (7-9 in 2020): The Football Team should compete for another NFC East banner, which is like winning best gas station hot dog. They have a good roster, but wake me up when they get a long-term answer at quarterback.

6) Vikings (7-9 in 2020): The Vikings' defense got wrecked by injuries in 2020. They'll presumably be back to full strength in 2021, and while I'm not exactly a huge fan of Kirk Cousins, their offense is loaded with weapons at the skill positions, with Dalvin Cook, Adam Thielen, and Justin Jefferson.

If Rodgers leaves, the Vikings have to be considered favorites in the NFC North, right? And if that's the case, the NFC North is probably worse than the NFC East.

5) Cowboys (6-10 in 2020): Even if he is "only" a borderline top 10 quarterback, Dak Prescott is very clearly the best quarterback in the NFC East, and there's a big gap between him and whoever you might think is the second-best guy. And of course, he has a fantastic trio of wide receivers in Amari Cooper, Michael Gallup, and CeeDee Lamb to throw to.

At some point, the Cowboys hype will pick up and people will start calling them Super Bowl contenders for the eleventy billionth straight season. I'm surprised that hasn't really happened yet. They're behind schedule.

UPDATE: No more than an hour after we published this, the floodgates opened.

At this time last year, the Cowboys were considered a contender. But following the Dak Prescott extension, it’s been a fairly low-key offseason in Dallas.

So with Prescott paid and Year 2 of the Mike McCarthy era about to begin, what *are* the Cowboys?https://t.co/kNh6txzqf9

All is right in the world again.

4) 49ers (6-10 in 2020): The 49ers landing at fourth in the hierarchy is merely a testament to how terrible the NFC is. Normally you'd have teams like the Packers and Saints in the top 5, but with Brees' retirement and Rodgers trying to force his way out of Green Bay, the Saints and Packers are out of the way (if indeed Rodgers gets traded). That leaves teams like the 49ers and Cowboys in the top 5, even though both of them have major warts.

Back in February, we took a close look at Trey Lance, who is unquestionably gifted physically, but who is going to need time to iron out many of the kinks in his game, most notably his mechanics and his accuracy. He has the chance to be awesome, but it's more likely for that to happen over time, as opposed to immediately in 2021.

Jimmy Garoppolo stinks, and San Francisco knows it, or they wouldn't have traded what they did to get Lance. As such, the Niners could very well start Lance from Day 1, and they probably should, because why not? Let him sink or swim, and find out what you've got. But there will be growing pains, and it'll be difficult winning the only good division in the NFC.

They did lose defensive coordinator Brandon Staley to the Chargers, so that's concerning, but they still have the personnel to have one of the best defenses in the league again in 2021.

The biggest thing holding the Rams up was Jared Goff, so they shipped him out and brought in Matthew Stafford, who will finally have a chance to play on a team with a complete roster.