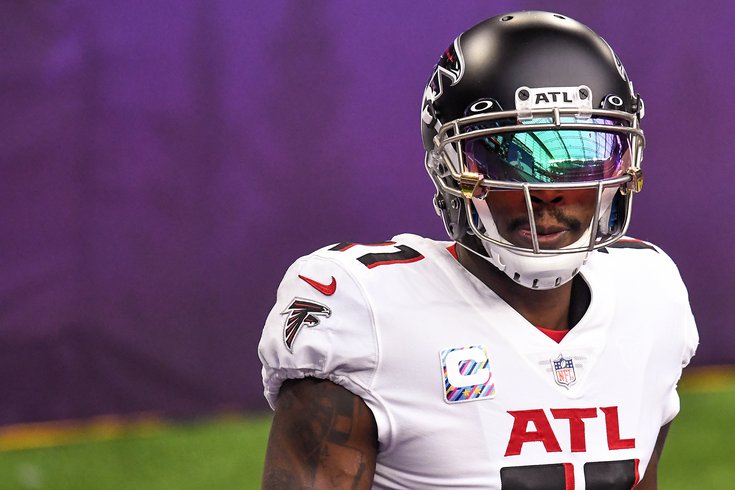 Any time a star player becomes available via trade or as a free agent, the Eagles are always, ALWAYS among the teams listed as potential landing spots. It seems to be a collection of three or four teams that actually make sense followed by a nice "and the Eagles" for good measure. And we can't help but talk ourselves into the reasons why, you know what, the Eagles actually could trade for this guy. Or they could convince this free agent to sign here, ignoring any semblance of common sense because it feels better to believe in something.

But simply playing the law of averages and perhaps allowing a little common sense to prevail, it's obvious there's no possible way that the Eagles actually stand a legitimate chance at landing all of these guys. Some? Sure, but this is getting ridiculous.

We'll get into the why's of this phenomenon in a bit, but first, there's the reason we're bringing this up again today — yes, again, as I've clearly written about the "And The Eagles" phenomenon in the past — and that is the news that Julio Jones broke himself on FS1's "Undisputed" on Monday morning, when he answered a phone call from Shannon Sharpe that he may or may not have known was also being broadcast live on national television.

Very bluntly the Falcons wideout said that he's "out of" Atlanta.

"Oh no, I'm outta there man." - Julio Jones to Shannon Sharpe on playing for the Falcons, while on speakerphone on national television ..... pic.twitter.com/t86PgAOqS9

Rumors had been swirling that the star veteran receiver wanted out of Atlanta — apparently Jones first requested a trade months ago — and now everyone knows that's true, meaning the speculation about where he'll play in 2021 is only going to increase in the coming days and weeks as it now sounds like the Falcons will have little choice but to trade him, even if he hurt his own trade value by publicly expressing his desire to move on.

Falcons prefer not to trade Julio Jones in the NFC, but would do so for the right price. But now, with Jones wanting out of Atlanta, they are looking for the best value in either conference. https://t.co/D59vq0x9jz

In this non-stop news cycle, it didn't even take 30 minutes for football writers to begin speculating where he might wind up next. In fact, that's been going on for days already — and it's not just the writers, it's the sportsbooks as well.

On Friday afternoon, well before Jones publicly said he wants out, I received emails from a pair of betting sites, both of which had already put together odds of where Jones will play next if he is indeed traded. Interestingly enough, both listed the Eagles among the top dozen or so teams with a chance at landing Jones. And both had the Birds at +1000. They certainly weren't the favorites, but they were listed there nonetheless.

And following Jones' comments on "Undisputed," those odds were given a bit of validation from CBS Sports' Jason La Canfora, who broke down six teams in the running to land the unhappy receiver. Those included the five odds-on favorites — the Ravens, 49ers, Patriots, Chargers and Titans — and the Eagles.

If you are looking for a dark horse outside of these teams, I have seen the Eagles around 10-1, and you can never count them out of this kind of a move. That division has no monster team, and while they are kinda retooling under a rookie head coach, they are always eager to make trades to add talent. Yes, they just drafted an Alabama WR in the first round, but the owner has traditionally been a big spender and they have a massive draft haul already assembled over the next few years, making it easier to part with in a situation like this.  [cbssports.com]

Earlier on Monday, Bill Barnwell of ESPN wrote about a potential trade for Jones and what teams might actually be suitors, noting that most of the teams that had the draft capital to trade for Jones, which certainly includes the Eagles and their potential three first-round picks next year, feature QBs still on rookie contracts. But, Barnwell also made sure to note that the Birds specifically can't afford the two-time All-Pro, who will count for $23 million against the cap in 2021 and just over $19 million per year in 2022 and 2023, according to OverTheCap.

But that's assuming the Eagles only trade away picks and not a player who might free up some (albeit not all) of that space. Currently, the Eagles have just over $4 million of cap space with which to work. If only they had some sort of player who had a sizeable cap hit that they were looking to move on from... Oh, wait, they have Zach Ertz, but that's a different story for a different day. Why? Because it would be putting the cart miles ahead of the horse.

Making Jones' contract fit or finding the right trade pieces to get a deal done would assume that, 1. The Eagles are actually in on a potential trade for Jones and, 2. Jones would even want to play here.

Sure, traded players don't always get to say where they wind up, but Jones has some pull, and if he doesn't go to a team he wants, what's to stop him from refusing to play for his new team? And if you listened to that full clip from "Undisputed," you clearly heard Jones say that he wanted to go to a winner (which might be why he was so quick to discount a trade to the Cowboys).

Who around the National Football League considers the Eagles a winner? They're coming off a terrible season, have a first-time coach, an unproven quarterback and hoping to begin the process of writing the ship. They may some day be a winner, but they are certainly not right now. And Jones, like the rest of the football world, knows this.

In other words, it doesn't seem like it makes much sense from the Eagles perspective, mainly because of their cap situation because they could certainly use the upgrade at receiver even after taking them in the first round of back-to-back drafts, and it doesn't seem to make sense from Jones perspective as he continues to chase that elusive Super Bowl ring. Yet the Eagles continue to pop up in regards to Jones (and other trade candidates/free agents whenever they become available).

But why? Well, it's a pretty basic two-part answer.

The first part is Howie Roseman, who is not only an aggressive general manager in the deals he actually pulls off, but by all accounts he's also busy on the phones and reportedly likes to make calls on as many available players as possible (which is 100% the right thing to do). It can't hurt, right? Additionally, as we've also mentioned in this space before, Roseman is a master at manipulating the media, and many times you can bet that the reason the Eagles are being linked to a player is because the GM wants them to be, whether or not he actually has any intentions of making the move. This is also the smart way to play it, even if it is super annoying to those who cover and follow the team. By doing this, Roseman keeps rival GMs guessing about what moves they're looking to make and can appear to be in on almost every player.

Then there's the other side of it, the media and the fans. Eagles fans are rabid, and consume content at an astounding pace. Therefore, the Eagles contingent of media is among the biggest in the country (for any sport), and national outlets, sportsbooks, whatever, all know this. By linking a player to the Eagles, you're guaranteed to increase your traffic. Philly sites will pick up your report because they know it will do numbers. Philly fans will then flock to your site for more info and to read the full story, then they'll come back to another local site that has a different take on the original report before checking out an emergency podcast that compares the different takes. Then they'll compare that to what their favorite local radio host has to say the next morning. Rinse. Repeat.

We're all party to it. We all benefit. And we're all guilty.