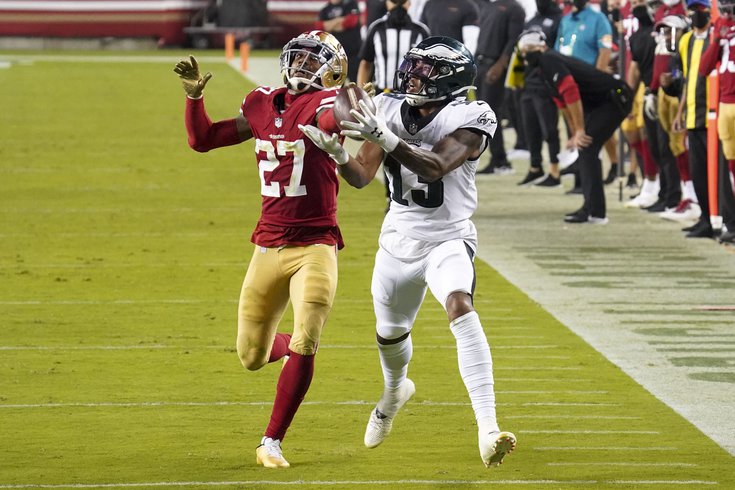 During the offseason, we'll be taking a look at a handful of players who are either new to the Philadelphia Eagles, or are already with the team but we perhaps don't know a lot about them just yet. Today we'll take a look at Travis Fulgham.

The Eagles claimed Fulgham off of waivers from the Packers late in 2020 training camp. They had actually given him a "starter" grade (that's a good grade on the Eagles' grading scale) leading up to the 2019 NFL Draft, kept tabs on him thereafter, and claimed him when opportunity met need.

Fulgham showed something in those final practices leading up to the 2020 season, and he became a priority for the Eagles to retain on the practice squad. He remained on the practice squad for the first three games of the season, continued to perform in practice every day, and when the Eagles suffered a slew of injuries to their receiving corps, Fulgham was called up to the 53-man roster.

He started against the 49ers Week 4, and hauled in a game-winning 42-yard TD reception. He then proceeded to put up big numbers in his next four games against the Steelers, Ravens, Giants, and Cowboys. Fulgham actually led the league in receiving during that five-game stretch, and it looked like the Eagles had lucked their way into a legitimate long-term starting wide receiver.

And then, just as quickly he emerged from out of nowhere, Fulgham went quiet. The Eagles had their bye week after that five-game stretch, and on the other side of the bye, Fulgham would only catch 9 more passes for 104 yards and 0 TDs the rest of the season.

A look at his week-by-week snap counts, and stats:

So why did Fulgham lose snaps? Wide receiver coach Aaron Moorehead was asked precisely that earlier in the week.

"The [five-game stretch] showed me a lot," Moorehead said. "It showed everybody a lot. With that [success], it also goes with the understanding that now defenses are going to start scheming toward you to stop you. And that for a young player sometimes, him understanding that, it took a little bit."

"And then, he got nicked up a little bit, and didn’t complain, but he had to play through it. As the season got going, it wore on him a little bit.

"The guy has it. We saw it. Right? We all saw it. It’s in there. And I’m looking forward to seeing Travis and what he does this year. I think that as you saw him progress last year, he kind of hit a little bit of a rut last year, and got out of it.

"If Travis can continue to grow physically, mentally, all those things, he can get himself to be that guy again. And if he does, to be honest, our receiving corps, with Jalen Reagor, and DeVonta Smith, Greg Ward, we can be really, really, really good."

"It was impeccable timing, to say the least," said Moorehead. "I’ve been a guy where the best guy is going to play. I don’t care if it’s Travis Fulgham, who showed up here the last week of training camp, or it’s Alshon or any other guy. It was the best guy who was going to play.

"Football is a meritocracy. You play what you earn, and that’s every player on the field. At the same time, Alshon was coming back from injury. He had been practicing for three or four weeks, and just hadn’t had a chance to play very much. As he started getting healthy, there was ability to put him and Travis out there together, and there was ability to put them out there separately, and it was important for our football team to have the ability to do that.

"I don’t want to say it stunted Travis. I would say it opened his eyes, like, 'Hey look, you better come out here and practice every day like your job is on the line or else someone else can take your job.' As a young player, a second-year player in the league, he was able to take that lesson. I hope he takes it and runs with it in Year 3."

The following is a video of all of Fulgham's targets on the season.

• Speed: Fulgham ran a 4.58 at the 2019 NFL Combine. He is obviously not a blazer, but was a savvy enough route runner to make plays down the field.

• Hands: I would say that Fulgham's hands are probably his biggest issue as a player. He nearly dropped an easy catch on the play in which he stayed alive for a scrambling Wentz. The ball almost fell to the ground, but he was able to recover and make the catch. And if you look at his TD reception against the Ravens, the ball actually goes right through his hands, but he was lucky that the ball sort of settled in his bread basket after it hit his body.

On the season, we only had him down for two definitive drops, though there were other difficult catches that could have been made.

• Run after catch: On his TD against the 49ers, he did a nice job staying in bounds and finishing with a score after making the catch, despite the DB trying to angle him out of bounds. Against the Steelers, after extending for a catch over the middle, he took a hit from Minkah Fitzpatrick, but stayed on his feet and kept running. While I don't think he's a guy who can catch a slant and run away from the defense for an 80-yard score, he showed a no-nonsense style of running once he had the ball in his hands. He was typically able to get every bit of yardage that he was physically capable of, without dancing or giving himself up.

• Route running: He didn't show a lot of shake, but he got to where he needed to be. He seemed aware of where to sit down in zone coverage, maximizing spacing in between defenders, and squaring his body to give the QB a big target. He has also did a nice job staying alive for his QB when he was in scramble mode. Additionally, he runs good routes even when the ball isn't coming his way. For example, he ran a nice pick route on 4th and 4 against the 49ers, getting John Hightower open and creating an easy conversion.

• Versatility: He lined up and caught passes from all over the formation. He lined up inside, outside, and even as something of an H-back in the backfield, which will appeal to Nick Sirianni, who wants his receivers to be able to play everywhere. The Eagles can experiment with matchups because of that versatility. For example, against the Steelers, Fulgham lined up in the slot and 5'9 Mike Hilton couldn't cover him.

• Contested catches: The Steelers game was the best example of Fulgham using his big body to his advantage. He went up high for a pair of catches near the sidelines vs. Hilton as well as Steven Nelson. He had a size advantage, and used it. For five weeks he was essentially what the Eagles hoped J.J. Arcega-Whiteside would be.

In my opinion, Fulgham is one of the three most talented receivers on the roster, along with DeVonta Smith and Jalen Reagor. In OTAs, the first-team receivers were Smith, Reagor, and Ward, with Fulgham playing on the outside with the second team unit, so it would appear that they're making him earn his way into the starting lineup.