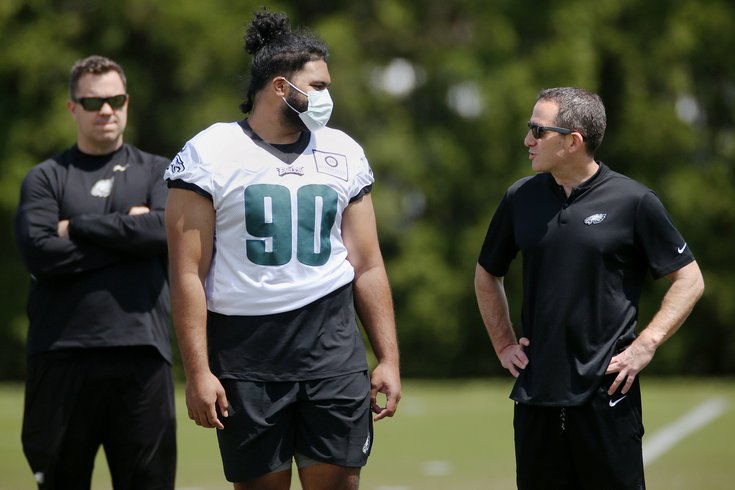 Marlon Tuipulotu, before he had to give up No. 90.

During this semi-dead period of the offseason, we'll be comparing each of the Philadelphia Eagles' rookies to current or former NFL players. Today we'll find a comp for sixth-round defensive tackle Marlon Tuipulotu.

After selecting DT Milton Williams in the third round, the Eagles continued to add to their DT depth with their selection of Tuipulotu, a shorter 6'2, 317-pound nose tackle type. Over the last three seasons, in 29 games, Tuipulotu had 102 tackles, 15 for loss, and 8.5 sacks. A highlight reel:

Tuipulotu is a good run defender, and his value will likely be on early downs. As a pass rusher, even if he's not getting to the quarterback, he could be effective pushing the pocket and giving the edge rushers more opportunities to get home because the passer can't step up into the pocket. He might even play more early on in his career than Williams, the third-rounder.

Dane Brugler of The Athletic had Tuipulotu as his 69th overall prospect. Daniel Jeremiah of NFL Network had him at 126th. ProFootballFocus had him at 130th. At pick No. 189, Tuipulotu was a nice late-round value.

Tuipulotu reminds me of Kelly Gregg, another sixth-rounder who played in the NFL for 11 years, mostly with the Ravens, racking up 574 tackles, and also contributing 20.5 sacks (about 2 per season). You want to see a Kelly Gregg highlight reel from his time in college at Oklahoma? Of course you do!

As you can see from each players' highlight reels, they were both very good at shedding blocks, which can be partly attributed to their wrestling backgrounds. In high school, Gregg was a three-time state wresting champion (Oklahoma 1993-1995), while Tuipulotu was a high school state wrestling champion as well (Oregon, 2016).

"The only reason I did wrestling back in high school was to help me become a better football player," Tuipulotu explained. "Just understanding the body and how to maneuver it in certain positions to your advantage, and then it helps with having violent hands, and good feet, being able to stay balanced in uncomfortable situations."

From a measurables standpoint, Tuipulotu and Gregg are very similar there as well. Gregg weighed in at 301 pounds at the Combine, but he played in the NFL at around 320, similar to Tuipulotu at 317. Their athletic measurables:

As you can see, Tuipulotu and Gregg aren't going to beat many other football players in a sprint, but their power and wrestling backgrounds make/made them effective in the trenches.