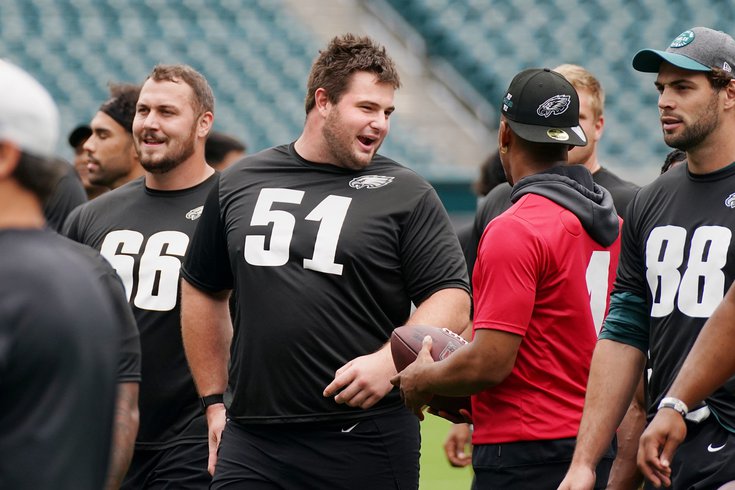 During this semi-dead period of the offseason, we'll be comparing each of the Eagles' rookies to current NFL players. Earlier in the week we started with DeVonta Smith. Today we'll take a look at second-round interior offensive lineman Landon Dickerson.

Dickerson is an abnormality in two ways:

On the size front, a look at Dickerson's spider chart at the center position:

One of the biggest starting centers in the NFL is Ryan Jensen of the Buccaneers, who is two inches shorter than Dickerson at 6'4, and his lighted weight is 13 pounds lighter, at 320. Like Dickerson, Jensen has some positional versatility, and it's maybe notable that the Ravens drafted Jensen in the sixth round of the 2013 NFL Draft, when Andy Weidl was a part of Baltimore's scouting department.

If you watched NFL playoff football this past season, Jensen was pretty hard to miss. He was the guy with the long red hair who kept getting into fights with opposing defenders. As you can see in the following highlight reel (from his days in Baltimore), Jensen is big, deceptively athletic, and very nasty.

Dickerson's play style and intensity is reminiscent of Jensen's. The following is a great video breakdown of Dickerson's game from my friend Fran Duffy. I can't recall Fran laughing very often during these breakdowns, but he does several times here, as Dickerson is able to put defenders on the ground. This is probably worth watching in full:

Anyway, the similarities in terms of play style, and ability to execute blocks in the run game are there between Jensen and Dickerson. However, Dickerson will likely be a better pass protector out of the box than Jensen was in 2020. ProFootballFocus had Jensen down for four sacks allowed, and when I watched all of Tom Brady's sacks in 2020 (there were only 21 of them), I would agree that four were on Jensen, a very high number for a center, especially when you're playing in front of a quarterback who knows how to avoid sacks like Brady.

According to his bio on Alabama's website, Dickerson did not allow any sacks (727 total snaps) in 2020, and he only allowed one sack and four QB hurries in 2019.

If Dickerson can stay healthy — and certainly, that is a big "if" — Jensen is his floor.