What they're saying: Is it time for the Eagles to just release Zach Ertz?

Plus, where does Nick Sirianni rank among current coaches? And which Eagles trade was on list of NFL's worst since 2000? 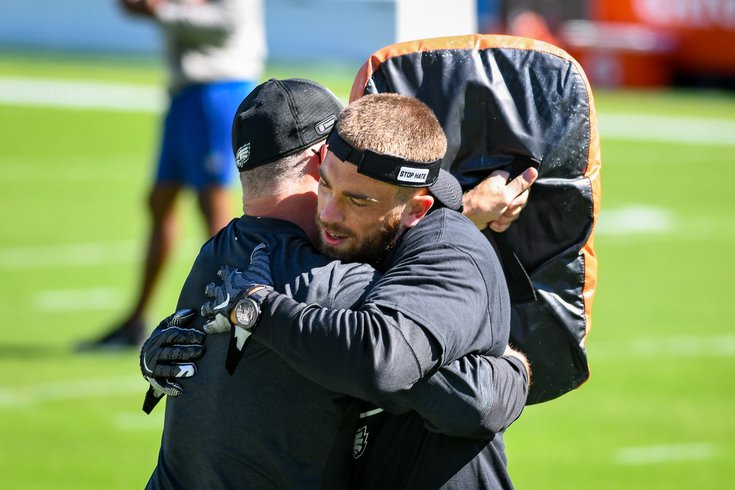 Zach Ertz hugs an Eagles coach prior to a game.

We're officially one month from the start of Eagles training camp, and to the surprise of many, tight end Zach Ertz remains on the roster. But when the team reports to the NovaCare Complex in late July, Ertz almost certainly won't be there.

There's been talk since before the season even ended that 2020 could be Ertz's final year in Philly given his contract situation and the emergence of Dallas Goedert as a top 10 player at the position. In fact, talk of Ertz being on his way out started during the 2019 season when Ertz was reportedly looking for but failed to get a contract extension with the Eagles, despite him being one of the best players on the team and a franchise great.

The belief that Ertz would be dealt was further solidified this offseason when the team decided to blow it all up, firing coach Doug Pederson and trading quarterback Carson Wentz to the Colts. Some thought Ertz would follow his friend to Indy to be reunited with Frank Reich. Others thought there might be a few other teams interested in acquiring a player of Ertz' caliber who, while coming off a down (injury-plagued) year on a dysfunctional team, is still the kind of tight end almost any team can benefit from having on their roster.

But with Ertz owed over $8 million this season on the final year of his contract, perhaps some teams have been hesitant to pay that price — not to mention the reportedly high asking price from Howie Roseman and the Eagles. More likely, however, those teams know that if they just wait out the Eagles, they might have a chance to pick up Ertz a discount, all while not having to give up a draft pick in the process.

No matter how this plays out, one thing seems certain: unless the Eagles suddenly do an about-face and come to an agreement with their tight end on his contract situation, Ertz won't be on the field next month when training camp opens. He's already skipped the team's spring workouts, and according to Jeff McLane, he won't be reporting until his contract issue is resolved.

But with camp now right around the corner — and the Eagles possibly needing some of the salary cap relief they'll get from moving on from Ertz to address other areas of need — some are beginning to wonder if it's simply time to release Ertz and move on.

Time to say goodbye to Ertz?

Over at NBC Sports Philadelphia, Reuben Frank wrote about Ertz saga and why the Eagles should simply cut the 30-year-old tight end loose — assuming they're unable to come to some sort of agreement and restructure that contract.

It’s time to get this resolved. Time to figure out an end game. Time to grant Ertz his freedom, if that’s what he truly wants.

Now, I still don’t see why the Eagles and Ertz can’t find some common ground that would keep him in Philly for the final year of his contract. I’m a big Dallas Goedert fan. He’s already a top-10 tight end . And Richard Rodgers is a nice player as well. But there’s no question this is a better team with Ertz on the field. As disappointing as last year was for him, Ertz can still play, and what better for a young, inexperienced quarterback than a tight end who’s still as good as anybody moving the chains on 3rd-and-5?

The Eagles have been clear about wanting Ertz back, and Ertz has been clear about how much he loves the city. They should be able to work something out. Not to mention that if he stays here, he gets $8 million. If he's released, that $8 million evaporates and he's not getting anywhere close to it wherever he lands. So both sides have something to gain by getting this figured out.

If not? If Ertz truly feels so betrayed by the Eagles that he just can't wear that No. 86 jersey again? Then it’s time.

Let him go. Stop waiting for an offer that probably won’t even come.  [nbcsports.com]

It's also worth noting that at this point, with the tearful press conference and those postgame shots of Ertz lingering on the field following the last game of the season, it might be too late to try to get something done. Ertz could (and arguably should) feel slighted that it's even gotten to this point, and from a simple pride standpoint, he could opt to move on rather than trying to come back at a discount. Let's just hope this doesn't get any uglier before it gets resolved.

Running out of options

Nick Fierro of the Allentown Morning Call also thinks it's time for the Eagles to release Ertz. But not necessarily because it's the right thing to do. They simply might not have any other choice at this point.

But this one has been difficult to finalize because of Ertz’s decline and recent injury history, his enormous salary cap hit for 2021 ($12.7 million), age (30) and the Eagles’ refusal to trade him for what they consider to be unfair compensation.

Action was expected long ago, and now the clock is ticking, because starting training camp next month with Ertz still on the roster is not the way the Eagles want to proceed under new coach Nick Sirianni and mostly new staff. They can’t afford a contract dispute to distract a team that needs all the work it can get before being ready to play real games.

This poker game the Eagles are playing against the rest of the league has to end before long. The Eagles keep hoping someone will blink and show their hand. But the way things are looking, they will have to fold by releasing Ertz and putting the situation behind them.  [mcall.com]

ESPN's Bill Barnwell took a look at 16 teams who have a glaring depth issue at a major position. And if you've been following the Eagles offseason at all, you shouldn't be surprised to see them make the list for their cornerback woes.

At this point, the Eagles have three options: 1) Address the position by bringing in someone (perhaps a Steven Nelson); 2) Do nothing and get lucky with Zech McPhearson or Michael Jaquet; 3) Do nothing and make a lot of writers who were complaining about the team's lack of CB depth look really smart.

With some of the WR groups they'll have to go up against this year in their own division, let alone the rest of the league, just having one starter-quality CB on the outside could be disastrous.

Cornerback is a little different since a team will use two or three corners on any given snap, but let's stick in the NFC East and look at a team that got what it wanted and might end up regretting it. After years of skimping on cornerbacks and emphasizing depth over top-level talent, the Eagles went out to get the No. 1 corner that fans had been clamoring for last offseason and traded for Slay, who signed a three-year extension in the process. Slay was inconsistent in his first season with the Eagles, who fell apart around the talented corner.

Now, in part because of how much it's paying Slay, this team is perilously thin at corner. Hybrid defender Avonte Maddox might start in the slot, but the depth chart at cornerback around Slay is one of the weakest in the league. The Eagles are looking at replacement-level corners, practice-squad guys and rookie fourth-round pick McPhearson to compete for jobs on the outside. Good corners can come out of nowhere sometimes, but teams don't want to be counting on stumbling upon a useful player before the season even begins.

If Slay is a shutdown corner in his second campaign in Philly, new defensive coordinator Jonathan Gannon will have to worry about one side of the field on every snap. If Slay isn't impressive or gets hurt, there might be no place for these corners to hide, particularly in a division with wideouts such as Amari Cooper, Kenny Golladay and Terry McLaurin.  [espn.com]

Where does Sirianni rank?

It's hard to rank coaches who haven't even coached a game yet, but that's what Dalton Miller of Pro Football Network did. And, rightfully, he had the seven rookie head coaches taking up the last seven spots on his list.

So where was Sirianni? Right in the middle (fourth) of that group of first year coaches and 29th overall.

For Eagles fans, none of that should matter. They only thing they'll be hoping is that when this same last comes out next year after a season of seeing what he can do, Sirianni will be trending in the right direction.

It was thought that Nick Sirianni was hired to help fix Carson Wentz, but they instead sent the QB to Indianapolis in a trade. Still, Sirianni did create some impressive offensive game plans in his time with the Colts. Like many new head coaching hires, this one is for developing the quarterback. The Eagles are hoping Sirianni can do just that with Jalen Hurts.  [profootballnetwork.com]

Over at Bleacher Report, David Kenyon ranked the seven worst trades since 2000. And the Eagles actually found themselves on the list twice, once on the right side and once very much on the wrong side. First, there was the McNabb-to-Washington trade in which the Birds got a second- and third-round pick for their franchise QB. McNabb never panned out in D.C. and started just 13 games, throwing 14 TDs and 15 interceptions before they flipped him for Alfred Morris. That Eagles-Washington trade came in at sixth on this list.

But we also saw the bad side of Philly trades in this one, with the Eagles coming in at third for the LeSean McCoy-Kiko Alonso trade, a move that still leaves most Philly fans scratching their heads.

Shortly after becoming Philadelphia's head of football operations in 2015, Chip Kelly made a bizarre decision. Hindsight does the former Eagles head coach no favors, either.

Kelly sent All-Pro running back LeSean McCoy to the Buffalo Bills for linebacker Kiko Alonso. McCoy had 3,620 scrimmage yards in the prior two years; Alonso, who Kelly coached at Oregon, had missed the previous season with an ACL injury.

McCoy played three seasons with the Bills and helped the organization snap an 18-year postseason drought. Alonso didn't win a starting job in Philly, reinjured his knee and went to the Miami Dolphins in a trade the following offseason.

And the Eagles fired Kelly in December 2015.  [bleacherreport.com]