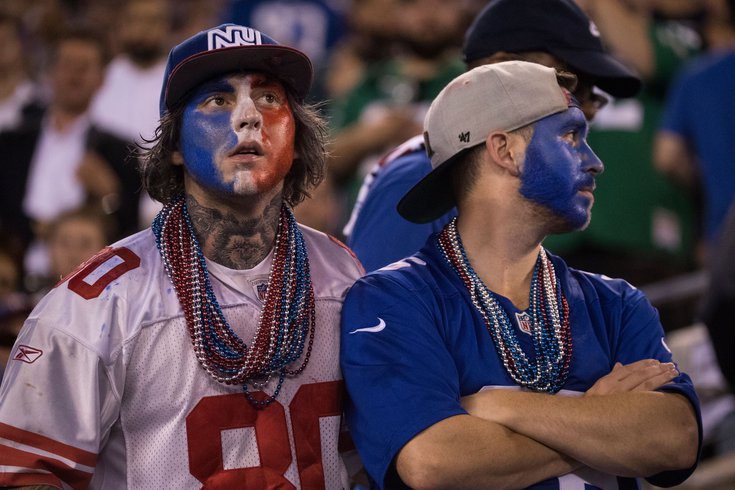 It must be a sad half hour cleaning off face paint after yet another loss.

This past week, all week long, we published 10 reasons each of the NFC East teams will be a dumpster fire in 2021, in which we pointed out the biggest flaws of each team heading into the season. In case you missed it, you can catch up here:

The series drew a lot of angry emails, as it does every year. The whiniest of the bunch were Giants fans, by far. In fact, I would rank whiny levels like so, with analysis:

Anyway, we'll post some of the better emails here for your enjoyment. I remain stunned by the level of illiteracy in this country. We'll leave grammar and spelling errors unedited. In other words, these emails appear exactly as they were received, with the exception of redacting some naughty words:

"Dude sounds to me like Philly needs a new voice because you sound old dumb and boring. Like hey genius you’re passing judgment on Jalen Hurts for his numbers? Even though he was thrown in the fire to face a red hot saints defense.And minus Kelce was the only starter he had protecting him. PFF ranked Brooks the best guard in NFL. That year he was coming back from an injury.Since he didn’t play one snap with hurts or one snap last year.How can you the so called Philly Voice sit there seriously believe the garbage you are writing.Real situations will always expose fake people. It’s the hard times that mold us into who we are.I expect Dallas fans and Giant fans to be really thinking what they saw last year is how it’s gonna look this year those “old guy’s “ that are coming back healthy and pissed off. Pro bowl caliber line put them in front of hurts and watch what happens. He’s gonna be the new right handed version of mike Vick. I expected this trash to come from our over confident rivals not someone who claims to be our voice. What a joke. Hang this up because maybe because trust me you’ll remember it later."

#JimmyRebuttal: I have two rebuttals here:

#JimmyRebuttal: I can respect this form of hate mail. It's quick, to the point, and it leaves me with the feeling that you didn't spend your whole day heated over what I wrote. Kudos, ma'am.

"I was reading your column about the Cowboys repeating last season. The fact that you think Zek is worn out shows how little you have been paying attention. Who has been calling the plays since his decline? He also lost weight coming in to his lock out season. I think if Dak and the Cowboys hopes for post season this year rely completely on Zek. Who did Tampa bay have a wr last year? Wasn’t it your locker room plagued group of No-Nos. Dak Prescott is not the second best qb in the league he might be the 9th but not even close to top 5. The Cowboys offensive line is not even close to what they were and it would be disrespectful to say it is considering how there best lineman was forced to retire! The Cowboys at the worst for the past 23 yrs is stil more interesting than the Eagles entire franchise. They traded away the qb that got the the ring and that’s what plagued Wentz. It’s the fact his back up won the Super Bowl while he watched. Elliot is top 2 rb in tbe league but the replacement of coordinators has changed his role they been pass first. They actually have 2 good running backs and his elliots back up is going to have a break out season. I wish Dak never came to Dallas and Jones retired as gm 20 years ago. It’s a shame but I think Jerry will pass before the Cowboys win another Super Bowl because this dude Prescott don’t have it in him. He’s a choker much worse then Romo. I wish Romo had the help this over paid Prescott has, last time Romo had a rb with a o line they got robbed in Green Bay but that was his best season. What about your eagles man can they draft one right? Jesus all those wasted draft picks over the years makes Andy look like a god."

#JimmyRebuttal: Good Lord, this guy was just all over the map. Also, I've never seen anyone spell Zeke "Zek," but he did it twice, so it wasn't just a typo.

When I first read this, my first thought was that English was a second or third language, but he had an extremely American-sounding name.

"10 reasons why your career as a journalist is over. Number 1. Your team was worse than Dallas last year. 2 philly sucks!

#JimmyRebuttal: It was a fun ride, guys.

"So your telling me the eagles will be better then Washington. Are you kidding me. The eagles are freaking terrible. New coach unproven. Jalen unproven. Defensive line is what you would call senior citizens. And by the way the secondary is trash.

"I know you have to rite article.. but can you at least be realistic. Thank you and good day. Httr"

#JimmyRebuttal: No, I do not think the Eagles will be better "then" Washington, and there's nothing that even remotely hinted at that. But whatever. I included this email because it's funny to me that the first impulse of many fans (and people in general for that matter) is to attack something they think will hit home, rather than rebut the actual points made.

"You call the Boys a dumpster fire?? Talk about pot to the kettle. The Sheagles have a horrible team with a below average Qb, no running game, horrible Wrs and no O line. Their secondary is horrific. They will be lucky to win 4 games this year!!!!

#JimmyRebuttal: I replied to this person asking him to explain the "Sheagles" insult. Is that a slight of some kind? That being a female is a bad thing? I know a lot of females, including my mother, sister, daughter, and girlfriend. And more! In my 44 years walking this planet, women are better than men, and it's not really close.

"One sided article  no pro or cons"

"Go fk your self, the Eagle's have done 0 for ever ass h. The Cowboy's own your punk ass for atleast a half a Century. The Eagle's Suc, and so do you!!!!!"

#JimmyRebuttal: I responded to this person, "You're illiterate." He then responded, "Your comeback sucks, just like your punkass beagles. Perhaps you have better stats or some other fake BS to back up your weak ass story, Cowboys will take the East and sweep your Beagles."

He tried to clean up his grammar and spelling in his second email after I called him illiterate, lol.

#JimmyRebuttal: The "GO COWBOYS" at the end made me legit lol.

"Philly journalists are cry babies losers that can't come up with 10 reasons their own team is worth writing about!"

#JimmyRebuttal: I read "cry babies losers" in the voice of the guy in Fargo who says, "We stop at pancakes house."

"I have no respect for you. Guess you felt you had to give us your statistics about America's team. It is bad enough The United States is not united. Let us hold onto what we believe in. Yes we may be old but our pride is strong and really, a true fan will still believe in Dallas each and every year and each game. I am friends with the Mahomes family yet my team is still Cowboys. I didn't run for the winning team. DC4L you jerk!"

#JimmyRebuttal: I love that this person felt the need to add that they are "friends with the Mahomes family."

"This coming from a Philly guy don't worry about the Giants"

#JimmyRebuttal: One of the fascinating things I've learned about hate mail over the years is that people will type the entirety of their message in the subject line instead of using the body of the email, which this guy did here.

"I’m a realistic Cowboys fan since 1967 and enjoyed your article. Thought you might like to read some of these blunders from Coach McCarthy last year. Sorry they hired him. Not sure why he hasn’t received more heat for these"

#JimmyRebuttal: My perception was that McCarthy didn't make many egregious coaching errors in his first year in Dallas, which this fan disagreed with. He attached a Word document with a list of what he felt were game management mistakes by McCarthy. He called it "McCarthy's McConfusion," which I'll post here:

"McCarthy’s McConfusion – Be careful what we wish for, eh?

"Started in the opener in Los Angeles, when – trailing 20-17 in the fourth quarter – he eschewed a game-tying field goal for a failed fourth-and-three pass.

"Against the Falcons in Week 2, he tried an ill-timed two-point conversion and two fake punts, one relying on a right-handed pass from a left-footed kicker.

"In Week 6 against the Cardinals, McCarthy ordered a 58-yard field goal attempt … trailing by 25.

"Against the undefeated Steelers in Week 9, he passed on a fourth-and-inches at Pittsburgh’s 22 for a field goal and a 19-9 lead that would eventually deteriorate into a 24-19 loss.

"On Thanksgiving against the WFT, he approved a pass on fourth-and-one at the Cowboys’ 34 in a 10-10 game, then green-lighted a reverse fake punt on fourth-and-10 from their own 24 down only four points with 13 minutes remaining. The Cowboys were outscored after the inexplicable call, 21-0, and the loss ultimately cost them the NFC East to 7-9 Washington.

"And in a low-scoring brawl against the Giants, the Cowboys scored to pull within 20-15 only to have their head coach kick the extra point and, ultimately, need a touchdown on their final drive instead of a field goal."

This is my new favorite Cowboys fan of all time.