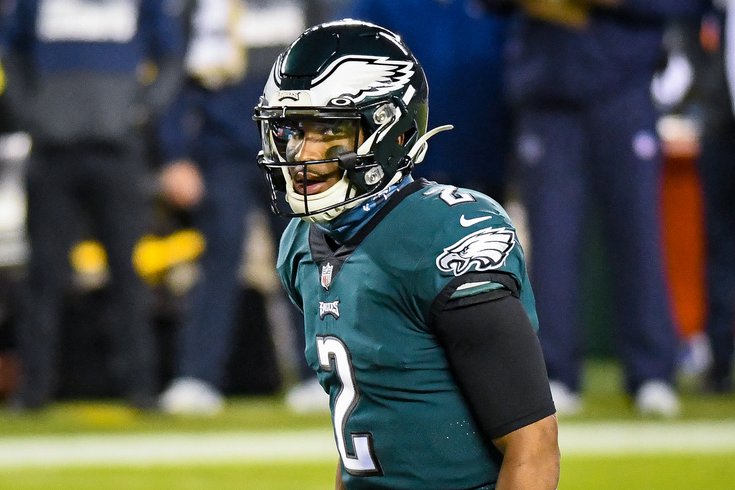 This past week, we published our dumpster fire series, which didn't leave me with much time to write about other Eagles news. Thankfully (for me, anyway), not much happened. Anyway, let's get to the stuff we missed.

For the last half decade-plus, the NFL has had a dumb rule that each team can only have one helmet color. As such, the Philadelphia Eagles have not been able to wear their Kelly green jerseys, because they would look weird with a midnight green helmet. There's a better explanation of all that nonsense from the 2019 owners meetings, if you're interested in learning more.

On Thursday, Adam Schefter tweeted that alternate helmets could return as soon as 2022.

NFL approved alternate helmets today for teams wearing throwback uniforms starting in 2022, per league sources. This opens the door to the defending world-champion Bucs wearing the old white helmets with the orange swashbuckling Buccaneer as early as 2022.

The Eagles, however, will stick with the black alternate jerseys through at least 2022, according to Rob Tornoe of the Inquirer.

The Eagles have already submitted their black jersey as their alternate uniform in 2022, according to team sources. So the soonest fans could see the Birds in kelly green would be 2023. https://t.co/X4TApfHq5K

What a stupid saga.

On Wednesday, Chris Simms of NBC Sports released a ranking of his top 40 quarterbacks in the NFL. Jalen Hurts didn't even make the list.

The Top 40 QB is done. Putting Josh Allen over Aaron Rodgers was the hardest call of the whole list for me. I talk through the Top 4 here:https://t.co/oyfwxglhiL

Some took issue with Simms' inclusion of all five 2021 first-round quarterbacks, plus a third-round guy in the Vikings' Kellen Mond.

In my opinion, Trevor Lawrence, Zach Wilson, Trey Lance, Justin Fields, and Mac Jones are all significantly better passers than Hurts, and each of them — with the exception of Jones — also have running ability. These guys all went top half of the first round, while Hurts went 53rd overall a year ago, and showed some significant flaws as a passer in his rookie season. So that all makes sense to me.

As for Mond, I have no strong opinions there, as I didn't study him as closely as the others leading up to the draft, but when I did happen to see his games casually on TV, he seemed like a decent enough prospect. So, whatever.

However, obviously it's laughable that guys like Case Keenum, Tyrod Taylor, Teddy Bridgewater, Jameis Winston, and Andy Dalton would make this list over Hurts, as they are all just mediocre passers who have little to no running ability at the current stages of their careers. Or perhaps better stated, none possess anywhere near the same running ability as Hurts, who is arguably the second-best runner among NFL quarterbacks behind only Lamar Jackson.

Benjamin Solak of BGN transcribed Simms' explanation on Hurts being left off the list.

I didn’t do it to create any headlines, but the way I look at it, he’s not as good as any of the 40 guys I’ve got here. Again, I understand his running — it’s good. Throwing, I still have major concerns about. And I can show you tons of throws on film and just go ‘Listen, this is not acceptable in the NFL, some of these throws.’ So there’s a lot more I’ve gotta see from that aspect.

I look at Jalen Hurts as kinda still a project, and a starting quarterback a little bit — I don’t mean this to be disrespectful — by default, because of the weird situation in Philadelphia. Not necessarily that he like, grabbed it by its horns and just blew everybody away...”Oh my gosh! Wow! He’s so good, we gotta keep him on the field!” No...I’ve still got way too many questions before I can throw him on here yet.

As Solak points out at BGN, Simms is essentially just hand-waiving away Hurts' value as a runner.

So where should Hurts be? I guess there are two ways to answer that.

In my opinion, he's better right now than Keenum, Taylor, Winston, Dalton, Taysom Hill, Drew Lock, and I would even go as far as to say as there's an argument that he was better than Tua Tagovailoa last season. So I'd have him like 34th or 35th.

If we're asking who would I rather have, I would take Hurts' potential over Bridgewater, Jared Goff, Marcus Mariota, Ryan Fitzpatrick, Jimmy Garoppolo, Cam Newton, and Sam Darnold. So, 27th or 28th if you were to look at it that way.

A couple of friends retired from the Eagles' beat

Les Bowen and Paul Domowitch both took buyouts from the Inquirer this week.

Les is a far better actual writer than I'll ever be, and he was always great at telling the human side of stories. I got to know Les quite a bit over the last 10 or so years, both on the road and during the daily grind of the season. What I'll miss most was his incredulous gestures when someone asked a dumb question, as well as seeing him nod his head approvingly in my peripheral vision whenever he liked a question I was asking. I won't miss him snapping pictures of interview subjects with me in the background making weird faces, and ending up on the front page of the Inquirer sports section.

The players all seemed to like him, too. Here's a clip of Lane Johnson telling a story about his worst game as a pro (Week 3 against the Chiefs his rookie season in 2013), after which Les was right there to ask him about it. If you've never seen this, it's worth a couple minutes of your time.

Domo, meanwhile, was as respected a reporter locally and nationally as there was on the beat, and he was Philly's representative for Hall of Fame voting after Ray Didinger gave that up a while back. Domo didn't care for a second about trying to garner any personal attention in his reporting, which is a rare trait among our ilk these days.

He knew his stuff, and was quietly awesome at his job.

Anyway, I'll miss them both, though there's no way in hell Les can quit Twitter, and Domo says that he'll transition to writing books, so I look forward to their post-beat material.