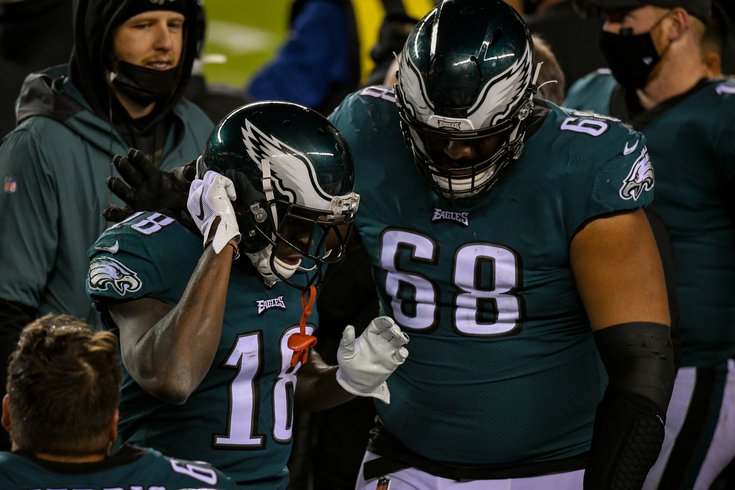 Jalen Reagor and Jordan Mailata celebrate during the Philadelphia Eagles game against the Dallas Cowboys.

The Philadelphia Eagles had the fewest number of draft picks in the NFL from 2018-2019, and as such, their metaphorical cupboard isn't exactly stacked with young talent ready to break out. They did make 10 picks in the 2020 draft, but only a few got legitimate playing time as rookies.

In 2020, there were a couple of unexpected breakouts in Alex Singleton and late training camp addition Travis Fulgham, for a five week stretch, anyway. Here are five young players who are candidates to take their games to the next level in 2021. (We'll exclude rookies, so you won't see DeVonta Smith here.)

We took a detailed look at Hurts' 2020 season way back in February, and while he is an outstanding runner with smarts, leadership qualities, and other appealing intangibles, his path to becoming a legitimate NFL starter will hinge on how much he can improve his accuracy.

In 2020, it wasn't good enough, but there is hope. Hurts did improve his accuracy throughout his college career, so perhaps there's some reason to believe he can do the same in the NFL, and he certainly seems to have the mindset of a player who (a) is realistic about where he is deficient and (b) is hungry to become a better player.

During training camp last year, Reagor's physical ability was rather obvious. He displayed the kind of speed and leaping ability that we haven't been accustomed to seeing in camp in recent years. At one point, Carson Wentz threw Reagor a hospital ball during practice, and Jim Schwartz playfully yelled out to Wentz to try not to get "the good player" hurt.

So what happened? We saw glimpses of what Reagor can do in the Week 1 game against the Washington Football Team.

However, in Week 2 he tore a ligament in his thumb, which caused him to miss five games. Upon his return, the Eagles' season was already in something of a downward spiral, with a quarterback playing like crap, a scheme that stunk, and Reagor himself paying too much attention to fans lamenting the Eagles' decision to take him over Justin Jefferson.

The hope for Reagor is that he wasn't thought of as a highly polished receiver coming out of TCU as some of the other receivers in the draft, and that it was always going to take some time for him to realize his potential before he was to break out. He has the talent. Can he avoid the distractions, become a more polished product, and simply make plays?

Mailata had a promising 2020 season, but we still had him down for 7 sacks allowed on the season, which led the team's offensive linemen. He's a brick wall against power rushers, but sometimes struggled handling opposing pass rushers with speed.

What was particularly encouraging about Mailata's season in 2020 is that if you watch his games chronologically, it's pretty clear on film that his confidence grew as the season progressed. What does that mean? As he got more comfortable, you could see the enjoyment he took in dominating opposing defenders physically, particularly in the run game. He's bigger than everyone on the field, and he wasn't shy about taking advantage of his size and power when the opportunity presented itself. For example:

An argument can be made that Mailata broke out in 2020, but his ceiling remains high, and there is still plenty of room for him to take his game to the next level.

Quez Watkins put the Cardinals in the Gravitron! pic.twitter.com/xWOZcssRCm

He showed some real juice in particular against the Cardinals, and could benefit from an offensive scheme that can put the ball in his hands with the chance to create after the catch. In theory, his speed should also make him a deep threat, but Watkins did not get any targets on vertical routes down the field in 2020. Perhaps more opportunities will come his way in 2021?

The Eagles' wide receiver room still isn't particularly packed with talent, and Watkins eventually overtook John Hightower on the depth chart last season. He's probably the fastest guy on the team. Figure out a way he can contribute.

I'm kind of running out of breakout candidates here, so I guess we'll go with Dillard to hedge against my Mailata praise above?  ¯\_(ツ)_/¯ (Watch Jack Driscoll come out of nowhere to start at LT.)

Dillard has to figure out a way to anchor against power. Otherwise, he's simply not going to make it in the NFL. That said, if he can iron out that major deficiency in his game, he has outstanding athleticism for the position, and the coaching staff Howie Roseman is going to give him every opportunity to beat out Mailata for the starting LT job.

Dillard was named by Tim McManus of ESPN as the surprise standout from Eagles OTAs:

The former first-round pick says he has a fire in him like never before after missing the entire 2020 season with a biceps injury. He ditched social media to eliminate distractions and hit the weight room hard over the past year, setting a number of personal records. He is stronger and more confident, and has drawn praise from offensive line coach Jeff Stoutland for his on-field work. He'll battle it out with former rugby player Jordan Mailata for the starting left tackle spot during training camp.

Dillard has that first-round pedigree, but I'm sort of in the "I'll believe it when I see it" camp.