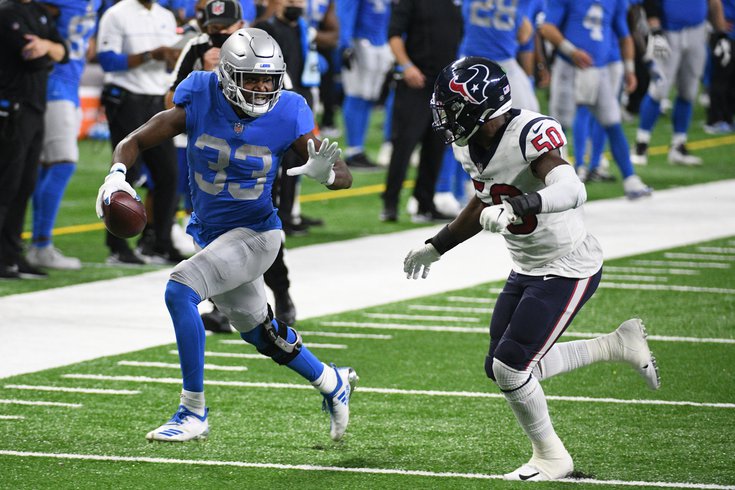 During the offseason, we'll be taking a look at a handful of players who are either new to the Philadelphia Eagles, or are already with the team but we perhaps don't know a lot about them just yet. Today we'll take a look at running back Kerryon Johnson.

After a productive college career at Auburn, Johnson was a second-round pick of the Lions whose career got off to a fast start, but who saw his yards per carry average decline in each of his next two seasons. He suffered a sprained left knee that caused him to miss six games in 2018, and a torn meniscus that caused him to miss eight games in 2019.

Johnson wore a bulky knee brace in 2020, and he said that he plans to continue to wear it for the remainder of his career, for peace of mind purposes. He added that it does not restrict his running.

As you can see below, he only carried the ball 52 times last season.

We cut up all of Johnson's 2020 carries and targets, which you can watch here:

• Explosiveness: Johnson's long rush on the year in 2020 was 14 yards. In 2019 it was 20 yards. As you can see in the video above, he is not a big play threat. To be determined if being an extra year removed from his meniscus tear will help him regain some juice.

• Tackle-breaking ability: As you can see in the video above, Johnson didn't break many tackles in 2020. You can count them on one hand. If a defender made contact, Johnson was almost always going down. That said, he did run with some power, as there were a handful of times in which he ran defenders over once he got a head of steam. He was just rarely ever able to stay on his feet through contact.

In short yardage situations (1-3 yards to go), Johnson carried 10 times for 25 yards, with 2 TDs and 7 first downs, so he was effective in that role.

• Receiving: His hands aren't great. There are at least two drops in the video above, and if you're grading drops harshly, you could probably add a couple more.

He was good at disguising screens, but once he had the ball in his hands, there were multiple occasions in which the Lions had the screen set up nicely with blockers out in front and Johnson left meat on the bone.

He's not a guy who will line up all over the formation, and make plays in the passing game like a slot receiver. He's mainly a checkdown or screen game guy.

• Pass protection: This is Johnson's main appeal, and his ability in pass protection is his best chance of making the roster. ProFootballFocus had him rated as the second-best running back in pass protection in the NFL in 2020, behind only Nick Chubb. They also had him down for 65 pass protection snaps, so it wasn't as if it was on a small sample size, which one might suspect for a back who only had 50 carries on the season. The Lions used him heavily in a pass pro role.

I watched three of his games from a pass protection perspective, and he is indeed good in that area. An example here:

Johnson is a no-risk addition. He will count for $1,366,869 on the 2021 cap, with no penalty to release him. The meniscus tear in 2019 — and Johnson's subsequent 2020 game film as a runner — are areas of concern, but he's worth taking a look at in camp, given his age (he'll turn 24 later this month), and low mileage (only 283 career carries). It's not often that the Eagles are awarded waiver claims like this, because it's not often that they finish 4-11-1 and are sixth in the waiver claim order.

At a minimum, I believe he offers more than Jordan Howard both in pass protection and as a short-yardage back.