Eagles should be looking for Fletcher Cox trade opportunities 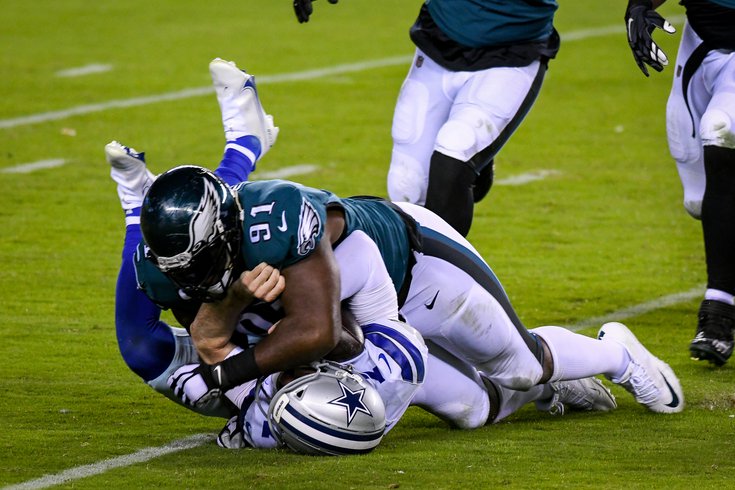 For the bulk of his nine seasons in the NFL, Fletcher Cox has been the best player on the Philadelphia Eagles' defense, and probably still holds that title heading into the 2021 season. The Eagles should trade him.

What? Why? Three reasons:

Let's explore each of those three reasons.

Cox is now 30 years old. He'll turn 31 in December, and his contract expires after the 2022 season. If the Eagles were going to contend in 2021 or perhaps 2022, then they should just keep him. But since the owner already conceded that 2021 will be a "retooling" year and anyone with a pulse who follows this team can see that this aging roster is going to have to undergo a major changeover, it's unlikely that 2022 is going to be a Super Bowl-contending year as well.

So you can probably do that math.

They can get something good for him now, but if they wait it'll be too late

His value likely won't be higher going forward than it is right now. So, you know, do it now.

Who would have interest?

Any contender. As noted above, Cox had his best season in the NFL in 2018, when he played in a 4-3 one-gap, occasional wide-nine scheme under Jim Schwartz. His second-best season was in 2015, when he had 71(!) tackles, 9.5 sacks, 11 tackles for loss, and 20 quarterback hits playing in a 3-4 two-gap scheme under Billy Davis. The point — Cox is a brute powerhouse with incredible athleticism who can excel in any scheme.

In a recent ranking of interior defensive linemen by ESPN, fueled by a survey of "more than 50 league executives, coaches, scouts and players," Cox ranked fifth:

"A little bit on the descent, but you know where he is at all times," said an NFC scout. "He's still tops on the scouting report when you prepare for Philly's defense. There was a time not too long ago when he was No. 2 [among interior D-linemen] and you wouldn't look back."

Added an NFC exec: "He's still a problem to me. He was on a bad defense."

Cox is better than Cam Heyward, who ranked fourth on that list, but whatever. The point is that he is still very highly thought of by NFL personnel people.

The only catch is that any theoretical suitor would have to either have room under the salary cap for Cox's $15 million salary in 2021, or the willingness to make room for him.

And those teams are?

• Chargers: The Chargers have just under $20 million in cap space, they are thought of as a contender, they have a new head coach Brandon Staley who previously had a dominant DT in his last stop as the Rams' DC, and Cox would be a major upgrade over projected starter Justin Jones.

• Patriots: The Pats drafted Christian Barmore in the second round, but Cox would be an immediate playmaker on a weak interior D-line rotation.

• Seahawks: Seattle always seems to be in on older defensive linemen when they become available, and they still have severe needs along their D-line. They'd have to move a little money around, but they have an abundance of cap space in 2022.

• Cardinals: The Cards have taken an "all-in" approach this offseason, and a trade for Cox would fit that theme.

So what could the Eagles get in return for Cox?

A second-round pick — a late 2, that is, given that the prospective suitor would be a contender — feels like a reasonable asking price.