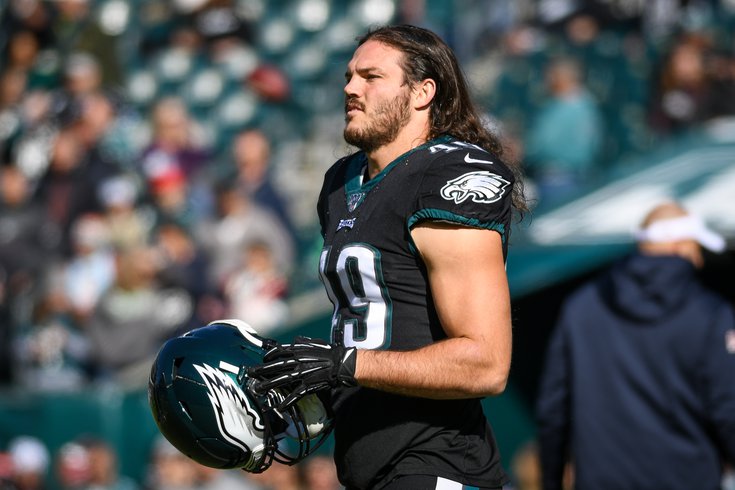 Leading up to training camp, we've been taking a look at every player on the Philadelphia Eagles' roster, and how they fit with the team. Today we'll look at the linebackers.

First, a look at the depth chart at linebacker:

Singleton was a rare bright spot in 2020. He only played 54 snaps the first five weeks of the season, and he still finished 15th in the NFL with 120 tackles. Give him those five full games as a three-down LB, and maybe he would have led the NFL in tackles?

Singleton proved that he is at least worthy of competing for a starting three-down role in 2021, and playing on a crappy exclusive rights tender this season, he should be properly motivated to prove that his 2020 season wasn't a fluke.

As we've noted endlessly, new Eagles defensive coordinator Jonathan Gannon is a Mike Zimmer disciple, which means that there's a decent bet that Eagles linebackers are going to get more opportunities as blitzers. There's also speculation that Gannon will run a lot of Cover-2, which means that those linebackers better also be able to play zone coverage.

Wilson filled up the stat sheet with the Vikings in both areas last season, as he had three INTs, eight pass breakups, three sacks, and nine QB hits. He also allowed just 5.6 yards per target in 2020, according to pro-football-reference.com. Oh, and he had 122 tackles.

Wilson is still only 26 years of age, and barring a dreadful camp will almost certainly start for the Eagles in 2021.

In 2019, as an undrafted rookie free agent, Edwards showed something as a base down linebacker, and proved that he belonged in the NFL as a contributor in the regular defense.

In 2020, Edwards quietly finished third on the team with 70 tackles, despite missing four games. He also had two sacks, a pick, and two forced fumbles. At a minimum, Edwards has proven that he can be a quality linebacker on run downs who is capable of filling in as a starter if need be.

Bradley only played 76 snaps with the regular defense in 2020, but I did a deep dive look at him anyway, and came away from that exercise encouraged by what I saw.

Bradley pretty much only played on run downs, in three-linebacker packages. As a run defender (and granted — small sample size here), he generally seemed to be assignment gap-sound, he showed good instincts, he was never really bullied by blockers, and he made the tackles he should have made. A number of those tackles were at, behind, or near the line of scrimmage.

There wasn't much to judge Bradley on in coverage as a rookie, as he wasn't targeted once in the games I watched, but his coverage was mostly good, and he has the speed to run down the field with tight ends and most running backs.

Bradley should get more opportunities to play in the regular defense this season, in my opinion, but even if he doesn't, his roster spot is probably secure because he is a core special teamer, and his 284 special teams snaps were second on the team, behind only Singleton (298).

At LSU, Stevens was a safety/linebacker hybrid. He was a savvy blitzer, he delivered some big hits, and he was a good defender in zone coverage. His career numbers:

As you can see, Stevens has high sack and TFL totals for a college safety. The Eagles' tendency to convert safeties to linebacker did not die with Jim Schwartz's departure, and will apparently continue on unfettered, which really is a trend that is occurring league-wide.

Stevens' skill set and his transition to linebacker makes a lot of sense in a Zimmer-like scheme that we anticipate Gannon to implement.

Taylor only played 32 snaps in the regular defense as a rookie, after being selected in the third round, which was too early, in my opinion. Unlike Bradley, after watching those snaps, Taylor's rookie season wasn't nearly as encouraging, as he had an abnormal number of negative plays. Taylor is a project player who is in a tough spot, because he needs game action to get better, but if he looks anything like he did as a rookie, he'll be unplayable.

At linebacker, Taylor is definitively behind guys like Wilson, Singleton, Edwards, and probably even Bradley. He'll also have to contend with Stevens and Avery, so his roster spot could be in jeopardy, even as a third-round pick of a year ago. The best thing that Taylor has going for him is that Howie Roseman has full control over the final 53-man roster, and there's no doubt in my mind that Roseman will care a whole lot more about Taylor's former draft status than any coaching staff would.

Still, Taylor does have raw athleticism, and he could serve as something of a litmus test for how well this defensive staff can groom and develop talent.

We took a deep-dive look at Avery last offseason and concluded that his appeal is that he can maybe be a hybrid linebacker / pass rusher. The Eagles have only used him as the latter, in very limited snaps, with his best usage coming as a stand-up rusher in a "Joker" role.

Avery was always going to be at a disadvantage playing DE at his size (he's listed at 6'0, 250, with short 31" arms) on normal down-distances, because he'll be a major liability against the run. And then even in obvious pass rush situations, I don't think you can line him up on the edge and expect him to get a high percentage of one-on-one wins, because his size will always limit his pass rush repertoire.

While his explosiveness is pretty clear, it was going to be a challenge to find ways to get him into games in that Joker role, without telegraphing to the offense what's coming, unless he could also develop as a linebacker who can cover and play the run.

The last two seasons, Schwartz had very little use for Avery, likely for those reasons. Under Gannon, Avery will be transitioning to linebacker, which finally makes sense.

(We'll skip the criticism of trading a fourth-round pick for him at the 2019 trade deadline.)

Smith was on the Cowboys' 53-man roster from Week 2 to Week 7 last season, but was inactive for each game. He got waived in October, and picked up by the Eagles in November. He appeared in two games for the Eagles, and played in the regular defense for 23 snaps in the tank game Week 17. He's a longshot to make the final 53 out of 2021 camp.