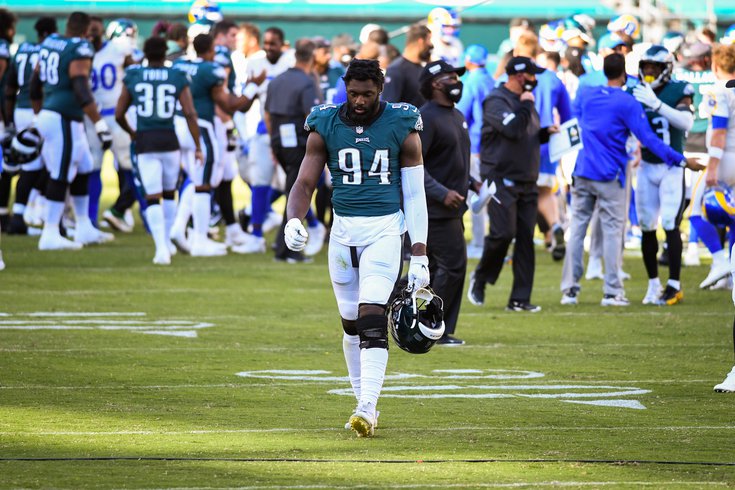 Leading up to training camp (basically whenever there isn't other news to cover), we'll take a look at every player on the Philadelphia Eagles' roster, and how they fit with the team. Today we'll look at the defensive ends.

First, a look at the depth chart at defensive end:

Graham was easily the best player on the Eagles' defense through the first half of the season, but his production faded down the stretch:

Off the field, Graham has unlimited energy and positivity, and he is a player that you just want to have around if you're a head coach in the NFL. His veteran presence could be particularly useful to a new and unestablished head coach like Nick Sirianni, or a first-time defensive coordinator like Jonathan Gannon.

Graham turned 33 in April, and assuming Jason Peters doesn't come back, he is now the longest tenured player on the roster.

Barnett finished with just 5.5 sacks in 13 games in 2020, bringing his career sack total to 19.5 in four seasons, which falls short of reasonable expectations for a player picked 14th overall. While still only 25 years old, it's fair to wonder what kind of ceiling Barnett has, given that he was drafted so highly because of his college productivity, as opposed to his athletic measurables. There are also concerns about Barnett's durability, as he missed 10 games in 2018, two games in 2019, and three games in 2020.

Last offseason, the Eagles exercised Barnett's fifth year option, and he will count for $10,051,000 on the 2021 salary cap, a figure that is now fully guaranteed. The consensus thought was that the Eagles would get a new deal done with Barnett to significantly lower his 2021 cap charge, but somewhat surprisingly, he'll play on that cap number this season, and he is scheduled to become an unrestricted free agent in 2022.

Obviously, this is a huge year for Barnett, financially speaking.

Here are those six sacks. The final sack here, where Sweat gets a straight left arm into Terron Armstead's chest, lifts Armstead's outside arm with his right hand, and then bull rushes him deep into the pocket is a coordinated thing of beauty, and probably the best example of how far along Sweat has come, technique-wise.

Like with Barnett above, the 2021 season will have huge financial implications for Sweat, as he is in the final year of his rookie contract.

Kerrigan has quietly been one of the most consistent pass rushers in the NFL over the last 10 years, racking up 95.5 sacks and 26 forced fumbles over that span. He has been a thorn in the side of the Eagles over the years, as he has 13.5 sacks, six forced fumbles, 24 QB hits, 51 tackles, and three fumble recoveries against the Birds in 19 career games. All of those stats are personal bests against any one team.

His production dipped last season in a smaller role, as he only played 38 percent of the team snaps on a loaded WFT defensive line. He had 5.5 sacks, five additional tackles for loss, and six QB hits.

In Philly, his role should be interesting. Will he play something of an "Anthony Barr role" in the Eagles defense, or will he be more of a straight-up fourth edge rusher, like Chris Long was when the Eagles signed him during the 2017 offseason? We'll get more clarity on his role in camp.

Jackson is a short, thick pass rusher who had good production (18 sacks, 26.5 TFL) his last two seasons (23 games) at Coastal Carolina. He is known as a power rusher with hand fighting ability, and (Andy Reid alert!) a high motor, which are sort of a necessary traits given his lack of height/length and ideal athletic measurables.

Jackson displayed inside-outside versatility in college, and as such, it came as a surprise that he only weighed in at 254 pounds at the Combine. The bet here is that the Eagles will try to get him to bulk up to around the 270 range, to put him in a position to contribute as a high-effort rotational guy both inside and outside in the pros. He'll have the opportunity to learn from Brandon Graham early in his career.

At Tulane, Johnson was a high energy pass rusher with some burst who at one point in 2020 led the nation in sacks, and finished in a tie for third with 10. Since 2018, Johnson had 24.5 sacks, six forced fumbles, and 11 batted passes for Tulane. He won with speed against lesser competition, and effectively countered that speed with speed-to-power rushes.

At 6'2, 240, Johnson is too small to play as a base down DE in the NFL. The Eagles announced him as a linebacker, and his conversion to the second level will be an interesting one in the Eagles' scheme, as it is expected that linebackers will have more blitzing opportunities under Jonathan Gannon than they did under Jim Schwartz.

There are already plenty of hints that Jonathan Gannon will have an Anthony Barr-like role in the Eagles' defense, as mentioned above. Players who fit that role include Kerrigan, Genard Avery, Joe Ostman, and Johnson.

So if he's listed at linebacker, then why is he in the defensive end section? The bet here is that if he plays at all as a rookie, it will be in pass rushing role.

Ostman has been a training camp darling the last two seasons, and a real problem (in a good way) for Jordan Mailata during practice. In 2020, Ostman got his first ever real game action, appearing in three games, and playing a total of 29 snaps. He got rudely welcomed to the regular season by Nick Chubb.

Ostman feels like a good bet for the practice squad yet again.

Bailey is an undrafted free agent rookie who had 25.5 sacks over his career in 54 games at Iowa State. At 6'2, 246, I thought the Eagles might potentially view him as a linebacker, but it appears that he'll be staying at DE. He is a deep longshot to make the roster, obviously.

Leo joined the Eagles last season as part of the International Player Pathway Program. He has a fun backstory, and his spot on the practice squad is secure.