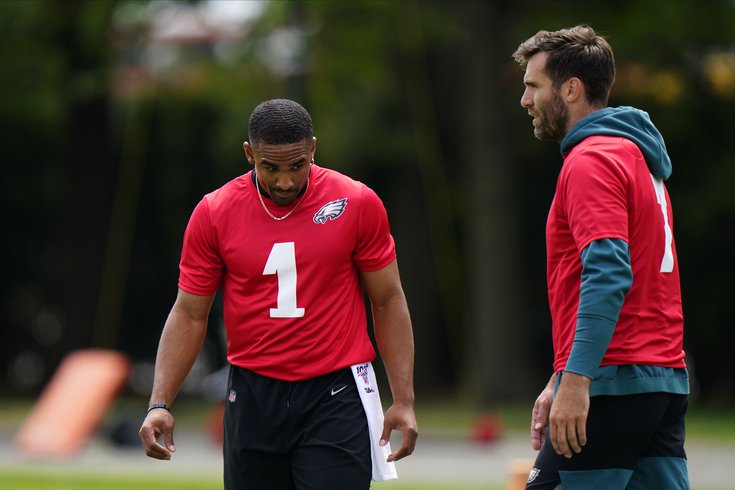 As always, we'll start with the quarterback factory.

Earlier this offseason, we took a deep-dive look at Hurts' 2020 season, so go take a look at that, please and thank you. For those of you too lazy to check that out, the crux of it was that while Hurts has a lot of things going for him (physical and mental toughness, poise, running ability, leadership traits, etc.), he also has a serious and potentially fatal flaw, which is a lack of accuracy.

In OTAs, in the limited time we got to watch practices, an emphasis seemed to be on accuracy drills, shown here:

In 2020 training camp, Hurts often ran with the football instead of running the offense, which is to be expected of rookie quarterbacks who have running ability to fall back on as a crutch. That approach isn't very helpful in practice settings. It was fine when he was the No. 3 quarterback in camp and he was just getting his NFL sea legs under him, but as the starter, he's going to have to run the offense in a way that he and the young skill position players surrounding him can begin to master Nick Sirianni's scheme.

The Eagles need to get a clearer picture of what they have in Hurts so they can be guided accordingly on how they spend their two (maybe three) 2022 first-round picks. Of course, how he plays in 2021 in real games will be the biggest deciding factor, but evaluation of Hurts is already underway, and will ramp up throughout the rest of the summer.

Like we did with Hurts, we also took a deep-dive look at Joe Flacco's four starts with the Jets last season. Spoiler: It was ugly. For some reason that I will never understand (and you're all probably sick of me bringing up), the Eagles gave Flacco $3.5 million in guaranteed money (with the chance to make as much as $7.5 million), which was pure insanity given that Flacco earned just $1,562,500 last year with the Jets, meaning that the Eagles gave him a 224 percent increase in pay after a season in which Flacco went 0-4 as a starter, and looked bad in the process.

Settle down, Jimmy. You promised yourself you wouldn't do this again.

Mullens will likely be the No. 3, but there's a reasonable enough argument that he's better than Flacco, at least at their respective stages of their careers. To be determined if the Eagles legitimately view Mullens as competition for Flacco's primary backup spot.

Hurts is probably going to have to leave no doubt in 2021 that he should be the team's franchise quarterback going forward, or the Eagles will be very likely to explore long-term answers in 2022, either through the draft or via trade. If Hurts shows that he can be that guy, then the Eagles will (potentially) have three first round picks to improve their roster around him. If not, some combination of those picks will be allocated to the factory.

In the meantime, the Eagles will hope that Carson Wentz stays healthy in Indianapolis, and plays just well enough not to get benched.