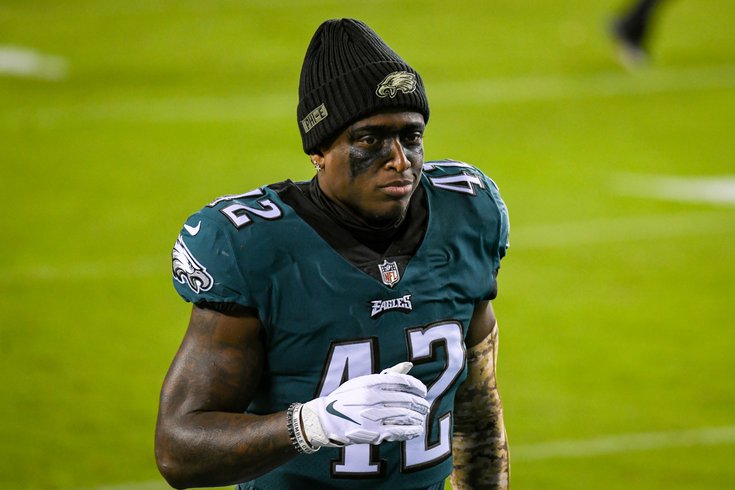 During the offseason, we'll be taking a look at a handful of players who are either new to the Philadelphia Eagles, or are already with the team but we perhaps don't know a lot about them just yet. Today we'll take a look at safety K'Von Wallace.

Before the start of last season, I believed that Wallace, the fourth of the Eagles' 10 draft picks in the 2020 draft, was a decent possibility to play significant role in the regular defense. If I were to have ranked the Eagles' rookies in order of projected rookie contributions, I'd have had him second behind only Jalen Reagor.

As it turned out, Wallace didn't play much in the regular defense, and was only an occasional role player when the Eagles were short some players in the secondary due to injury. Prior to the start of the season, Jim Schwartz tried to warn us that guys like Wallace, Davion Taylor, and Shaun Bradley weren't going to see the field much, especially in a COVID-shortened offseason.

"Linebacker and safety are two of the most difficult positions for guys to get up to speed," Schwartz said. "That’s including having a full offseason program for rookies, OTAs, minicamp, a full preseason schedule, and preseason games."

For this exercise, I looked at Wallace's snaps against the 49ers, Steelers, Packers, Saints, Cardinals, Cowboys, and Washington. Here's what I found:

For those of you who prefer to read instead of watching a video:

Wallace didn't get a lot of targets his way as a rookie, so there isn't a big sample size to evaluate, but generally speaking, he was fine. He kept receivers in front of him, and didn't give anything up deep down the field. In man coverage, he was easily able to run with tight ends and running backs, though at 5'11, 205, he'll be giving up significant size to some of the league's bigger tight ends.

Wallace had 21 tackles on the season, and I have him down for 3 missed tackles in the games I watched, which doesn't include the bad angle he took on Aaron Jones' 77-yard TD run against the Packers. Skill players are bigger, stronger, and faster in the NFL, so it's not uncommon for rookies to miss their share of tackles, but it's an area of concern.

Beyond the missed tackles, as shown in the video above, Wallace had a habit of going low on running backs, conceding that they will gain an extra yard or two (or three) when they fall forward.

Wallace was a four-year player at Clemson, and before that, he was a first-team all-state selection (Virginia) both as a wide receiver and a defensive back. There are some examples that we point out in the video above, but Wallace knows what he is doing. This is not a raw prospect who will take years to figure out how to play football in the NFL, at least from a football IQ perspective.

In Jonathan Gannon's defense, linebackers and safeties may get more blitzing opportunities than they did under Jim Schwartz. Very small sample size here, but Wallace did not impress as a blitzer as a rookie, at least in the games I watched.

Wallace was a regular on kick and punt coverage, and his effort was excellent.

Anthony Harris will start at one safety spot, and Rodney McLeod will start at the other, whenever he is recovered from his ACL tear. Wallace's biggest competition for that third safety role will be Marcus Epps and Andrew Adams.

It should probably be considered a disappointment if Wallace cannot beat out guys like that in his second season, but in my opinion, in a small sample size, he showed enough as a rookie that he can play in the NFL, and I like his chances to be that third safety in 2021.