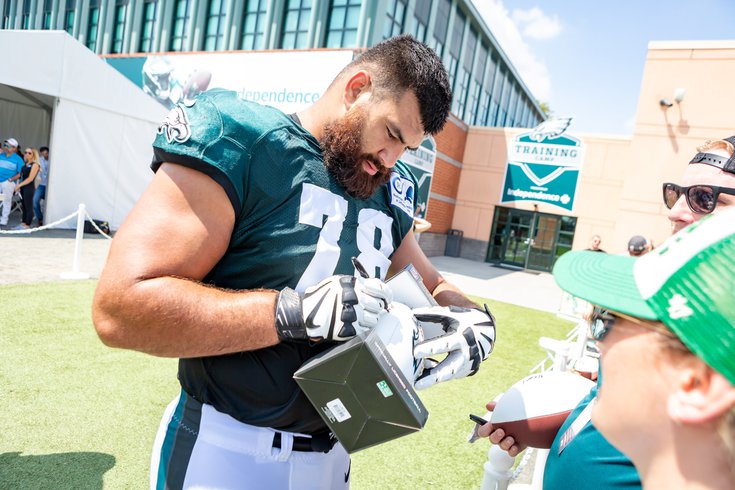 During the offseason, we'll be taking a look at a handful of players who are either new to the Philadelphia Eagles, or are already with the team but we perhaps don't know a lot about them just yet. Today we'll take a look at guard Sua Opeta.

Why are we reviewing Sua Opeta? Well, it's July 4th, and nobody is going to read this anyway. But also, he wasn't bad in his first ever NFL starts last season.

As a quick refresher on your Sua Opeta history, he was an undrafted free agent in 2019 who was on the practice squad his rookie season, before being called up to the 53-man roster late in the season (he didn't play in any games). In 2020, Opeta once again landed initially on the practice squad, but was a short-term activation both in Week 1 and Week 2, before sticking on the 53-man roster for the bulk of the season until a bulging disc that required surgery landed him on IR for the final month-plus of the season.

Opeta was forced to start two games, both against the Giants, in Weeks 7 and 10, his first ever NFL action, aside from a handful of snaps against the Steelers and Ravens. A look at his season snap counts:

Coming out of Weber State, Opeta had some intriguing athletic measurables, notably his 40 time, and some explosiveness traits (vertical jump, broad jump, and bench press).

In his first ever start Week 7 against the Giants, he played LG next to another extremely inexperienced player in Jordan Mailata at LT. In his Week 10 start, he was once again at LG, this time next to Jason Peters.

He also played Week 11 against the Browns, at RG, after some injuries forced him into the game in the second half. For this exercise, I watched all of Opeta's snaps against the Giants and Browns (165 of his 170 career snaps).

The first positive that stood out was his athleticism as a puller. He had the key block on a long Boston Scott TD run (again, he's the LG here):

And how about one more:

He also generally did a nice job getting to the second level and blocking linebackers. Like here:

I was also sort of pleasantly surprised by his recognition of blitzes and stunts and such, and the way he worked with Mailata, Peters and Kelce, passing off pass rushers to each other. This following play stood out on that front. Watch him shove the blitzing linebacker, like, "You go get blocked by the LT," and then he easily picks up the edge rusher looping inside:

In the screen game, he did a nice enough job disguising the screen, and again, had enough athleticism to make key blocks in the open field, like here on the safety:

In pass protection, Opeta saw a lot of Leonard Williams, as the Giants hoped to exploit what they had to have felt was a mismatch. But for the most part, Opeta held his own against Williams, save for this holding call Williams was able to draw on Opeta, after putting him on roller skates.

The other obvious pass rushing loss was below, when he was beaten fairly cleanly on a blitz with a speed rush.

But again, for a player getting his first ever real game action, there was a lot more of this below, than there was in the two gifs above.

One of the silver linings of so many offensive linemen going down last season was that we got to see some of the young reserves play for the first time. Jordan Mailata and Nate Herbig in particular played far more than anyone would have anticipated, and both players helped themselves in terms of potentially important roles going forward.

I believe that Opeta played well enough in his two-plus games to warrant some optimism as well.

When you look at the Eagles' offensive line depth chart, there doesn't seem to be much room for a player like Opeta to make the roster:

He is a roster-worthy player, and the Eagles make more than their share of backup lineman trades during training camp. I believe that a trade of Opeta (or some other lineman to make room on the roster for Opeta) would make sense.