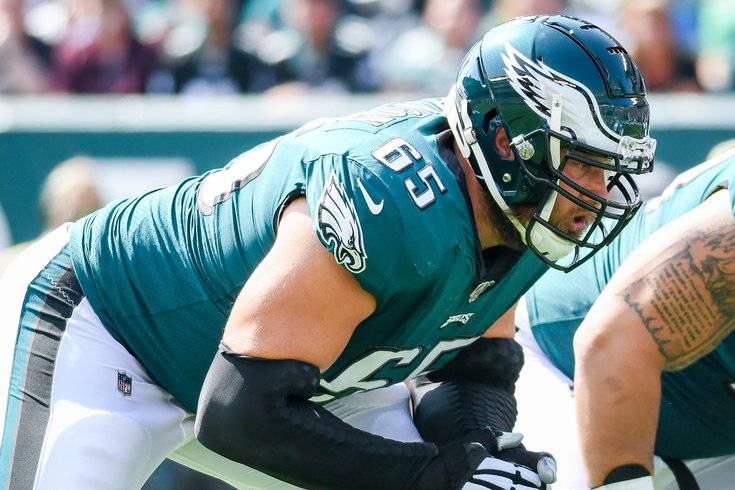 Over the next three weeks or so (basically whenever there isn't other news to cover), we'll take a look at every player on the Philadelphia Eagles' roster, and how they fit with the team heading into training camp. Today we'll look at the offensive tackles.

First, the depth chart at OT:

When he played in 2020, Johnson was very good despite dealing with an assortment of injuries, most notably an ankle injury suffered in 2018 in London that remains problematic. He had surgery to correct a lingering issue with that ankle, and when asked if it'll ever be back to 100 percent, the ever-honest Johnson was basically like ¯\_(ツ)_/¯.

If his ankle cooperates, Johnson will likely remain an outstanding offensive tackle, and arguably the best right tackle in the NFL. However, he is now 31 years old, and he has missed 13 games (nine in 2020, four in 2019) the last two seasons. He's kind of an important player. In games that Johnson has missed since 2016, the Eagles are 8-17.

Interestingly, the Eagles restructured a slew of contracts this offseason to get under the salary cap, but they did not touch Johnson's. Reworking his contract would have made a lot of sense, assuming the team still viewed Johnson as a mainstay along the offensive line. Remember, a contract structure typically means immediate cap relief, but a longer-term commitment to that player. For whatever reason, the Eagles left Johnson's contract as is.

Of the players I reviewed this offseason, Jordan Mailata was the most fun and interesting subject to watch. You all know his story, presumably, but he got his first taste of real game football (at any level, ever) in 2020, and he had himself a very encouraging season, eventually unseating Jason Peters as the starting LT.

Mailata is the most imposing-looking player on the team at 6'8, 346. Some big players play big, and some don't. As the season wore on in 2020 and he gained confidence along the way, you could on film that he enjoyed dominating in the run game, taking full advantage of his immense size and sheer brute strength.

In pass protection, he was stout against power rushes, though he did struggle at times with speed. Still, his ceiling remains high, and there is still plenty of room for him to take his game to the next level.

In 2021, he'll have to earn a starting job over Andre Dillard, and he should probably be viewed as the favorite.

Dillard's NFL career has not gotten off to good start after the team traded up in the first round to draft him. He was horrid in 2019 as rookie (and not just at RT), and simply could not anchor against power rushes. That's a fatal flaw for any offensive lineman, and must be corrected. In Year 2 he was having a concerning training camp before he was lost for the season with a torn biceps.

In a recent interview, Dillard said all the right things (he's hungry, invested, getting stronger, etc. etc.) which is certainly better than if he had said that he's been playing Mario Kart and eating pints of Americone Dream every day for the past year. So that's all fine and good, but ultimately, Dillard will have to show that (a) he can he can handle power better than he did as a rookie, and (b) he can scrap and fight with defensive linemen, as opposed to just solely relying on his athletic gifts.

The Mailata-Dillard battle will be one of the most closely-watched aspects of training camp.

In a normal year, the Eagles might have cross-trained Driscoll at tackle and guard (and maybe even center), but he mostly focused on tackle during the COVID-shortened offseason last summer. As a rookie, he appeared in 11 games, starting four, and he played a total of 300 offensive snaps before landing on season-ending injured reserve with a sprained MCL.

When we did a deep dive of Driscoll's 2020 season, it was easy to identify that he is clearly better when protecting the quarterback than he is in the run game. Because he is only 6'5 with only 33" arms, the belief here was that Driscoll's likely best spot in the NFL would be at guard. After watching him play, the Eagles were probably right to have him play tackle initially.

In pass protection, Driscoll has quick, nimble feet, and he can mirror and match any speed rusher. For example, Driscoll's shining moment of the 2020 season was when he did an outstanding job on T.J. Watt, a guy with 42.5 sacks the last three seasons. He does need improvement against power.

As a run blocker, Driscoll simply needs to get a lot stronger. He gets virtually no movement whatsoever at the line of scrimmage. When he stalemated with his opponents last season, you would consider that a win.

So where will the Eagles play Driscoll going forward?

• If you keep him at OT, that's fine, but he'll always be at a disadvantage because of his lack of ideal length.

• If he plays guard, he has a ways to go before he'll give you anything as a run blocker. He probably can't play guard, at least as a starter, without substantially added strength.

• At center, Driscoll's football IQ seemed good as a rookie, and he didn't shrivel when presented with difficult assignments, so that would make some sense, however, the Eagles likely drafted Jason Kelce's eventual replacement at center in Landon Dickerson.

Perhaps the answer is that the Eagles will try to develop him into a "jack of all trades," pardon the pun, who can come off the bench and play any position, if necessary. Those kinds of players can be very valuable.

Clark was a third-round pick of the Colts in the 2016 NFL Draft. He has appeared in 47 games, starting 15. Clark has guard-tackle versatility, as he has started games for the Colts at LT, RT, and RG. He has average athleticism, but excellent length, notably his 36-plus inch arms.

Clark tore his Achilles in early December, 2020, which means that he'll likely be unavailable to participate fully in Eagles training camp. However, the team could place him on the PUP list, where he wouldn't count toward the 53-man roster, and he could perhaps serve as added depth deeper into the regular season.

Coming from Indianapolis, Clark is obviously a player with whom Nick Sirianni is familiar, but we (the media) likely won't get a good look at him this summer.

Toth has ping-ponged between the Eagles and Cardinals since entering the league in 2019. He got his first game action in 2020, appearing in six games, and he even started in the tank game in Week 17. I'll be honest — I haven't specifically watched Toth play, so I can't really comment on that, though he wasn't an obvious liability at any point during the season.

The Eagles have quite a bit of depth at OT, so Toth will probably need a couple guys to go down to make the roster, but he should at least be able to stick on the practice squad.