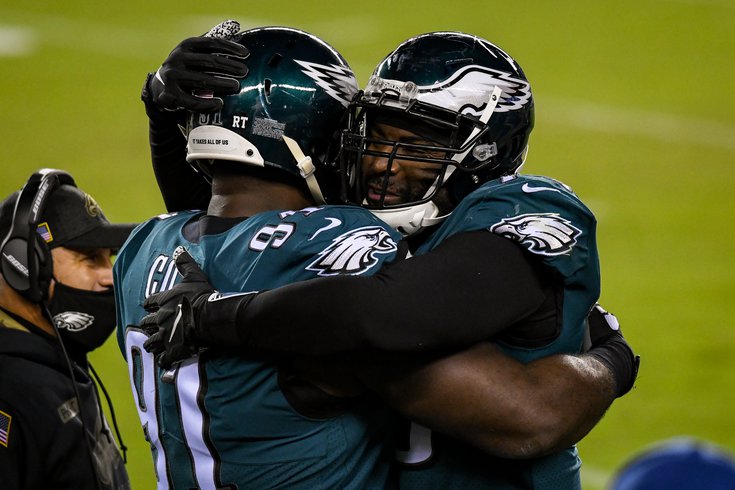 Fletcher Cox and Javon Hargrave hug during a Philadelphia Eagles game against the Dallas Cowboys.

Leading up to training camp (basically whenever there isn't other news to cover), we'll take a look at every player on the Philadelphia Eagles' roster, and how they fit with the team. Today we'll look at the defensive tackles.

First, a look at the depth chart at defensive tackle:

Cox made his sixth straight Pro Bowl in 2020, but that was mostly as a result of reputation as well as the lack of DT competition in the NFC. While still a very good player — and still probably the best player on the Eagles' defense — Cox is not the elite star he once was. In 2018, for example, Cox had 10.5 sacks an 34 QB hits. In 2019 and 2020 combined, he had 10 sacks and 19 quarterback hits.

If the Eagles' 2021 season gets off to a bad start, they should seriously consider entertaining trade offers for Cox, who can help a Super Bowl contending team. They could improve their future cap situation while getting something good in return for him while he still has value.

During the 2020 offseason, Hargrave signed a three-year, $39 million contract with the Eagles. After missing pretty much all of training camp with a pectoral injury, Hargrave was invisible for the first 10 or so games of the season, before turning it on in December.

Blame the early lack of production on the missed time in camp, or on learning a new defensive scheme, but clearly, this is a free agent contract the Eagles would probably like to take a mulligan on.

Going forward, Hargrave is a good player who can still help the Eagles, and if he's healthy this year, perhaps the defense won't have to wait until December to see some positive results.

After Williams was drafted — once we got past the dissension in the Eagles' war room after the pick, anyway — the most obvious takeaway from Williams' draft profile was his incredible athletic testing measurables from his pro day workouts.

Compare him with Miles Sanders, who also tested well as a running back, and here's what you get:

The point we're going a long way to make here is that Williams is an elite athlete.

Williams started his career at Louisiana Tech at DE, before moving inside for his junior season. In a small sample size (10 games) at DT, playing at an undersized weight somewhere in the 260-270 range, he had 45 tackles (10 for loss) and 4.5 sacks. He had his share of very impressive reps in 2020:

.@miltonw_12’s athleticism and explosiveness are on full display in the latest Rookie Film Room, presented by @lincolnfingroup.#FlyEaglesFly pic.twitter.com/S1aAwpQHpH

Williams will be a clear player of interest in camp.

After selecting Williams in the third round, the Eagles continued to add to their DT depth in the sixth round with their selection of Tuipulotu, a shorter 6'2, 317-pound nose tackle type. Over the last three seasons at USC, in 29 games, Tuipulotu had 102 tackles, 15 for loss, and 8.5 sacks.

Tuipulotu is a good run defender, and his value will likely be on early downs. As a pass rusher, even if he's not getting to the quarterback, he could be effective pushing the pocket and giving the edge rushers more opportunities to get home because the passer can't step up into the pocket. As we've mentioned previously, he might even play more early on in his career than Williams, the third-rounder, because his role as a big-bodied run-stuffer requires less acclimation to the NFL.

The Eagles initially acquired Ridgeway from the Colts for a seventh-round pick during the 2019 NFL Draft. He previously played under defensive coordinator Jonathan Gannon for one year in Indy in 2018.

Ridgeway has been a decent rotational defensive tackle for the Eagles when he has played, but he has missed 29 games the last three years, including 18 with the Eagles over the last two.

In 14 games with the Eagles, Ridgeway has 19 tackles (6 for loss), 3 sacks, and 5 QB hits. He will only count for $950,000 on the cap, which is fine on the surface, however, the risk in signing him is that if he makes the roster and the team is relying on him to produce in a rotational role, they will have to replace him with a guy off the street if he gets hurt again mid-season.

McGill is under contract in 2021 for $850,000. 7 games, 9 tackles, 0.5 sacks in 2020. In taking deep-dive looks at some of the other defensive players I've reviewed at in our "Eagles player profile" series, McGill flashed on occasion. If the Eagles keep five DTs, I believe he has a decent chance of beating out Ridgeway for a roster spot.

Williams was a priority undrafted free agent in 2020, who played six games, and finished with five tackles and a sack. He spent most of the 2020 season on the practice squad, so unless he kills it in the preseason games, the Eagles can pretty easily stash him on the practice squad once again.

I'll be honest. I forgot that this guy was on the roster when I sat down to write this. Henry was a fourth round pick of Baltimore in 2016, which means that Andy Weidl knows him well. He didn't play at all as a rookie, but he played 15 games (3 starts) in 2017, posting 33 tackles and 3.5 sacks. He has only appeared in four games since.