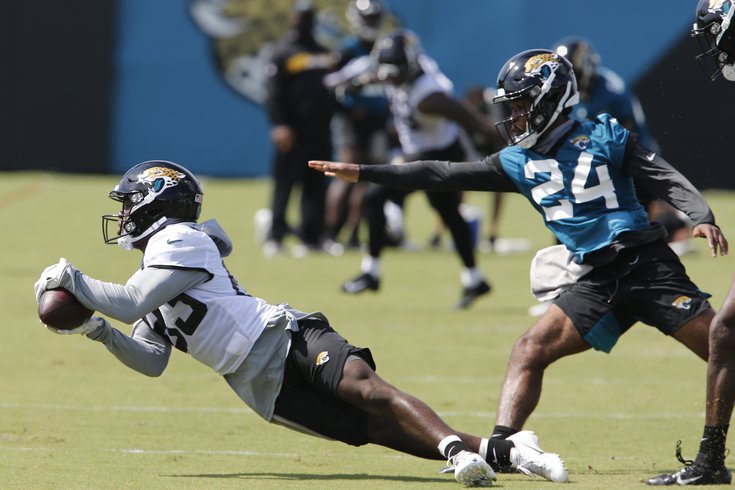 During the offseason, we'll be taking a look at a handful of players who are either new to the Philadelphia Eagles, or are already with the team but we perhaps don't know a lot about them just yet. Today we'll take a look at slot corner Josiah Scott.

Scott was a fourth-round pick (137th overall) of the Jags in 2020. He appeared in just six games (no starts) as a rookie, making 11 tackles on 80 defensive snaps. A look at his snap distribution:

According to pro-football-reference.com, Scott was targeted seven times, giving up six completions for 77 yards and an opposing passer rating of 112.5. They have him down for zero missed tackles. Obviously, those are small sample sizes, and after watching his targets, his coverage wasn't as bad as those numbers might suggest.

In college, in his final season in 2019 at Michigan State, Scott had 52 tackles, three INTs, six PBUs, and a forced fumble. He is short and light with T-Rex arms, but has good 4.42 speed and strength (17 bench reps):

In his scouting report of Scott leading up to the 2020 NFL Draft, Lance Zierlein of NFL.com compared Scott to Avonte Maddox, and within his report, noted that Scott was "affectionately nicknamed 'The Gnat' by teammates for his pesky, persistent coverage talent and playing style."

Back in March, the Eagles traded cornerback Jameson Houston and a sixth-round pick in 2023 for Scott, which makes him likely to crack the 53-man roster, especially on a team that is extremely thin at cornerback.

Here's what I saw when watching Scott's snaps during the 2020 season:

For those of you who would rather read:

With his 4.42 speed, Scott should have no problem running with NFL slot receivers, which you can see in the above video against Justin Jefferson, who unsuccessfully tried to take him deep twice. As noted in the video, I don't know what the defensive calls were on his targets against Jarvis Landry, but the cushions he allowed were too big, leading to easy completions.

Obviously, no definitive statements can be made about Scott's coverage ability after seven career targets.

For a guy who is only 5'9, 185, I liked what Scott showed in run support. He appeared to be a sound tackler, and while there were a few times (not shown) that he did a little pile watching (nothing egregious on that front), he was willing to take on bigger blockers and make tough tackles on bigger ball carriers.

Scott is obviously a player the Eagles liked in the 2020 draft, because they wouldn't have traded a sixth-round pick for him based solely on his limited 2020 tape.

If we're assuming that Maddox is going to be the Eagles' starting slot corner in 2021, Scott will very likely back him up. If Maddox somehow ends up at safety or back on the outside due to other injuries in the defensive backfield, Scott may not need an injury specifically to Maddox to see the field.

And then if we're looking long-term, Maddox is in the final year of his rookie contract. If the Eagles want to go cheap at slot corner, and Scott shows something during the 2021 season, they can let Maddox walk in free agency, with Scott filling in to that starting slot corner role on a cheap contract that runs through 2023.