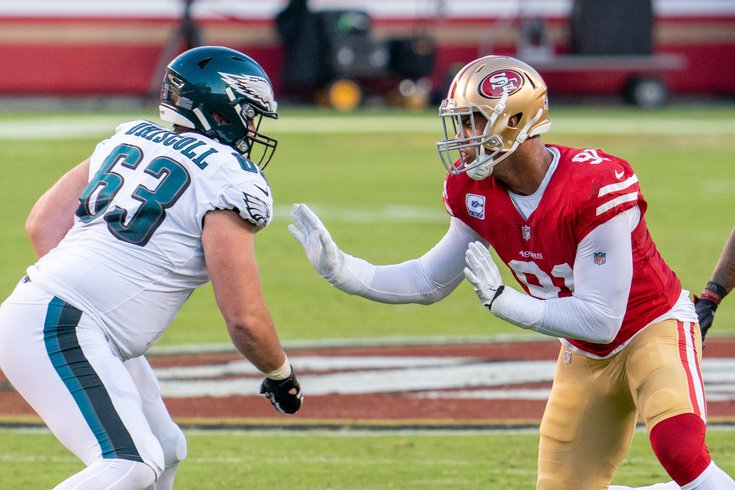 The Philadelphia Eagles announced Thursday afternoon that they have placed offensive lineman Jack Driscoll, tight end Tyree Jackson, and cornerback Josiah Scott injured reserve. They will be eligible to return from IR to the active roster after Week 3.

Driscoll's move to injured reserve comes as a surprise, as his injury is still unknown. We'll update when we know what it is. (Update: pectoral strain.)

Driscoll would be the first lineman off the bench if Lane Johnson were to go down, so it's at least a noteworthy loss, but not a crushing one. As a rookie, Driscoll appeared in 11 games, starting four, playing a total of 300 snaps, and looking like a competent player.

However, he dealt with a handful of injuries, including an MCL sprain that ended his season.

Jackson suffered a broken bone in his back during joint practices with the New England Patriots. The injury did not require surgery, and his recovery period at the time was deemed by the team to be 8-10 weeks. That was two weeks ago, so (checks math) Jackson should be back 6-8 weeks from now.

Entering training camp, Jackson was thought of as an intriguing developmental player who was transitioning from quarterback to tight end. At 6'7, 249 pounds, Jackson has excellent size for a tight end, and athleticism to go along with it. However, being new to the position, it was expected that progress would come along slowly.

However, Jackson exceeded expectations, making several nice plays each day throughout camp, while showing surprisingly good hands and continuously improved route running, to the point where he was looking like a lock to make the team.

On Tuesday, Nick Sirianni was asked if there was a player who wasn't on his radar so much when camp began, but who made himself known as it progressed.

"I mean, Tyree Jackson," Sirianni said. "I know where he's at right now, but he played quarterback last year for goodness sakes, so that's an easy one for me to answer because he played quarterback, and he came out here and he really was showing how good of a tight end he can be. Super happy with that."

Rather than shut Jackson down for the season by placing him on season-ending IR prior to 53-man cutdowns, the Eagles chose to allow Jackson to occupy a roster spot on the initial roster, and as a result, the Eagles can now place him on short-term IR, which, as noted above, will allow him to return at any point after Week 3.

Scott was a bubble player who got hurt in the third preseason game against the Jets. He made the team, but will be shelved for at least three weeks. If the Eagles need a short-term callup from the practice squad Week 1, Craig James is available.

One player of note who did not land on IR is Taylor, when it looked like he might.

When the Eagles opened camp, Taylor was getting a lot of first-team reps, as the team seemed eager to get him as much work as possible so the mental side of the game could catch up to his athletic ability. However, after just a small handful of practices, he went down with a calf injury, and hasn't yet returned.

As a rookie, Taylor mostly struggled in limited opportunities, but the team is hopeful that he can make a big jump forward in his second season.