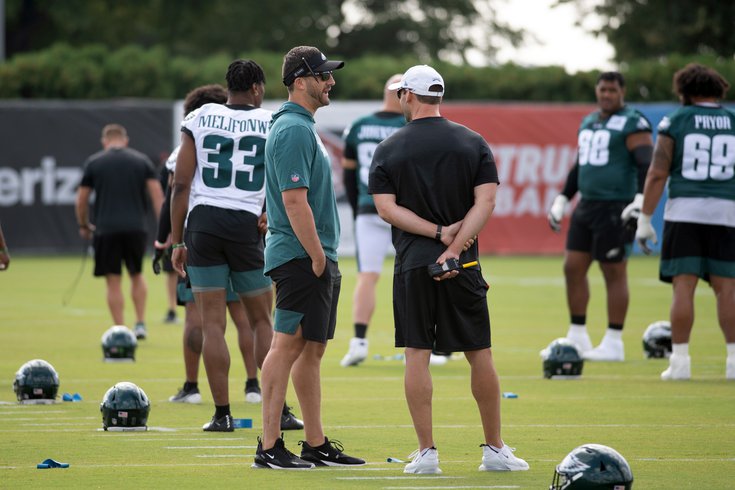 Forget the next friendly game of roshambo at the NovaCare Complex, the biggest competition at Eagles camp might be the innovative teacher swimming upstream against the expectation of helping the overwhelmed student.

Saturday's practice session in South Philadelphia was one for the books.

In this particular causality dilemma, you had to decipher if the chicken (Jonathan Gannon's defense) was the reincarnation of the 1985 Chicago Bears or the egg (a Jalen Hurts led offense without Brandon Brooks, Isaac Seumalo, and DeVonta Smith) was responsible for one of the worst offensive practices in my 25 years of doing this.

Let's dive in by starting with the guy responsible for it all, head coach Nick Sirianni.

You've probably heard a lot about Sirianni's affinity for using video while teaching over the past week.

On the surface that's a cute training-camp story for the dog days of August and not a bad idea when dealing with a younger generation indoctrinated into society with a natural affinity for streaming content in short bursts from smartphones that may or may not be evolving into an extra appendage.

The Eagles' rookie mentor has used videos of everyone from NBA legend Kobe Bryant to hot-dog-eating superstar Takeru Kobayashi, the latter clip expressing a very interesting take on fundamentals.

"Our fifth core value is fundamentals, and Kobayashi, there's this video of Kobayashi and Joey Chestnut competing and they go, ‘Why is Kobayashi so good at eating hot dogs?’" opined Sirianni. "The details and fundamentals he puts into it -- he has to have the right temperature of water to dunk the thing. He has to break the hot dog perfectly in half.

"So my point on that is, yeah, we are all seeing it and watching it, and it’s like, ‘What's the point of that?’ My point is, if you want to be the best in the world at what you do, right, on the football field, it comes down to the little things and that right there was a fundamental talk."

From an existential standpoint that's a unique way to reach a group of young men who will start to zone out after hearing the same voices every day, something Sirianni is very cognizant of due to his teaching background.

"At some point, my voice, they are going to hear me and I'm going to talk a lot but at some point, it can't just be my voice saying it," the coach explained. "So I have these things, these messages that I want to get across. So how do I get those messages across? I think it's the art of storytelling. I guess I'm a good storyteller. So you can have this storytelling, but then visual is so big in our profession."

All of this would make an interesting doctoral thesis but what are the lessons being taught? And is there a better way to teach them to NFL players?

After watching Hurts' Saturday practice, maybe stressing the fundamentals of a Carson Palmer via video is a better idea than the more layered approach of explaining their importance across any competition, even something as goofy and endearing as hot-dog eating.

And maybe waxing nostalgic about Bryant's legendary worth ethic where Kobe might head back to the gym after a late-night meal with Allen Iverson just as A.I. was hustling to hit the club isn't translated to an environment where 75- to 90-minute practices are the norm due to a decree from above.

To be fair, though, Sirianni is a creative guy using a wide array of techniques.

He's surely showing Hurts cut-ups of brilliant footwork and pristine arm angles. The coach has also made the best of his limited practice time on the field with briskly-paced sessions that maximize what's available to him. Then there are the pop quizzes in team meetings or even the halls of the NCC to keep everyone engaged.

"He’s holding everybody (accountable)," running back Miles Sanders said when discussing his coach. "He puts all the film up on the screen in front of everybody. Everybody’s nervous in there. He does pop quizzes every team meeting. That keeps us in our playbooks, testing our knowledge on the playbook and how we’re learning it. I like it. It’s keeping us all on our toes, and really keeping us locked in."

Sanders, of course, is also not all that upset over the length of practices:

“I love it. They’re not three hours long,” he said. “I love how they’re making it very fun. Just gotta have fun with this stuff because training camp is not fun at all.”

Finally, you have the constant competition like what Avonte Maddox described as a third-down jamboree Saturday which enabled the offense to save a little face on a run-of-the-mill Nick Mullens to Jason Huntley 3rd-and-5 conversion to punctuate the session.

"It’s very important to compete and it’s very important to win, to do our best and compete in whatever drill that may be," said linebacker Eric Wilson, who looked like Derrick Brooks while baiting Hurts into an ugly interception during the Saturday session. "We did competition in special teams – linebackers vs. linebackers, skills (returners and gunners) vs. skills. That’s important, to compete every day, get better with yourself and make the person across you better."

By Sunday, in front of nearly, 26,000 at Lincoln Financial Field, the bleeding was slowed as Hurts was back to making some plays, most notably a beautiful 50/50 ball in which Quez Watkins went up over Anthony Harris to high point the football and the QB’s best throw of the might, an outside-shoulder fade to Travis Fulgham for about 30 yards.

The cut wasn’t closed though.

Along with the ups of the occasional big play from Hurts were the downs of shoddy decision-making whether that stems from holding onto the football too long, throwing into double coverage, or flushing too quickly instead of climbing the pocket.

When you understand the Jeffrey Lurie Eagles have always been obsessed with innovation and the race to stay ahead of the imaginary NFL curve it comes into focus why they landed on Sirianni, who seems tailor-made for that philosophy as a young coach who embraces out-of-the-box techniques to get the job done.

The caution sign to that isn't exactly flashing yet but after the next PBU parade by a defense that isn't supposed to be world-beaters, you should at least be reminded that by definition, innovation is always new but not everything new is innovative.

The value of an idea lies in its use.

More so, the bells and whistles always take a back seat to the talent, something Sirianni himself admitted last week when asked by PhillyVoice about another Lurie passion — analytics.

That’s four different uses of “always” by Sirianni and the redundancy should not go unnoticed.

Right now, Sirianni might rather have a Jimmy or Joe at the controls of his offense because the Jalen running it just doesn't look good enough.