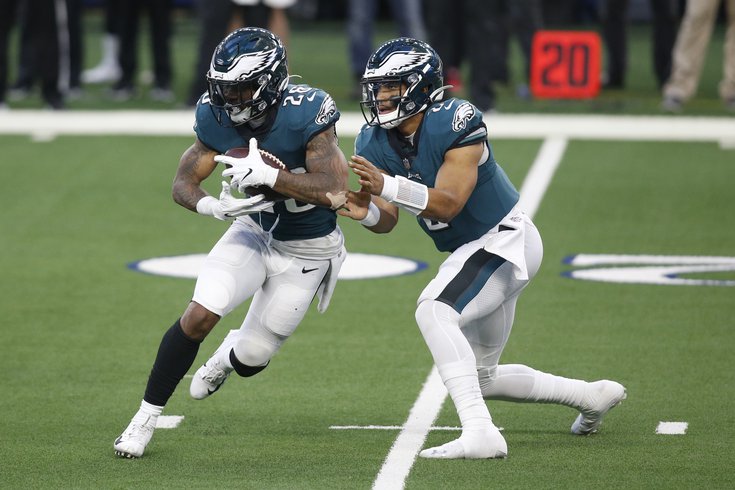 One week from now, football. A full slate of it.

That seems to be the thing most of us are clinging to, just like we do this time every year as the summer begins to turn to fall. College football officially got underway this weekend, and now, the countdown is on for the start of the NFL season, which will kick off on Thursday when the reigning champs, the Bucs, host the Cowboys in primetime.

Eagles fans, however, will have to wait a few more days to watch their team take the field in Atlanta for the first game of the Nick Sirianni Era. And despite the team coming off a miserable season that resulted in the firing of their head coach and trading away of their franchise quarterback, there's a surprising amount of optimism surrounding this team, despite warnings from some of us that this season could be a learning year for both the team and the fans — which is totally fine and not a sign of the apocalypse. After all, a rookie head coach, an inexperienced starting quarterback and a summer of increasing COVID case counts all leave the Birds in a difficult spot to succeed. But that isn't stopping some people from hyping up the Eagles.

So today, in the midst of a holiday weekend and seven days from kickoff, let's try to stay positive about the Birds. And if this isn't your style — you know, if you're a doom-and-gloom Negadelphian through and through — don't worry. There's still a whole week left, and we'll have plenty more season preview material coming out this week, from season-long over/unders to Jimmy Kempski's predictions and much more. And it's almost certainly not going to be as sunshine and rainbows as what you're about to read. Let's dive right in to our latest edition of What They're Saying about the Eagles...

Over at The Athletic, Bo Wulf asked a dozen different Eagles which players they thought were primed for a big season. You probably already saw Fletcher Cox's answer — Quez Watkins and Josh Sweat — which made the rounds earlier in the week. And while those two were popular answers, a trio of offensive players all think the second-year quarterback is set for a big season now that he's the starter. Here's more from Wulf's piece:

Jalen Reagor: J-Hurts. That’s the captain, so he’s got to lead us, for sure. I just believe it. And I feel like he has a big chip on his shoulder. And the way he talks about it. He’s very intentional. Just on the bus ride over here (to joint practice with the Jets), he was just like, ‘Man, I’m in that mode.’ So I really think he’s gonna have a huge year. Gonna shock a lot of people.

Greg Ward: Jalen (Hurts). His attention to detail, preparation, his hard work. You just see it, man. He really wants it and I think he’s gonna show everybody what he’s made of.

Dallas Goedert: Offensively, I think we’ve got a lot of people that could. I think Jalen (Hurts) is gonna have a big year. Everything that he can do. Miles (Sanders) is bound for a big year. The running backs, the receivers, they’ve been looking really good in camp. Hopefully, the tight ends get the rock a little bit too. I think, all in all, our whole team should be pretty good.  [The Athletic]

And then there's Darius Slay.

I wish I had 50% of the confidence that guy has.

Romo high on the Birds

Another hot take that's been making the rounds this week comes from none other than Tony Romo, who said on a preseason conference call with the media that he thinks the Eagles could be a "surprise team," as in they could be a lot better than people are expecting.

“We heard in the offseason, the owner Jeffrey Lurie talk about how they were after last season having to start over I guess you could say. I actually think this team still has a lot of talent and they hired a great coach,” Romo said. “I think this organization is really well built.”

Romo then took things one step further and, while acknowledging it would be an uphill battle to do so, the Eagles could “surprise” a lot of people.

“I think the Eagles are going to be a surprise team. If you go in and think they’re really not ready, they could shock a lot of people and go 10-6 or 11-5 very quickly,” Romo said. “That’s an uphill battle right now but I still think they have a lot of talented players and the coaching staff is good. I wouldn’t be surprised at all if the Eagles have a great season this year.”  [CBS3]

Now we go from a former rival of the Eagles to a former team executive in Joe Banner. As it turns out, Romo isn't the only one who thinks people are underselling how good the Eagles could be this season. Here's more from Banner's weekly Q&A with Inquirer writer EJ Smith...

JB: I think people are maybe underestimating them a bit. I don’t think they’re about to be great, but I saw an article that predicted the Eagles would come in last place in the division. I just think that’s not reflective of what’s most likely to happen. Now, you have a huge question right now at quarterback, so it’s much harder to predict in that circumstance than most, but I think there’s reason to be optimistic. The defense will be good, maybe even very good. Assuming they stay healthy, the defensive line is about as strong as they’ve had, other than maybe Super Bowl year, and that tends to dictate how the defense does.

The offense is very hard to predict because some of it’s just going to depend on [Jalen] Hurts. They do have better weapons, if healthy, than they’ve had in a while, but guys that will be a lot better in a couple of years than they are now. The line is very good if everybody’s healthy, but it’s an old line and has players on it that are coming off injuries. I think they’re going to be a solid, competitive team, and getting good will be less of a long ride than some people are thinking. I’m not predicting some great season or some deep run in the playoffs, but I’m picturing kind of a middle-of-the-pack, very competitive team on a week-to-week basis. It could go better if Hurts is better, or it could go worse if he’s really not the guy, although between [Joe] Flacco and [Gardner] Minshew, they could make a change to someone who could at least keep them competitive. Not many teams can do that.  [Inquirer.com]

Full disclosure, I am on the record as saying I think the Eagles will win six games, and that they're more likely to win five than seven, but I wouldn't mind seeing them prove me wrong. For starters, it would not only make my job a lot easier but also a lot more fun. Beyond that, this team is infinitely more likable than the 2020 team, and seem like they're having a lot more fun than a year ago at this time. Playing loose like that might be the recipe for success, so maybe this team does surprise the people out there like me who are down on them. We'll learn a lot more in a week from now.

Over at Bleeding Green Nation, John Stolnis offered up 10 bold predictions for the 2021 Eagles season. And while not all were good, like Gardner Minshew making four-plus starts — if that happens, either Jalen Hurts is seriously injured or things have seriously gone off the rails — these were two of the more hopeful ones...

DeVonta Smith Will Be Offensive Rookie of the Year

Maybe this isn’t a bold prediction, but I think a lot of people are sleeping on the impact Kyle Pitts is going to have on the league this year and Smith might not be the sure-fire favorite some are predicting. But I do believe he’s going to emerge as a DeSean Jackson-like star in his first year in Philadelphia and, at the end of the day, will take home the rookie hardware.

Miles Sanders Rushes for Over 1,000 Yards

While I’m not enamored with Sanders’ receiving ability, it’s pretty clear he’s emerged as a true threat running the football, both between the tackles and outside in space. In those 12 games last year he averaged 5.3 yards per rush and piled up 867 and 6 TDs, an improvement from his 4.6 yard per attempt and 818 yards in 2019. I know Jeffrey Lurie doesn’t like his team to run the ball very much, but if Sanders stays healthy for a full 17-game season, he’s a lock to go over 1,000 yards on the ground.  [Bleeding Green Nation]

We'll have our own over/unders going up in a few days, and you can bet there will be a Miles Sanders one on there.

Speaking of the Eagles running back, Tim McManus of ESPN believes — like many of us did this time a year ago — that Sanders is poised for a big season. For a variety of reasons, that failed to happen in 2020.

But McManus cited five different reasons why this year might be the one, from improved health to the added dimension of Hurts being under center (and also presenting the threat to run on any give play) — not to mention the fact that Nick Sirianni could opt to present a more balanced attack on offense. If that's the case, Sanders' strong numbers from his first two seasons could get even better.

As his story points out, Sanders wasn't as good in many areas in Year 2, but he still put up some strong numbers...

He flashed big-play ability, becoming the first Eagles player to record multiple rushing touchdowns of 70-plus yards in a single season. And he was the first running back to break three runs of 70-plus yards since 2012 when Jamaal Charles, Chris Johnson and Adrian Peterson did so.

Put his two seasons together, and Sanders lands in pretty impressive company. He has produced the fourth most scrimmage yards per touch (5.7) since 2019 among running backs with at least 300 touches behind the Los Angeles Chargers' Austin Ekeler (6.3), New Orleans' Alvin Kamara (5.8) and Carolina's Christian McCaffrey (5.8). He is fourth in the NFL in rushing average (4.9 yards per carry) over that span and leads the league in rushing plays of 60-plus yards (4).  [ESPN]

If you haven't had your fantasy football draft yet...