How many games will the Eagles win this year? Like that even matters... 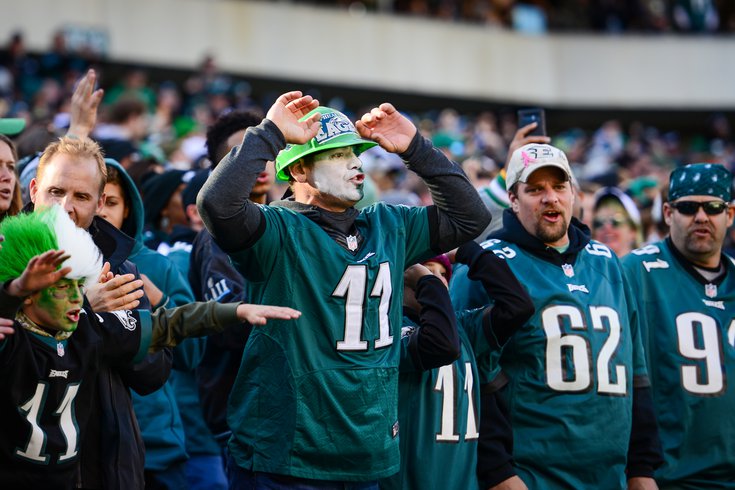 Eagles fans could be in for a long season if they're only worried about wins and losses.

What do you think of the Eagles this year?

That's a common refrain throughout the Delaware Valley during the summer months as the local football team prepares for yet another season. You have probably both asked and been asked that question at least once in the last month. And if you haven't, you likely will be soon with the season opener now just over two weeks away.

When you ask a friend or family member for their assessment of the Birds, it's typically something on the positive end of the spectrum, even if conventional wisdom suggests otherwise.

They could surprise some people if... or

I think they have a shot at the division because... or even

Ten wins isn't out of the question since...

You're fans, after all, and even in a city called Negadelphia, there's typically more optimism this time of year than there is in, say, mid-November. Hope springs eternal and all that. You're expected to be positive — and even if you aren't quite convinced of what you're saying, you'll say it anyway because you don't want to be that one person who doesn't believe that one of the worst teams in the NFL last season can suddenly make the playoffs while undergoing a rebuild that included a coaching and QB change.

So...what do you think of the Eagles this year?

When you're supposed to be an objective reporter and not a fan, that question hits different. And you get asked it A LOT. Like, everywhere you go. And you can see the look in their eyes basically begging you to give a positive answer since your job supposedly makes you some sort of authority on the subject. If you simply affirm their positivity, it validates all that hope they've been grasping on to in the face of all logical fact suggesting otherwise.

Just say it. Say they're going to be good. You know you want to.

But that same job that gives your opinion credence also comes with an ethical obligation to the truth. So a simple question sparks an internal ethical debate about where to draw the line between your professional responsibilities and your mental well-being. Do you do the easy thing and tell them that you think the Eagles have a chance to be good if the coach and QB are up to the task? And that the division is wide open for the taking? Do you straight up lie and feed into that false hope?

Or do you do the right thing and tell them that you think the Eagles will win about six games this year? That you think they're much more likely to win four or five games than they are to win seven or eight? That you think an above-.500 finish is a pipe dream that would require a ton of help from the rest of the division (and then some)? Do you try to get all that out before telling them that you also don't think any of that really matters?

Because that's the main point here. Worrying about wins and losses this season will likely not end well for Philly fans. And that's what I try to impart on anyone who asks me about the Eagles' chances this season. It doesn't particularly matter how many games the team wins, whether that's three games or 10 games.

What matters is that this team is better in Week 18 than it is in Week 1. It matters that this coaching staff and front office get to see a full season out of Jalen Hurts — and more importantly that they come away confident in their belief as to whether or not he's the guy going forward. It matters that DeVonta Smith proves his size won't be an issue at the NFL level. That Jalen Reagor and Quez Watkins prove they're capable. It matters that Jordan Mailata holds up for an entire season at left tackle.

It matters that Derek Barnett, Josh Sweat, Dallas Goedert and other young players in contract years take a step forward. It matters whether or not Miles Sanders shows improvement. It matters that Alex Singleton proves 2020 wasn't a fluke. And, more than anything else with perhaps the lone exception of the quarterback evaluation, it matters that Nick Sirianni and his staff prove that they're not only competent in drawing up and executing a game plan, but that they also can develop players.

If the majority of these things happen, the Eagles season will be a success no matter how many games they win. If they're trending in the right direction at the end of the season, even if they finish near the bottom of the division, there will actually be reason for that hope this time next summer.

This isn't like the tanking years for the Sixers. This team isn't trying to lose — although losses won't be the worst thing since, as the owner himself admitted, this is a transition period for the organization and high draft picks never hurt — but rather a team trying to figure out it's identity on the fly, which can sometimes be a bumpy ride. But like those tanking years for the Sixers, 2021 for the Eagles should be more about process than results.

So when people ask me what I think about the Eagles this year? How many games I think they'll win?

I try to thread that needle between crushing their hope and blowing it out of proportion. I start by telling them what I just told you. I tell them that they'll enjoy the season a lot more if they don't pay attention to wins and losses and rather focus on the Eagles being better at the end of the year than they were at the beginning of it. I tell them there's no guarantee that happens, but viewing things through that lens will certainly make for a more enjoyable season than one that hangs on the results of every play of every game.

Then I remember what watching an Eagles game is like. How little room there is for nuance in the moment. How it goes from Super Bowl dreams to fire everybody based on the result of one play. I start to wonder if maybe Philly fans prefer it this way. That they don't actually want to enjoy Eagles games. For better or worse, they want to be tortured by them, whether that's because the team is so bad that it's hard to watch or because they're so good that the stress makes it equally hard to watch. Their tolerance for pain is so high that anything in between is just boring at this point.

Even after a season like last year, in the middle of a year like 2020, they can't help themselves...

OK, but seriously how many games do you think they'll win?

Eventually, because I don't have much of a choice, I get to the part where I say 6-11 is the most likely outcome and that I think their hopes of a division title are fantasy. They cringe, try to convince me otherwise and, on rare occasions, tell me I'm actually the biased one because I'm in the media (which, *rolls eyes*). We go our separate ways, with my only hope being that they take my advice. Otherwise, they're in for a long winter and in six months they'll confusedly ask me...

What do you think went wrong with the Eagles this year?