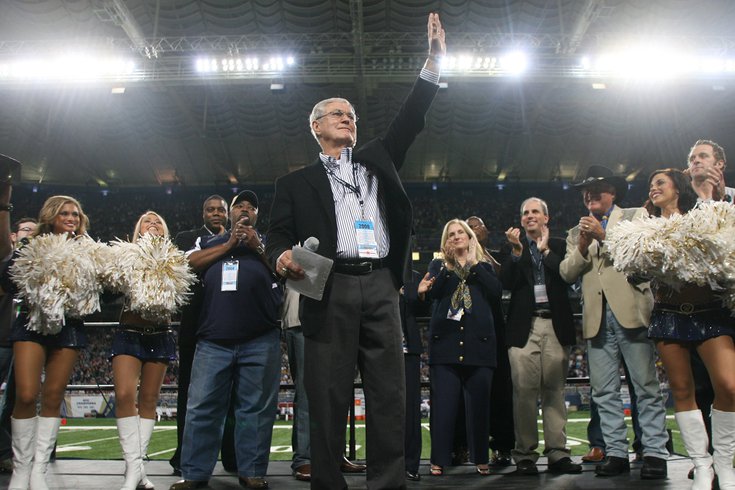 Former Eagles head coach Dick Vermeil will be inducted into the Pro Football Hall of Fame this weekend.

Former Eagles head coach Dick Vermeil might finally get the Hall of Fame nod that Birds fans have been pushing for years.

Vermeil, 84, has been selected as a coaching finalist for the Pro Football Hall of Fame's 2022 class. The Super Bowl-winning head coach was selected from a group of seven candidates as a finalist by the Coach Committee, which he said "had his deepest appreciation and gratitude."

“I am overwhelmed," Vermeil said. "I’m not sure I belong [in the Hall of Fame]."

Vermeil will be voted on independently from the other finalists. The Hall of Fame class must consist of at least four and no more than eight inductees. The 2022 enshrinement ceremony is scheduled for next summer in Canton, Ohio.

Vermeil coached the Eagles from 1976-1982, racking up a 54-47 record over seven seasons and leading the Birds to their first-ever Super Bowl appearance in 1980. Vermeil finished with a 3-4 postseason record in four consecutive playoff trips from 1978-1981 with the Eagles.

From 1997-1999, Vermeil coached the "Greatest Show on Turf"-era Rams and helped lead the franchise to its first-ever Super Bowl title by defeating the Tennessee Titans in his third and final season. Vermeil then coached five seasons in Kansas City, where he earned one division title and playoff appearance.

Eagles fans have been calling for Vermeil's induction into the Pro Football Hall of Fame for years, and rightfully so.

Vermeil is without question one of the greatest coaches in franchise history for bringing winning football back to a team and city that hadn't experienced success in almost two decades.

Vermeil had a winning record and playoff appearance, the franchise's first in 18 years, by his third season in Philly. In fact, the Birds hadn't won a postseason game, captured a division title or even made the playoffs since 1960.

All of those droughts were brought to an end during Vermeil's coaching tenure, which reached its apex when the Eagles made it to Super Bowl XV against the Raiders. Vermeil is now a member of the Eagles Hall of Fame and remains beloved by Birds fans to this day.

Vermeil has been under strong consideration for the Pro Football Hall of Fame over the last several years. Maybe now Vermeil's long-awaited moment of glory will finally come calling, a moment that Eagles fans are sure to be rooting for.