Mailbag: Should the Eagles add a wide receiver? 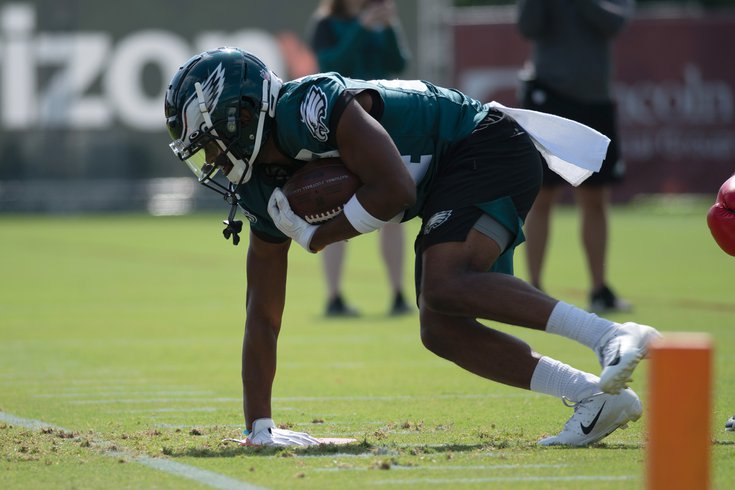 In our Eagles chat on Mondee, there were a lot of questions that we could not get to in time or other questions we did answer but could use more color. And so, let's do a mailbag post to answer some of the overflow, as well as some commonly asked questions on Twitter and via email.

Question from JJ: While I agree that a "veteran WR" is not needed and would only take snaps away from developing players, after Smith, Reagor, and Watkins, I don't see much worth developing. Should the Eagles do what they can via player for player trade or waiver wire pick ups to bring in better talent with upside at the WR position?

Sure. If the Eagles can make a bust-for-bust trade (like, ohhhh, sayyyy, Andre Dillard for N'Keal Harry), then go right ahead. And as you mentioned, waivers will be worth watching this year, since (a) the Eagles have bad depth at a lot of positions, and (b) they'll be sixth in the waiver order process and will have waiver acquisition opportunities that they usually don't have.

I think there's a pretty decent bet that some waived wide receivers will have more upside than guys like J.J. Arcega-Whiteside and Greg Ward, for example. Those types of younger, developmental players would make more sense than trading for a mediocre vet who is only going to take snaps away from Reagor and/or Watkins, which serves no long-term purpose whatsoever.

Question from Jacko: Would you make this hypothetical trade: Andre Dillard to the Colts to guarantee the No. 1 pick for Carson?

I would trade Dillard for a ham sandwich, so yeah, I'd make that trade in half a heartbeat. The Colts would not.

Question from Quickee: Could Dillard anchor in college? I mean Jeff Stoutland knows how to teach people right? How could you be a first rounder and not know how to anchor?

The appeal of Dillard coming out was his elite footwork and athleticism. Anchoring was definitely a concern, along with run blocking. I had actually taken a look back at some of his college scouting reports, and this one nailed it.

Coaching can help correct some technique issues that will put a player in a better position to anchor against power, but ultimately, Jeff Stoutland can't flip a switch and make Dillard suddenly have more functional strength. That's on the player and his desire to be a great player, or not.

There are plenty of offensive tackles that had anchoring concerns coming out, who fixed them and became good players in the NFL. Dillard has actually gone backwards since his rookie season, in my opinion.

Question from Cesar: Who has a bigger year? Quez Watkins or Jalen Reagor?

I think Quez is faster, runs better routes, has better hands, and is better at making contested catches than Reagor, so, him. It also helps that the coaching staff recognizes the way that Quez has played this summer, as he seems to be ahead of Reagor in the pecking order, at least based on playing time.

We'll see if the powers above allow the sixth-round pick to play over the first-round pick.

Question from Grogu: Lord Jimmy, is it really true that, according to Over the Cap, the Birds only have $4 million in cap space next year?

OverTheCap is an invaluable resource, and they do an amazing job, across the board. Their future cap space pages show a snapshot of how much money each team has allocated to their players for future years, and they estimate what the cap will actually be. For example, the NFL set a ceiling on the 2022 cap at $208,200,000, which is what OTC uses, but it's possible that it could be lower.

It also doesn't factor in (because it can't yet) what each team will roll over from their unused 2021 cap. In the Eagles' case, they have a little over $16 million in space in 2021 that they can roll over into 2022. And then obviously, it does not factor in likely cap casualties during the 2022 offseason.

Of all the great features on OTC's site, I think the their future cap pages, while valuable, are probably the most misunderstood.

Question from Talent Evaluator: So the Eagles stayed vanilla, to the point where I don’t think they blitzed in two games, and their offense was going three-and-out quite a bit. The thought was that it was to evaluate individuals. But don’t you like have to play real football to evaluate how players will play it? I know there are joint practices, but come on. It was painful watching DBs get roasted play after play with no pressure, or QBs pumping and getting sacked with nobody open.

I think first and foremost, they want to keep their important players healthy. Secondly, they don't want to show much because they would like to preserve the schematic mystery that comes with a new, first-time coaching staff. And then thirdly, yes, I think they wanted to evaluate the talent level of some of the younger guys fighting for jobs. They want to see players make plays, not the scheme or a play call be a reason a player made a play.

Is it a bad product for the fans watching at home? It sure is! But ultimately, in terms of what is best for the team, I think their approach makes sense.

Question from Footba11 Joe: Jimmy, do you really get paid based on number of clicks? Can you tell if they're clicks from Twitter? Does it matter if someone has adblock on? What keeps Kristen Roach of Roach Realtors from just opening and closing your articles?

In my almost seven years now with PhillyVoice, I have always gotten paid a salary, with no bonuses for click benchmarks, though I do joke sometimes by saying, "Thanks for your clicks." I'm thankful for the straight salary setup, because I'm not incentivized to write clickbait articles. Once upon a time, I exclusively covered Tim Tebow (when he was with the Jets) for NJ.com. They had a click-incentive pay structure, and were the micromanagiest group of turds I ever worked for. Anyway, yada yada yada, I had that job for fewer than two weeks.

Of course, that doesn't mean that clicks don't matter, here or anywhere else. If nobody is reading your stuff, then obviously that's not good.

And yes, we can see where the clicks are coming from. We can also see "unique page views" vs. total page views. The "uniques" are how many different people have read your articles, based on unique IP addresses. Kristin could click all day if she wanted, and that might boost total page views, but she would only count as one "unique."