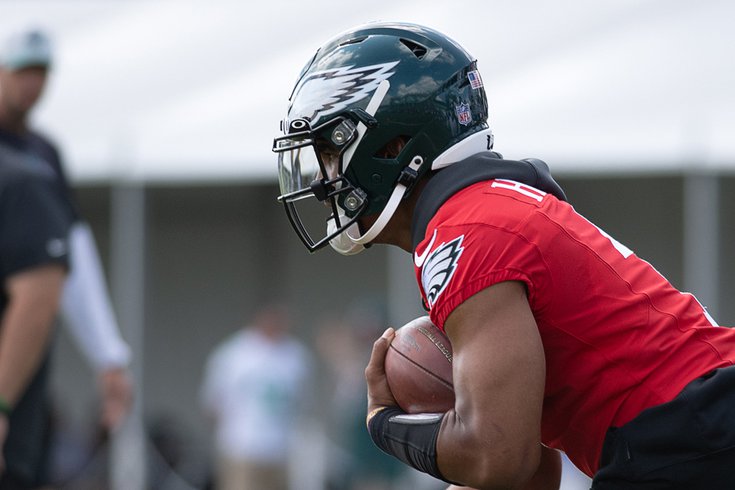 Day 16 of Philadelphia Eagles training camp — a joint practice with the New York Jets in Florham Park, NJ — is in the books, and the Birds had a nice day. As always, we have notes.

• Generally speaking, the Eagles outplayed the New England Patriots during joint practices last week, before the Eagles' backups (for the most part) got wrecked in the preseason game. Similarly, the Eagles looked more crisp than the Jets on both sides of the ball. My personal focus was on the Eagles' offense today, as the Jets' setup made it difficult to watch both fields simultaneously. The Eagles' offense made more plays than the Jets' defense. When I had a chance to glance over at the Eagles' defense against the Jets' offense, I saw a lot of incomplete passes, and cheers from Jets fans in attendance (who were mostly watching the Jets' offense) were few and far between.

• Jalen Hurts wasn't perfect today by any stretch, but he did make some really nice throws, particularly deep down the field. He hit Dallas Goedert in stride down the left sideline for a long TD, and he also connected with Quez Watkins in the same area of the field, this time as he was rolling to his left. More on that in a minute.

If we're going to quibble about Hurts' day, he held onto the ball longer than he ideally should on a few snaps, notably a post corner route by DeVonta Smith that was open but came out too late, and a quick throw to an open Zach Ertz that he didn't like for some reason. He was also inaccurate on a few throws to the intermediate part of the field, including a wild overthrow of Smith on a deep dig.

But on the whole, it was a nice performance, and there was more good than bad.

• As noted above, we mentioned that Hurts connected with Watkins down the field. More specifically, Watkins went up and high-pointed a Hurts throw, and was able to complete the spectacular catch. He landed hard on the ground, and went inside the Jets' facilities for a bit, but later returned to practice.

After practice, Fletcher Cox was asked who he believes is in for a big season. He mentioned Watkins and Josh Sweat. That feels like especially high praise coming from an All-Pro DT.

• I tried to pay close attention to the Eagles' first-team wide receiver configurations. Watkins was the "No. 2" receiver, in that he was on the field with Smith when the Eagles were in two-TE sets. When the Eagles went to 11 personnel (three WRs), the most common configuration was Smith as the X, Jalen Reagor as the Z, and Watkins in the slot, though they did move around some.

They are clearly the top three receivers right now, and it's a small group. Smith is listed at 6'0, 170, Reagor at 5'11, 197, and Watkins at 6'0, 193. They're also fast, which in theory could be a great complement to a strong rushing attack, in that safeties won't be able to creep up into the box, or they risk the ball going over their heads.

• One of the receivers that I haven't often mentioned, probably because he was a late addition to the roster after camp was already underway, is Andre Patton. He had a nice leaping catch today, and has had a better camp than J.J. Arcega-Whiteside and Travis Fulgham.

• One of the reasons I focused on the offense today was because I wanted to get a look at Le'Raven Clark. Re-reading that sentence, I sound like such a nerd. Anyway, Clark has a small window of opportunity to show that he can be a swing tackle for this team. If he can, that could make Andre Dillard more expendable.

My first impression of Clark was that he looks athletic enough, and he won pretty much all the matchups that I saw of him in 1-on-1's and 11-on-11's. What really stood out was his length. On paper, you can see that he has 36⅛" arms, but it's also rather obvious on the field that when he locks those bad boys out, it's game over for edge rushers. I like him. It'll be interesting to see how he performs in the actual game.

In 1-on-1's, Dillard got wrecked by some guy named Jeremiah Valoaga. Dillard was better in 11-on-11's.

• Outstanding job by Chris Franklin of NJ.com for bringing sunscreen. This was probably the hottest day of camp, and at an "away" practice, the rest of us idiots forgot some of the essentials.

• The Jets' facilities were really nice, and they even have a big tree on the field. 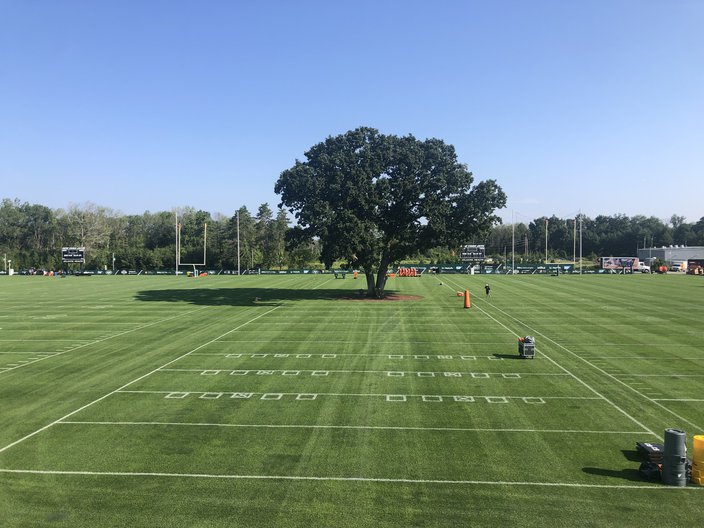