If the team truly wants to put him in a position to succeed as the starter, he'll be out there on Friday night. 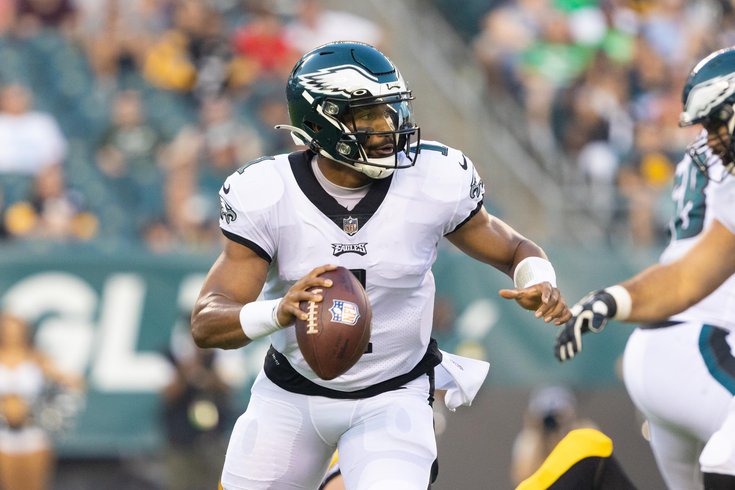 How often have you heard or even said that yourself? Usually, the context is explaining away the bad or even worse. Rarely is it meant to keep an even balance or perspective on the good. But this time it just feels different, almost as if it’s not about bad vs. good, so much as it’s about giving someone a fair shot and – more importantly – a realistic look at a position.

Jalen Hurts must play in the final preseason game against the Jets. It’s that simple. There is no way the Eagles can honestly say this is about giving Hurts a fair and honest look at the position without also giving him the basic preparation that comes from the preseason.

This has been the summer of competition for Nick Sirianni, including pushing this nonsense that Hurts must earn the starting job. Between Joe Flacco and Nick Mullens, Hurts may have won that job by simply existing. The new head coach is right about one thing when it comes to Hurts and competition, the second-year QB is playing for his future.

There are so many new parts to this Eagles machine that anything higher than finishing .500 would be unrealistic. The team is just not built to compete with the top dogs around the league. Which leaves the only other obvious conclusion about what this season is all about, figuring out if Hurts is your QB moving forward.

Anyone else who is holding on to their job, fighting to move up the depth chart or playing for a new contract is secondary. Even the secondary is secondary. It is irresponsible to throw Hurts, who missed the second preseason game with a stomach bug, out there Game 1 of the regular season after such a long break of not playing football.

Now, the counter that you will hear from the team and others is that you can learn a lot in these joint practices, so game minutes aren’t as important. I hate to do it to the new coach and old GM, but that is a steaming pile of nonsense. Protecting a young man from injury can only go so far, especially if he hasn’t had the game speed to work on this new system.

Sirianni explained following the blowout loss to the Pats that Hurts can still gain a lot of experience in these joint practices, implying – to me – that his young leader won’t be out there at all on Friday night. That’s two straight games missed, one by choice.

This is the time where execution matters more than a practice that can stop with a coach’s whistle. Nobody is pressing the OL and rushing after the QB with the intent of tackling to the ground. You miss a lot of game speed and tempo, as well as the threat of contact in these practices.

More than anyone else, it’s simply not fair to Hurts to keep him out of this game, but there’s also a trickle-down effect Sirianni will inevitably deal with if Hurts is a go. The entire starting offensive line will have to start, as a unit, and play until Hurts sits in order to best protect their young QB. But that’s fine too! They didn’t do it outside of the first couple of series in the first game. Oh, and...

Why is that so difficult for everyone to understand? Everyone runs a risk of being hurt when they are out in the preseason, Friday night would be no exception. I can’t promise you Hurts walks away unscathed from injury but having an extended period away from game action is an injustice to someone fighting to prove they belong here beyond the current season.

If you are a fan of Hurts and want him to succeed — or even if you're simply OK with him being the starter by default — this is the only approach you can have. Which begs the question, why can’t the head coach and GM see this? Don’t tempt the football Gods by just showing up Day 1 against the Falcons because it’s the Falcons.

Hurts needs the opportunity to continue to learn, grow and execute this new system. The WR group needs more in-game reps catching balls from Hurts. The line needs live action with a real pass rush coming at them. The running game needs time to balance out what Hurts and the air attack are doing. Miles Sanders and Kenneth Gainwell need game action working swing and screen routes.

All of this — while necessary — doesn’t guarantee anything in the form of a winning season. It does ensure the starting quarterback has the best chance to put his best foot forward. Let’s hope the young man is healthy because we already know he’s focused. In the meantime, the Eagles need to get back in the business of helping their signal callers instead of getting in their way.

• Sports betting is so gigantic that becoming mainstream sacrificed its nuance. I am no expert. I don’t sell picks. I’m not a tout with a 900 number. But I listen to the people who make money in this industry with razor sharp lines of profit. Those people would be a makeup of smart (winning 55+%) bettors, sharps, bookmakers and lastly, people in my industry who are simply smarter than me. When it comes to betting NFL football, one thing unifies the group: betting the preseason. There is nothing degenerate about it if you like winning bets.

The regular season has some of the sharpest lines in sports and even live-betting is difficult. The preseason allows for more of a learning curve where books tend to adjust a little slower in-game. Do the research – if you watch college football this is rather easy – and apply what you know about roster battles. Use someone fighting for a roster spot as a barometer, QB battles where you may get more playing time for the starter and backup. All of this is simple for the already existing football fan. You already have the tools to make money before the regular season even starts.

Oh, and on a totally unrelated note, the Eagles are currently a four-point underdog against the Jets, according to Pickswise. Cheers to all of my fellow degenerates preseason bettors! A+

• I wanted to review the new Madden for you this week but so many people I know hated it. Debating what to do here, as I might just eat the cost to provide you with the necessary review you’ve been craving. I can’t imagine my own review will differ much from the consensus. Hopefully they took out that awful story mode. INC